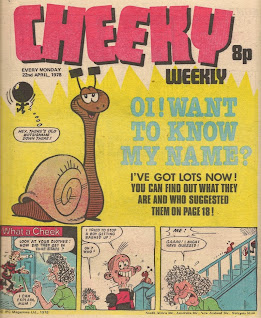 Cheeky is missing from the main cover pic this issue, as Snail borrows Manhole Man's 'Oi!' to ask us if we want to know his name, directing readers to the results of the 'name snail' competition.

Snail also appears in the What a Cheek cover strip, alongside Cheeky's Mum, the third time she has appeared on the cover, and the second time she has been in a what A Cheek strip.

While on his Sunday newspaper round, Cheeky delivers Auntie Daisy the school meals lady's copy of The Sunday Scorcher.  The calamitous culinarian tells him, as smoke wafts from her front door, that she's making him a special dish.  Cheeky gets increasingly worried as he sees her gathering the ingredients all week. 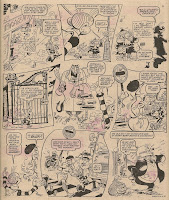 On Monday Cheeky reads the final chapter of James Bold's latest adventure, Tower of Terror.  When his furtive reading is discovered, Cheeky makes a curious comment, telling the Newsagent that this is the sixteenth time he has been found out.  I can count only 9 previous Suddenly pages.  Cheeky's remark that this is the last time he'll be discovered is also inaccurate.  Maybe the scriptwriter thought that the next James Bold tale would be the one that Cheeky will watch in the cinema, but the toothy funster will be returning to the newsagents for a further 9 weeks to read The Frightened Village.

In the What's New, Kids feature on page 14, freaky Frankie Stein pops in to tell readers about a new character in this week's Whoopee! - Dick Doobie, the Back to Front Man.  To see Dick's debut strip, head over to Peter Gray's blog, and don't forget to take a mirror with you. 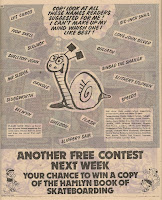 Name the Snail results are on page 18.  Disappointingly for the winners, none of the winning names were used in the comic strips.

Constable Chuckle is the subject of this week's Pin-Up Pal poster on the back cover, which is surprisingly early as he only made his debut in the comic dated 01 April 1978.  In the poster, the comical copper is seen enjoying a good chuckle, not noticing two felons making their getaway with a haul of stolen jewellery.