In this new series of posts I'll be looking at some of the advertisements that appeared in Cheeky Weekly. I'm sure that some readers begrudged the ads appearing in their favourite comic, thinking that a page promoting a new chocolate bar or ice lolly was taking up valuable space that could otherwise be filled with cartoon fun or thrills. However, the presence of advertising was of course crucial to the survival of the comic, or at least to maintaining an affordable cover price.

Cheeky Weekly's publisher IPC featured advertising across all its late 70s comics, although rival publisher DC Thomson, producer of iconic British titles The Beano and The Dandy among others, did not feature paid-for ads at the time. Those readers who resented the intrusion of ads into their comic reading no doubt enjoyed Thomson's ad-free approach, but for me it gave the impression that DCT existed in a strange, Scottish limbo with little relevance to the modern world, and contributed to my view that their titles were all rather old-fashioned when compared to IPC's output.

From today's perspective, Cheeky Weekly's advertising content gives us an insight into the leisure-time pursuits of late 70s children, or at least the products that the advertisers hoped would catch the imagination of kids of the day.

In this first look at the ads, I'm focusing on the IPC ads relating to Krazy, the comic that spawned Cheeky Weekly, and which came to an end with issue dated 15 April 1978.

Our first Cheeky Weekly encounter with a Krazy-related ad was in fact promoting the 22 April 1978 issue of IPC's long-running title Whizzer and Chips. The issue being plugged was the first merged issue with Krazy, but surprisingly the ad doesn't lead with the news of the two comics joining forces, but focuses on the cut-out Space Spectacular, although Freaky from Krazy's Krazy Gang strip is the featured character. As there were no earlier ads for Krazy in the toothy funster's coimic, it may be the case that since Cheeky Weekly's debut issue on 22 October 1977, Krazy was considered a lost cause, and not worth advertising. 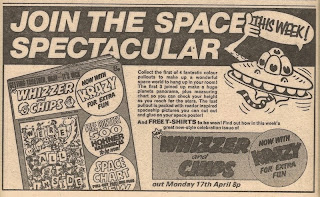 However, despite Krazy's demise, the title did get advertised again a number of times, the first occasion being on 06 May 1978, when an ad for that year's Krazy Holiday Special appeared. With a lead time of several months, this special was possibly instigated before the decision to close the comic was taken, but holiday special versions of IPC's comics often continued years after the weekly title had been consigned to comics history, as was the case with Krazy. 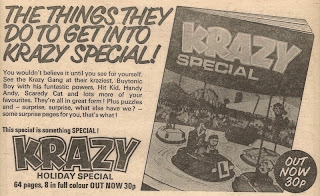 In fact another Krazy Special followed swiftly behind the first Holiday Special and, under the headline 'A Comic Comeback!', The Best Of Krazy was advertised in the 24 June and 01 July 1978 issues of Cheeky Weekly. A 'Best Of' compilation from a defunct comic was a rare event at this time (it's billed on the cover as an 'extra-special'), and it seems from the introductory message from the editor that it was a try-out for a larger format version of Krazy, but the fact that it was mainly reprint presumably limited sales and a revitalised Krazy never appeared, although the holiday specials and annuals continued. 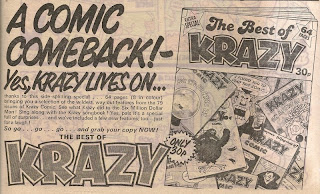 The 1979 Krazy Annual was advertised in Cheeky Weekly issues dated 07 October and 25 November 1978. Annuals were of course dated one year ahead, so that they had a shelf-life beyond the end of the year in which they were published, although newsagents usually sold any annuals still in stock after new year's day at half price.

The 20 October and 24 November 1979 issues of Cheeky Weekly carried two different ads for the 1980 Krazy Annual. These were the last Krazy ads to appear in Cheeky Weekly, which itself ceased publication in February 1980. 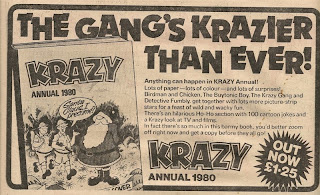 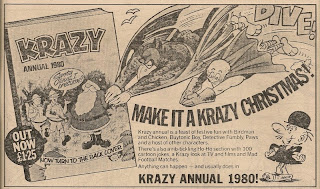 Email ThisBlogThis!Share to TwitterShare to FacebookShare to Pinterest
Labels: Krazy, The Ads