Cheeky started reading the 4th James Bold novel, The Frightened Village, in Cheeky Weekly dated 29 April 1978.  As with the two previous Bold Tales, the toothy funster crept into the newsagents for a free read of a thrilling instalment each week, reaching the final chapter in the 24 June 1978 issue.

As ever, James Bold is accompanied by glamorous 'assistant', Angel O'Mercy when his car breaks down on mist-shrouded Harkstone Moor, plunging the pair into yet another terrifying escapade… 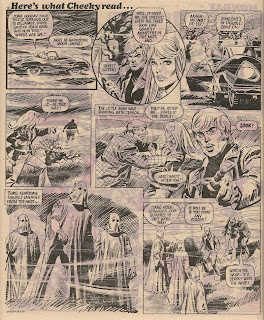 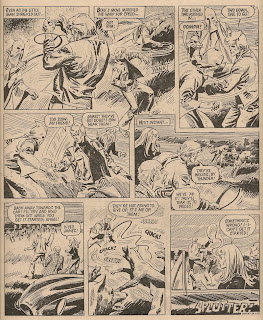 Angel succeeds in gunning the car's engine back into life, as Bold uses the whip to keep the wolves at bay while the man they rescued climbs into the vehicle.  Bold leaps into the car and tells Angel to head for the nearby village, but on hearing this, the man lets out a terrified scream of 'No!  Not the village!  Anywhere but there!', and threatens to throw himself from the speeding automobile.  Angel brings the car to a screeching halt and the mysterious man heads off into the mist.

Bold and Angel resume their journey and enter the village to find the church bell tolling and all the townsfolk fleeing in terror.  Suddenly, more of the hooded figures appear, using their whips to herd a group of villagers before them.  One of the hooded fiends spots Bold and Angel, pursuing them into a barn, where Bold knocks him unconscious.  Bold and Angel follow the main group of hooded figures and their hostages into the churchyard, but arrive to find the area deserted.  Angel rests against a tomb, but suddenly the lid opens and a hand drags her inside.

Bold finds a secret button that opens the tomb, revealing a chamber beneath.  Bold leaps in, to find Angel in the hands of a hooded figure.  The figure reaches for a hidden lever, and a trap door opens beneath Bold's feet.  As he plunges into the darkness, Bold grabs the edge of the pit.  The hooded horror is distracted by Bold's predicament, so Angel lunges and sends the shrouded fiend tumbling into the void.

Angel helps Bold out of the pit and the pair explore a tunnel, finding a huge cavern filled with sinister-looking plants.  As they emerge into the cavern a gate closes behind them, forcing them to move further into the subterranean jungle.  As Angel brushes past some tendril-laden vegetation, a plant lashes out and wraps her in snake-like fronds.  Bold snatches up a stick and smashes at the heart of the plant, which loosens its grip on our heroine.

As Bold frees Angel from her green assailant, a voice warns the pair to beware the poisonous spiders, just as dozens of oversized arachnids appear and begin advancing on our heroes.  Bold spies a crevice in the cave wall, and the pair enter to find they can climb up a chimney-like fissure.

Emerging into another cavern, Bold and Angel find themselves looking down on more hooded figures who are using whips to force villagers to work at the cave wall with pick-axes.  One of the hostages whispers to Bold and Angel, telling them to flee as they are in danger, and 'The Master has an all-seeing eye'.

Bold finds a store-room containing spare shrouds and whips, and dons a hood and robes.  Grabbing Angel and pretending that she is one of the captured villagers, he descends to join the others.  At that moment a voice is heard, which one of the hooded fiends identifies as The Master.  The voice tells the shrouded group that there is a stranger in their midst, and that they should all remove their hoods.  Before this can happen, Bold uses his whip to hurl a flaming torch from the wall into the robed band of fiends, and makes a bid for freedom in the confusion.  Bold is pursued into a tunnel by one of the hooded guards.  Seconds later a robed figure returns, dragging an unconscious form, also hooded, and tells The Master that the spy has been captured.

The Master decrees that the interloper should be thrown into the bottomless pit.  Angel rushes to the prone figure and tears off its hood, revealing that it is not Bold.  Bold, his ruse now blown, releases his captive, grabs Angel and, still dressed in the hood and robes, dashes with her down a tunnel.

Arriving at an underground river, Bold discards his disguise and he and Angel dive into the water only to hear the splash of approaching oars.  As the hooded crew propel their boat towards Angel, Bold takes a pen from his pocket, and unscrews it.  Using the barrel as a breathing-tube, he submerges beneath the surface of the turbid water.  When the hooded figures lean out of the boat to grab Angel, Bold surfaces and tips the small vessel, propelling the occupants into the stygian depths.

Bold and Angel swim off and soon find a door in the cave wall.  Entering the tunnel on the other side of the door, our heroes are surprised to emerge into a bustling kitchen.  The Master's voice booms out, alerting the kitchen staff that two intruders are at large.  One of the cooks spots our heroes and, telling them that any enemy of The Master is a friend of his, gives them two hoods.  However, the Master's henchmen simply have to follow the trail of wet footprints to unmask Bold and Angel, and The Master's voice orders that the captives should be taken to the great hall.

On arriving, The Master's booming tones are heard once again, telling Bold that he is to fight for his life against a master swordsman.  Bold is handed a blade and his opponent, dressed in black robes, scythes his steel weapon towards the ghost-hunter.  Bold parries the blow as his opponent rips down a curtain and throws it over our hero, then lunges with his blade.  The agile Bold leaps behind a statue, then springs out and with a flick of his sword, disarms the black-robed swordsman.

Bold and Angel race up the stairs and through a door, emerging in a room in which sits an elegantly-dressed, moustachioed man, who Bold recognises as Al Malone, wanted criminal, aka The Master.  Malone orders his henchmen to take Bold and Angel to separate rooms in order that they may change out of their wet clothes.  As Bold changes he speculates that Malone has been using the slaves to carve an underground lair, in which the criminal stores the proceeds of his crimes.

Things take a nasty turn for Angel when she has changed, as Malone's guards seize her and tie her on a sacrificial stone.  Malone then hypnotises her and tells her she must meet Bold in the garden and push him into the fish pond, which the criminal fiend has stocked with crocodiles.

Bold's lightning-fast reactions save him as Angel attempts to carry out Malone's plan, and he knocks her to the ground, causing her to strike her head, the shock of which breaks Malone's hypnotic hold.

Bold tells Angel to return to Malone and tell him she successfully carried out the hypnotic command.  Having done so, Malone tells his hooded guards to take her to the dungeons, but Bold, who has been watching from a gallery above, grabs a chandelier and swings into the group of henchmen, incapacitating them all. 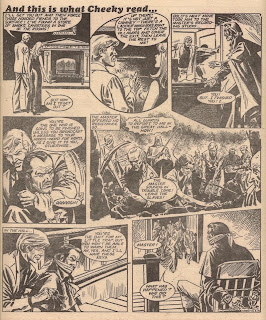 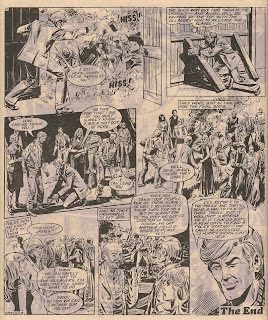 Bold's conspiratorial wink brings to an end a slightly different adventure.  In earlier tales, Bold has been pitted against nutcases who carry out elaborate ruses to fake supernatural events for no convincing reason.  In comparison, this tale is a relatively sober 'master criminal in underground lair' affair, with standard giant, poisonous spider and man-eating plant accoutrements.  The sight of Angel lying bound on what the script refers to as a sacrificial stone is a rather shocking one to find in a children's comic, but it turns out The Master's plan is to hypnotise her rather than something more final.

We know that the first James Bold tale in Cheeky Weekly was a rehashed Maxwell Hawke script from Buster.  I'm assuming that this tale was also based on a recycled Maxwell Hawke script.  From the list of titles on the Buster Comic website, there seem to be 2 possible contenders for the original script on which The Frightened Village (spanning 9 issues) was based - The Haunted Moor (which ran for 5 issues, assuming an unbroken run) or The Knell of Doom (14 weeks assuming unbroken).  I would therefore guess that The Frightened Village was an edited version of The Knell of Doom, since it would probably be easier to edit out sections of an existing script rather than writing new sections to expand The Haunted Moor.  UPDATE 07 July 2011 - I can now say that The Frightened Village was NOT based on Maxwell Hawke and The Knell of Doom.

The James Bold features originally appeared on pages 5 and 6 (apart from the first 2 Cheeky Weekly issues where all the contents were shifted back by the presence of an introduction page), but by the time of The Frightened Village, Bold was occupying pages 9/10 or 10/11.

I'm assigning the art credit on The Frightened Village to Mike White, but if anyone knows otherwise, please get in touch.

My work-in-progress summary of all the James Bold tales in Cheeky Weekly can be seen here.
Posted by Niblet at 14:51