The James Bold feature was an adventure serial, and from the character's name one might have expected an 007-inspired espionage tale, but James Bold was in fact 'an investigator of the supernatural' and 'steel-nerved ghost-hunter'. 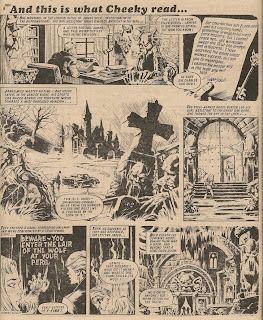 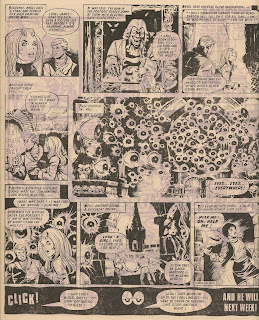 In subsequent instalments, a couple of creepy characters turn up at the mansion; Casper Cringe, who claims to be interested in buying the property, and one-legged caretaker Hercules Harbottle.

Bold recruits the pair to join the search, but the nefarious duo capture Bold and Angel, at which point a humanoid wolf-creature appears, but rather surprisingly it flees instead of attacking, and Cringe disappears as well.

Harbottle then explains that he only captured Angel because he is worried he'll lose his job when Carol inherits the mansion. Bold sees that Harbottle is telling the truth, and again accepts Harbottle's help in the search.

The adventurers then find a giant conservatory, stocked with immense flora (and, it soon transpires, fauna) from 'the unknown jungles of darkest Africa'. Another encounter with the wolf-thing ensues. Just as Bold is about to confront the creature with his rapier, a giant gorilla emerges from the undergrowth. It becomes apparent that the oversized ape is under the control of the wolf-creature, who directs it to crush Bold, causing our hero to drop his blade.

Despite a valiant attempt by Angel to shoot the supersized simian, the gorilla carries Bold up an enormous tree. Near the top of the tree, the ape pauses to tend to its bullet wound, at which point Bold grabs a vine and, Tarzan-style, swings out and back, dislodging the gorilla from its perch.

Returning to the ground, Bold finds Casper Cringe roped to a tree. Cringe tells Bold the Wolf captured him, and Bold ejects him from the premises, confidently (and accurately) predicting he won't be seen again.

Harbottle then leads Bold and Angel to the first of twelve bedchambers which must be searched. Angel finds Carol in bed in the first room, but immediately Angel's lantern goes out, and on reigniting it, she finds the girl is gone. Bold spots a pair of eyes peering through a painting on the wall, and stabs through the canvas with his rapier. A man emerges, who reveals himself to be Ted Tremble, clerk to Silas Scroll, the lawyer dealing with Sir Charles' estate. Luckily, the force of Bold's rapier thrust was deflected by Tremble's wallet.

There follows another confrontation with the wolf, who unleashes a giant crocodile to attack Angel after she falls into a lake under the mansion. Bold dives into the water and dispatches the reptile with his knife.

Deciding to take the initiative and lure the wolf-creature into the open for a showdown, Bold, alone and unarmed, shouts a challenge to the beast. Suddenly overcome by noxious fumes, Bold regains consciousness inside a cage, with the wolf-creature seated at a table nearby and holding Carol Masters captive. Carol tells Bold that the wolf is Silas Scroll, and that he is trying to force her to sign the Grange over to him. The wolf then takes Carol and leaves Bold alone in the chamber, but using 'every ounce of his tremendous strength', Bold forces open the door of the rusty cage.

Just as Bold returns to the main hall of the mansion, Silas Scroll arrives. Bold accuses him of being the Wolf, but Scroll explains his office was raided by the Wolf, who was searching for Sir Charles' will. Unable to find the will, the Wolf took Scroll's signet ring. Carol Masters saw the creature wearing the ring and therefore assumed it was really Scroll. Bold recruits Scroll to join the search for Carol.

The group then discover a locked room in which movement can be heard. Bold Hurls himself the at the door. 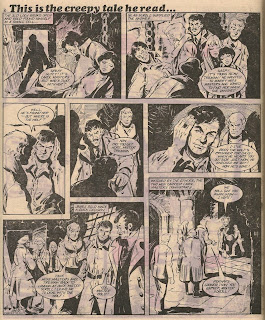 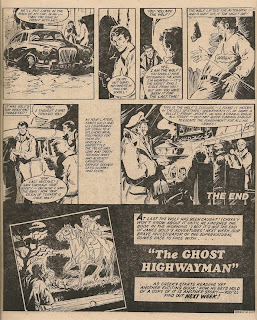 Bold demonstrates two surprising attributes in this tale. He seems to have an extremely trusting nature, repeatedly accepting help from those he considered enemies only minutes before. However, events proved he was right to do so, and possibly his brushes with the supernatural (assuming there were real supernatural elements in previous cases) have given him an insight into the psyche of those he meets. However it's hard to excuse his his recklessness in stabbing the figure behind the painting before knowing who it was.

A comment by John Gilheany on Peter Gray's blog points out that this tale seems to be a rehashed script that originally appeared as a Maxwell Hawke story, 'Maxwell Hawke in The House of a Thousand Secrets' in Buster from 29 October 1960 to 04 February 1961. The storyline and location name, as well as the supporting character names, in the sample pages posted on Peter's blog are identical to the giant ape sequence and final page in Cheeky Weekly, though the artwork is different.  The ending of the Maxwell Hawke version of the story is as unsatisfying as the Bold version, as neither explain why Tremain went to all that trouble.

Assuming there were no breaks in the story as it originally ran, the Buster version ran for 15 weeks, while Fangs of Fear spanned 11 issues.

Also, if anyone knows whether the later Bold stories are based on other Maxwell Hawke scripts, please get in touch.

This James Bold tale fitted into Cheeky's week as a novel he read in bed on Sunday evenings. Each episode ended with some misfortune plunging Cheeky into darkness; his Mum switching the light out, the batteries in his torch failing and other similar mishaps.

I'll be looking at the other James Bold serials in later posts.