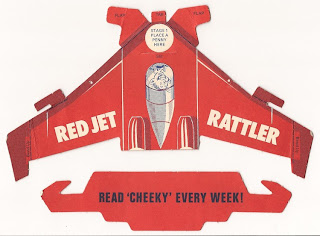 So what did those kids who had been whipped into a frenzy by IPC's ad campaign (which may have included a short ad shown on teatime TV) get as they flung 8p of their pocket money across the newsagent's counter?

Well, the first thing most kids would look for is the free gift. In those days there would usually be a gift in each of the first 3 issues of any new comic. How many of us bought the comic just to get the flimsy cardboard/plastic tat lurking within the pages? The publishers obviously hoped that by the third issue those readers lovingly fondling their collection consisting of a plastic spud gun, brown paper banger thing and rude-noise-making balloon would have been sufficiently entranced by the printed comic contents to become readers for life.

In Cheeky Weekly's first issue, the item tumbling from its pages was The Red Jet Rattler, a flimsy, cardboard self-assembly aeroplane that didn't so much fly as whirl from a piece of string. The string, as far as I recall, was not supplied, neither was the penny which was crucial to effective operation. The number of pennies lost as plane separated from string and disappeared into the neighbouring garden would probably make a substantial contribution towards the national debt.

So what was the link between aeroplanes and the contents of the comic? Er, none. At least an attempt was made to link the gift and the comic's contents by having Cheeky grinning daftly from the Red Jet Rattler's cockpit. Surprisingly, the underside of the Rattler reveals it was patented in Britain and the US! Possibly the stealth bomber was a further development of the same design (but without the cardboard Cheeky banner on the tailplane, which would presumably have lessened the stealth effect somewhat). 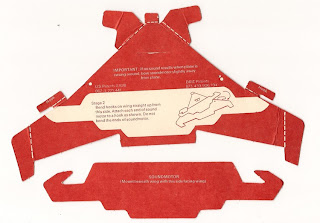