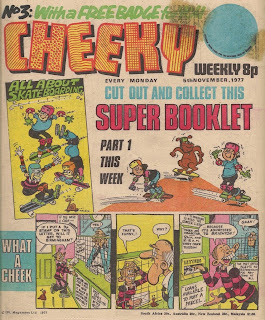 The cover of the third issue carries a super Friend of Cheeky badge, but gives prominence to the first part of the cut-out skateboard booklet, a ploy to keep kids buying future issues even though there are no more freebies on offer.

The booklet adds to the skateboard content of the comic, which already features the weekly Skateboard Squad strip, to capitalise on the current craze.  A few issues into the future we will see a week where the skateboard theme runs throughout Cheeky's pages. 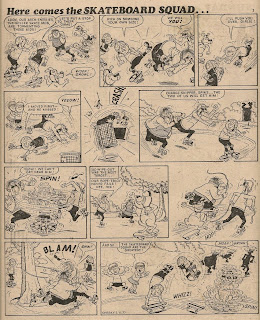 Back at the third issue, the Skateboard Squad are battling their arch-enemies, the Roller Skate Mob.  After some skateboard vs roller skate rivalry, the squad emerge predictably triumphant.

The booklet means this issue's 6 Million Dollar Gran story is reduced from the usual three pages to two.

This week's Pin-Up Pal poster (the final double-page-spread appearance of this feature) showcases Mustapha Million, who is seen wielding a bucket and spade, building what at first appears to be a sandcastle. On closer inspection the familiar beach construction is revealed to formed of gold dust. The subjects of the first three centre-spread posters (Cheeky, 6 Million Dollar Gran and Mustapha) are presumably the characters that the editor considers will be the most popular. 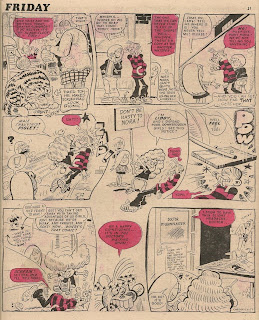 The Friday feature sees the first Cheeky Weekly appearance of Libby, the defender of weak females, although she had actually made her debut in last week's Krazy. Later in the day, Cheeky finds the Mystery Comic is in Doctor McCornplaster's waiting room (Cheeky Weekly's resident GP, Doctor Braincell, will be introduced in the 11 March 1978 issue).  The search for the Mystery Comic is the regular Friday framing device for presenting Mustapha Million's story, which is the only feature from the mysterious publication which we'll see until the comic undergoes a major revamp almost a year into Cheeky Weekly's run.

The title of this week's Space Family Robinson episode is 'Escape', the first of three episodes of the Robinson saga to share this title.  The Robinsons obviously do a lot of escaping.

Page 30 sees readers being invited to cut out a coupon they will need in order to enter 'a super competition' in the sixth issue - another attempt to prevent the kids spending their 8p elsewhere in the coming weeks.

In addition to the aforementioned Libby, other character debuts this week are Scruffbag (the school moggie who is familiar to readers of Krazy) and fellow feline Tired Tom (a completely new addition to the supporting cat cast), Do-Good Dora and Newsvendor (both of whom are unique to Cheeky Weekly).

Frank McDiarmid delivers all 13 Cheeky's Week elements in this issue.