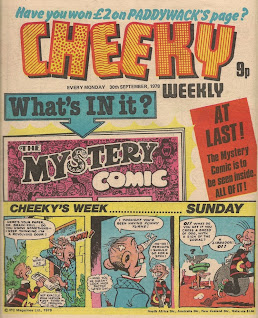 As we reach Cheeky Weekly's 50th issue, there are signs on the cover that big changes are afoot.  It appears that the whole Mystery Comic is on view inside, and a new cover feature, Cheeky's Week…Sunday, takes over from What A Cheek, although the three-panel gag format of the previous strip continues.

Flipping over to page 2 reveals some more changes - there's no title to the Sunday page - we're now to infer that it follows on from the cover's Cheeky's Week…Sunday feature, and a What Did YOU Do Today? diary-type section occupies the bottom of the page.  It also appears that Cheeky's favourite TV show, 6 Million Dollar Gran, has been moved to a mid-day time slot, which is fortunate for us readers as the Sunday evening element of Cheeky's Week came to an end last week.

On page 6, Cheeky explains the purpose of the new diary section of his pages.  I think his rather ill-mannered Hoi! is something he picked up from Snail. 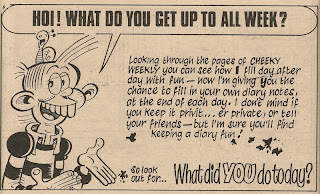 There's another new development when we arrive at the Monday feature - a panel reading 'Cheeky's Week…Monday' and displaying an extract from Cheeky's diary now introduces the strip instead of the Monday caption across the top of the page which appeared previously.  This, together with the What Did YOU Do Today diary area at the bottom of the page, appears once for each of the remaining days of Cheeky's Week in the comic (it doesn't appear on the Interval or second Saturday pages). 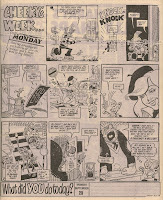 The Skateboard Squad title panel which appeared for the first time last week has been dropped in favour of a more streamlined banner-style introductory panel showing the team proudly flying a, er, banner.  The fact that the title panel now spans the width of the page means that the name of the strip can be displayed in full rather than being broken down into three words as it was last week.

On Wednesday, Cheeky dials 1978 in the time-travelling phone box and skips back a couple of days to the moment when the single copy of this week's Mystery Comic came off the printing press.  Never having seen a complete issue of this mysterious publication, we eagerly turn the page to view the cover, and get our first look at the Tub strip.  Next up is the first episode of Why, Dad, Why?, followed by the debut of adventure serial Mystery Boy (a retitled reprint of the Who Is Sandy? strip from Whizzer and Chips, 1971).

The following Mystery Comic page introduces us to the peripatetic pachyderm and his plastic-clad pursuer in the first instalment of Robert Nixon's 2-page Elephant On The Run, after which we encounter good old Mustapha Million, the only Mystery Comic character that we had seen up until now.

Rounding off the Mystery Comic section is another newcomer, juvenile jinx Disaster Des.

Page 21 returns us to Cheeky's Week for a look at the toothy funster's doings on Thursday, and Calculator Kid, who evidently survived the revamp, enjoys a robbery-foiling adventure on page 22.  Another non-Cheeky strip to remain is Paddywack, who fills page 25 with his customary confusion.

In the final panel of page 26, Cheeky tells us that there's an all-cartoon programme in this week's cinema show.  So after an interruption on the following page featuring an advertisement for The Superkids Club, promoting the Superkids range of boots and shoes, the first cartoon, in the form of a Who's Afraid of the Big Bad Wolf reprint from Cor!!, hits the screen.  After the interval, the second cartoon starts and the bad news is that those blasted Warner Brothers cartoon strips have survived the revamp.  This week it's flippin' Tweety and Sylvester again.

The post-cinema conclusion to Saturday occupies the back cover, and includes a new feature within the page - a puzzle introduced by one of Cheeky's pals.  It's presented by Herman, and apparently he got it from The Traffic Warden's Bumper Fun Book. 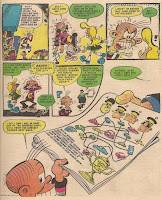 All of the Mystery Comic features with the exception of Mustapha Million are new this week, as is the Cheeky's Pal Puzzle idea on the back cover.  The Who's Afraid of the Big Bad Wolf feature makes its second and final Cheeky Weekly appearance.

There are no debuts or departures among the Cheeky's Week cast in this issue.  As always seems to be the case with special issues (for which we're all grateful), all the Cheeky's Week art this week is pure Frank McDiarmid.  I don't include Cheeky's appearance on page 6 (which is a Barrie Appleby rendition of the toothy funster) as a Cheeky's Week feature.

In the table below, the identifier 'Mystery Comic' after a feature indicates that it appears as part of The Mystery Comic.