Why, Dad, Why? clocked up 52 appearances in Cheeky Weekly, and survived until the final issue.

The title of Why, Dad, Why? explains all - infuriatingly inquisitive son asks long-suffering father a question and comic chaos ensues, often involving dad in a painful mishap.  Neither father nor son was named in the strip. The story would often end with Dad pursuing Son, intent on violent retribution. 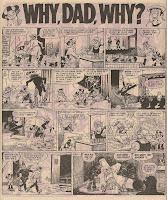 WDW was a rehash of a strip that had earlier appeared in IPC stablemate, Whizzer and Chips.  In the same way that Cheeky Weekly's James Bold feature re-used old Maxwell Hawke scripts from Buster, but with new artwork, Why, Dad, Why? used scripts from the earlier version of WDW, but redrawn by John K. Geering.  The original series was illustrated by Manny Curtis. Bruce has put up an example of the original WDW from Whizzer and Chips on his Comic Archive (UPDATE - that link is now dead so I have included Bruce's scan below).  I thought it might be interesting to compare that original strip with how it was re-interpreted in Cheeky Weekly dated 01 September 1979, just over 8 years after the original version appeared...

John Geering totally restyled Dad and Son, who had appeared rather nondescript in the original strips.  In the new version, Son sported rather striking headgear.

The Mystery Comic spanned pages 13 to 20 of Cheeky Weekly, and WDW was most frequently to be found on page 14, but in the 12 May 1979 issue, Dad and Son made it onto The Mystery Comic's cover.  When the Mystery Comic idea was dropped, the characters who had previously been confined within the centre section were freed to roam the comic, and WDW was then most often to be found on pages 21 or 27 (appearing 7 times on each).  The final issue of Cheeky Weekly, dated 02 February 1980, saw Why, Dad, Why? appear on page 3, the closest it ever got to the front of the comic (although Dad and Son did appear on the cover of the 11 November 1978 issue, promoting their strip inside).

The scripts were above average in terms of ingenuity and humorous content, so it's easy to see why the editor chose to re-use them.  John Geering's artwork certainly brought out all the amusement potential, with poor Dad's physical (and mental) torments depicted in wince-making detail.

In the final panel of the story dated 24 February 1979 we learn that The Two Ronnies are Son's favourite stars.

All the WDW strips were single-pagers, of which 6 were in full colour. 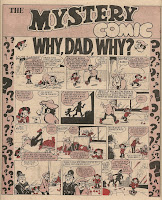 Dad gleefully contemplates administering a mallet to Son's cranium on the Pin-Up Pal poster in the 10 March 1979 issue.

Comparison of original Why, Dad, Why? in Whizzer and Chips, and the re-drawn versions in the Cheeky titles.

UPDATE 10 January 2012: In the table below, Why, Dad, Why's appearances in The Mystery Comic are counted separately where indicated in the Feature column.

Email ThisBlogThis!Share to TwitterShare to FacebookShare to Pinterest
Labels: Feature Summary, Why Dad Why?