Forgive me for doing two consecutive Features posts, but I have been struck by the realisation that, like 6 Million Dollar Gran, Paddywack appears to straddle the reality boundary of Cheeky's universe.  Initially Paddywack appears as, from Cheeky's perspective, a fictional character drawn by Doodle Doug.  However in the 02 September 1978 issue, Paddywack is seen in the Krazy Town cinema talking to Cheeky.

Before trying to make sense of Paddywack's ambiguous relationship with Cheeky's world, let's look at the history of the feature. 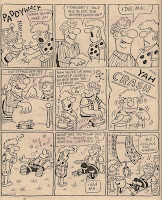 Junior artist and Cheeky's pal Doodle Doug returned to the pages of Cheeky Weekly in the issue dated 08 July 1978, having been absent since the 14 January 1978 comic.  In his initial run of appearances, Doug's function was to draw a single-row gag strip each week.  These strips didn't feature any recurring characters or situations.  However, on his return on 08 July 1978, Doug tells Cheeky "I've got a whole page for you to look at!  I've called it Paddywack!", and the ensuing page does indeed focus on Paddywack, and includes 2 gags.  From that issue, all the strips 'drawn by Doug' focused on Paddywack.

The following week's Paddywack page featured 3 gags, and included a caption inviting readers to send in any "Paddy Wack-type jokes".  In another of the inconsistencies that featured in the comic, the panel refers to Paddy Wack, while Doodle Doug and the feature's title referred to the character as Paddywack.

The first Paddywack page to feature jokes submitted by readers was in the 12 August 1978 issue.  Two gags featured on the page, one sent in by Paul Scarfe of Leeds, and the other by an unknown reader.  A caption asked the mystery joke donor to "send us your name and address, pal - we'll recognise your handwriting!"

The 16 September 1978 Paddywack page established what was to become the tradition of 3 gags on a page, which was to remain the norm for the rest of the feature's run (excepting those occasions where the feature was reduced to less than a whole page).  On 30 September 1978 the original title panel, which had appeared across the top of the first frame, was replaced by a title that ran across the top of the page and featured a reversed letter K, together with Paddywack's face at the right hand side.  This same issue introduced the black background for the strip which was to remain for all subsequent full-page Paddywack features. 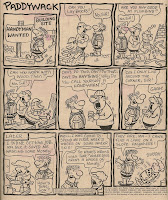 We have to acknowledge that there was an undertone of national stereotyping in the case of Paddywack (the character identified himself as Irish on a single occasion - in the 15 September 1979 issue), although the comic publishers wisely asked the readers to send in "Paddywack-type jokes" rather than identifying a particular nationality.  This was not the only case of questionable humour appearing in Cheeky Weekly - the Joke-Box Jury feature regularly included jokes that would be regarded as inappropriate today, and a number of Cheeky's Pals exhibited traits that would not be acceptable in current mainstream comics.  Cheeky Weekly was being published in very different times from our own, and 'humour' of this nature was common in the media and pubs, workplaces and school playgrounds. 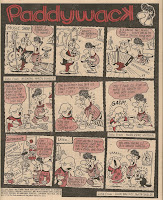 All the Paddywack strips were drawn by Jack Clayton, who had previously drawn the Home Movie feature in the comic.  Jack doesn't appear to have been as prolific across comics as some of his contemporaries such as Terry Bave, Tom Paterson and Mike Lacey, who each had strips in most if not all of the IPC humour titles of the period.  Indeed, the Home Movie strip's final appearance was in the issue dated 10 June 1978, a month before Paddywack started, so Jack never had more than one strip running in Cheeky Weekly at any time.  He had a very distinctive style which particularly suited the Paddywack gags, although in the early strips Jack was trying to make his artwork look a little primitive as it was supposed to be drawn by Doodle Doug.  As the strip progressed, Jack's usual style returned.

In 6 issues the Paddywack feature appeared across two pages, but the remainder of the strips were a single page, or less if space was at a premium.

With the introduction of Cheeky Weekly's 'new look' in the 07 July 1979 issue, Paddywack's strip moved to the rear of the comic and no further reference was made to Doodle Doug being the artist (although Doug continued to appear as one of the cast of Cheeky's Week).

Paddywack most regularly followed the Tuesday page (37 times), followed by 12 appearances following Friday, and 9 after Calculator Kid.  In terms of page numbers, the strip was highly mobile, appearing between pages 4 and 29.

The Paddywack feature appeared in 77 issues of Cheeky Weekly, missing only two issues in its run between 08 July 1978 and 26 January 1980 (the penultimate issue).  For some reason Paddywack, who survived the merge with Whoopee!, did not appear on the final two feature pages in the last issue of Cheeky Weekly, in which all the other characters who made the move into the new companion comic were shown meeting their Whoopee! pals.  It could be argued that this was due to Paddywack's status as a fictional character in relation to Cheeky's Week, but Gran, another fictional character from Cheeky's viewpoint, was included.

OK, so now let's address Paddywack's seemingly dual existence in Cheeky's world.  I can only assume that Paddywack was a real inhabitant of Krazy Town, on whom Doodle Doug based his strips.  Cheeky must have known that the subject of Doug's strips was in fact real, since the toothy funster was not surprised when he met Paddywack in the cinema. Cheeky certainly does react to Paddywack, but in my view his reaction is one of exasperation at Paddywack's comment (which was a common reaction of characters in the Paddywack strips), rather than surprise at coming face-to-face with what he had hitherto considered to be a fictional character. Paddywack made a further trans-dimensional hop to appear as one of the guests at Pete and Pauline Potts' party in the 6 Million Dollar Gran strip in Cheeky Weekly dated 06 October 1979.

It could be argued that Paddywack became a real inhabitant of Krazy Town when his link to Doodle Doug was severed as from the 07 July 1979 issue, but the meeting between Cheeky and Paddywack had occurred in the 02 September 1978 issue.