Although Doodle Doug appeared in 87 issues of Cheeky Weekly, his doodles graced only 10 issues.

Doug's purpose in the early issues of Cheeky Weekly was to draw a short gag strip that he would show to Cheeky on Tuesdays (with the exception of the final Doodle to appear, which was located on a Saturday page). The gag strips were, with 2 exceptions, 'silent', consisting of 2 or 3 panels, and had no recurring characters. A pair of thumbs could be seen holding each of the Doodles. The Doodles appeared halfway down the page, apart from the final Doodle, which appeared at the top of the page containing a continuation of the Saturday feature. Doug's artwork had no title, so for the purposes of identifying them I refer to them as Doug's Doodles. 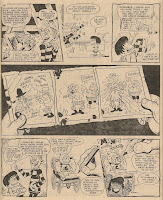 Doug's brief run of Doodles came to an end in Cheeky Weekly dated 14 January 1978, when the Doodle was relegated to page 24, having previously appeared on pages 12, 13 or 14.  Possibly going into hiding after this indignity, Doug seems to have disappeared from Krazy Town for 6 months, reappearing in the 08 July 1978 issue.  However, on his return, Doug had a new artwork project, Paddywack.

No further doodles were evident, unless one counts the following…


04 August 1979 - Doug appears with several oil paintings under his arm, which he subsequently uses as a tent, setting up a joke with the punchline "camping under canvas".

22 September 1979 - drawing of Burpo's empty pram (was intended to be a portrait of the belligerent babe, but Burpo wouldn't stay still). 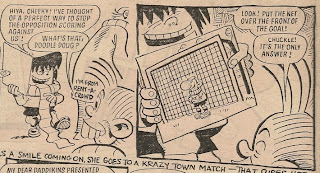 Personally, I don't think these qualify as Doodles, since they aren't multi-panel gags and the trademark thumbs of a true Doodle are missing.

Two 'real' artists drew the Doodles.  One, who provided art on 8 of the strips, was affecting the style of a young cartoonist, complete with ink smudges on occasion.  Thanks to Andy Boal for his comment on this post (where another Doodle can be viewed), confirming my feeling that these 8 Doodles were by Terry Bave. In the second part of his series, A Line In Chuckles, in the Summer 1986 issue of Golden Fun, Terry says that his first work in Cheeky Weekly was Calculator Kid, whose first appearance was on 01 July 1978.  I expect he just forgot these brief Doodle sketches.

The Doodles dated 17 December 1977 and 14 January 1978 were by Artie Jackson - thanks to stevezodiac and Lew Skinner on the Comics UK forum for identifying the artist.