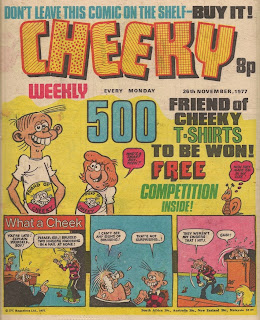 The cover of this issue leads with the Friend of Cheeky T-Shirt competition (did anyone reading this win one?), with the toothy funster looking rather odd as a result of not wearing his customary jersey. The What a Cheek strip is another 'Frank McDiarmid pencils' job, as are the rest of the Cheeky's Week strips in the comic, except the second part of Tuesday which is pure Frank.

Later on Tuesday, after Cheeky has read an old Dodger Caine page from Tiger, 1954, Frank McDiarmid is back on the inks (although I don't think the Doodle Doug illo is by Frank) and making reference to himself.

There's some superb Reg Parlett art on the Mustapha Million story. Reg is surely one of the best artists for depicting physical comedy. Love the fish and chip feed at the end as well. 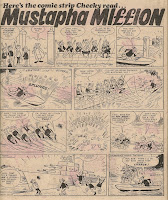 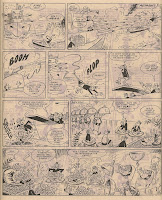 Burpo's cousins make their first appearance this issue, and Cheeky ends up being scared by a Creepy Sleepy Tale concerning the Loch Ness Monster's day trip to London.

A Henery Hawk strip represents the cartoon element of the Saturday morning pictures sequence for the first time. 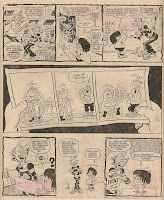 Page 31 announces that part one of the super Cheeky Diary 1978 will appear next week. This will replace the Skateboard booklet which concludes in this issue. The final page of the booklet to be printed appears on the back cover and features the Skateboard Squad, Cheeky and Snail. The art is by Peter Maddocks, who supplied all the art for the booklet. I know of his newspaper strips, of course, but is this the only work he did in comics? In his interview in Crikey 15 he doesn't mention any comics work. UPDATE 11 February 2011 - Of course Peter Maddocks drew The Family Ness strip in Beeb Magazine, as featured on Peter Gray's blog.