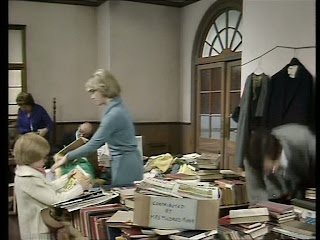 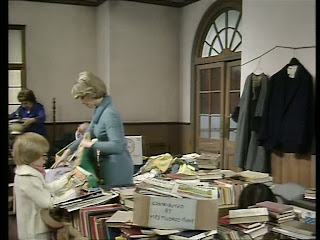 Jumble Pie, the first episode of the second series of the TV sitcom George and Mildred, was originally broadcast on 14 November 1977.  The plot involves George's 'artistic' magazines (with titles like 'Nudge', 'Wink' and 'Titter') being given by mistake to the Vicar's jumble sale. In the jumble sale sequence we see Tristram, the son of George and Mildred's neighbours, looking at a pile of comics.  On top of the pile is a copy of Cheeky Weekly dated 05 November 1977. While waiting to deliver his lines, Tristram (played by Nicholas Bond-Owen) can be seen trying to remove the badge from the cover of the comic (not sure if that was scripted or young Nicholas was just trying to snaffle the freebie).  He then asks his dad if he can buy them.

Luckily (or unluckily for Tristram, maybe) the young lad doesn't get hold of George's mucky reading material, which is in a box with gardening magazines on top.  Tristram's dad uncovers the stash of nudies and denounces it as filth, which should be banned.

Of course, in the final scene, the mags are found on top of Tristram's dad's wardrobe.
Posted by Niblet at 19:51

Email ThisBlogThis!Share to TwitterShare to FacebookShare to Pinterest
Labels: George and Mildred