The Other Cheeky Artists - Mike Lacey 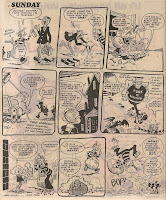 Mike Lacey was first pressed into service on Cheeky's pages in Cheeky Weekly issue 35, dated 17 June 1978.  Mike provided the art for all the Cheeky's Week features in that issue, with the exception of the continuation of the Wednesday strip at the end of that week's Creepy Sleepy Tale.  There was no What a Cheek strip as the cover was promoting the Skateboard competition and Fathers Day messages inside.

Mike was back with a full issue of Cheeky's Week features, apart from What a Cheek and the conclusion of Wednesday, in the 15 July 1978 issue. 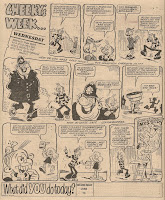 In June and July that year Mike provided one whole Cheeky's Week, together with a one-off page in another issue;

The pattern was maintained in early September 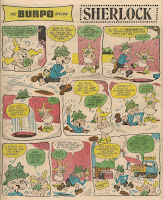 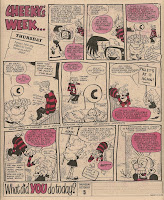 As well as drawing all these Cheeky pages, Mike was also delivering his regular strip in Cheeky Weekly, Disaster Des.

Email ThisBlogThis!Share to TwitterShare to FacebookShare to Pinterest
Labels: Mike Lacey, The other Cheeky artists