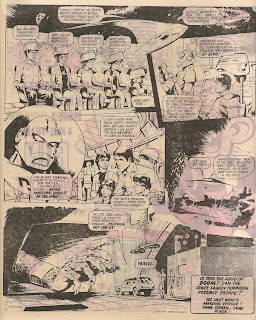 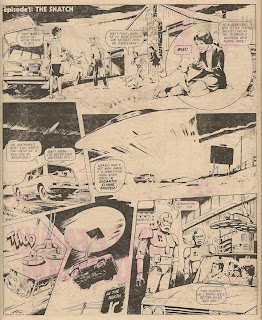 The Robinsons escape their abductors and in the ensuing weeks encounter a variety of alien fiends including Icemen, Fishmen, a giant two-headed cat and a race called the Moloks, who look like a human/evil hamster hybrid.

The most memorable alien is King Blubber who terrorises our heroes for several episodes until his inflatable body explodes to reveal a weedy occupant who disappears down an alien rabbit hole and is never seen again.

Just after the family construct a stockade, a mysterious cloud of dark particles approaches, only for the kids to realise that it's black snow (well, this is the Christmas issue).  Mum then reveals she has put up makeshift Christmas decorations in the encampment, and not only that, she has cooked a super Christmas dinner of alien veg. 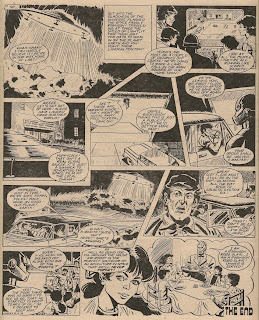 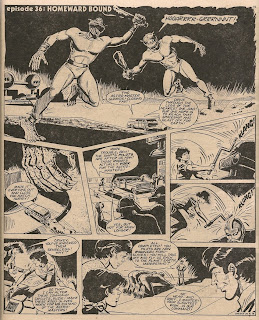 The Robinson saga proceeds at a breakneck pace with each episode featuring an escape from the peril presented in the preceding instalment, immediately followed by some new threat and cliff-hanger ending.  It's  something of a pot-boiler series that could have been kept going for as long as necessary.  So immersed in the plot was the writer that he/she failed to realise that three instalments were titled 'Escape' and two 'Tunnel of Terror'.

The strip was presented as the film serial that Cheeky and his pals watched on Saturdays.

As far as I can tell, there were three artists who drew the Robinson pages, none of whom I can name.  One artist provided all the artwork from the first installment up to and including the episode dated 25 March 1978.  The art on the episode dated 01 April 1978 was by the artist who drew 'Whiz Wheels' in Whizzer and Chips, and a third artist drew all the remaining episodes.  If anyone can name the artists, please contact me with the details.

UPDATE 15 July 2013 - Many thanks to Russ Juckes who has been in touch to let me know that the first artist on Space Family Robinson was John Richardson who, Russ informs me, also drew for 2000AD and Crash magazine.

UPDATE 22 November 2018  - Thanks to Lew Stringer's post I now know that John Richardson was also the artist on Cheeky Weekly's Mystery Boy which began 7 months after John's last work on Space Family Robinson (although MB was in fact a reprint of a strip that originally appeared in 1971).