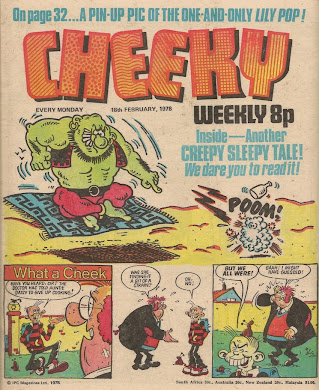 The banner across the top of this week's cover directs readers to the back page and the Pin-Up Pal feature, returning to the comic after a break of 14 weeks, with a poster of lovely Lily Pop. Below that, Creepy Sleepy Tale gets the front cover treatment, with, as we have come to expect, an image taken from a panel of this week's story, but cunningly reversed so that we won't notice! A red-haired, dandruff-free Teacher is Cheeky's straight man in this week's What A Cheek, during which the toothy funster turns yellow (due to a printing problem rather than the onset of jaundice, I presume), and another issue commences.

On Sunday Cheeky delivers Manhole Man's newspaper, and his subterranean stooge tells our hero to expect to see him throughout the week.

Skateboard Squad are involved in circus intrigue when the ringmaster contacts them with the news that the takings have been stolen.  A squeaky skateboard and the oft-used-in-comics 'elephants are afraid of mice' plot device soon reveals that the culprit is the elephant trainer. 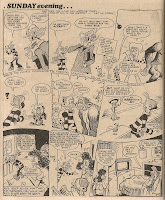 On Sunday evening, reader Robin Lewis provides a Vicar-type joke, and Petula introduces her latest pet, which looks strangely familiar.  Cheeky executes his devious plan to wangle a look at 6 Million Dollar Gran on TV, then watches an episode in which the robotic pensioner heads to South America to rescue some explorers who have fallen foul of the local tribe.

On Monday Bubblegum Boy bemoans his fate, and a caption on the Tuesday page leads us to wonder if his name really is Fred Holroyd. 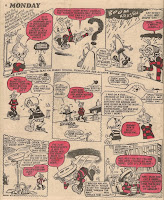 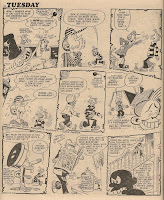 The cover-featured Creepy Sleepy Tale is of an evil genie on the rampage, and Cheeky disappears at the end of the story, not due to supernatural events, but because Mr McDiarmid forgot to stock up on artist's supplies. 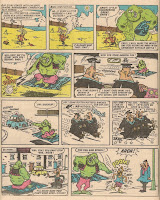 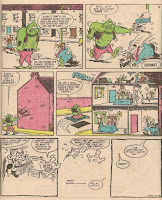 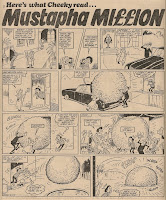 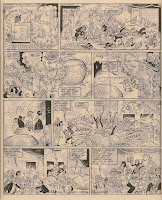 At the end of the issue, after admiring the Lily Pop poster, we check back through the pages and find that Manhole Man did indeed appear in all the Cheeky's Week elements this week, with the exception of the 3-panel conclusion to Saturday on page 30.  He even emerged in the cinema.

Frank McDiarmid is on top form in this issue, with some great art and amusingly daft captions in the 7 elements he delivers.

This is the third issue to feature one of Cheeky's pals throughout the week (Baker's Boy and Bump-Bump Bernie have previously been honoured in this way).  Like last week's issue, we have seen the week-spanning storyline maintained across 3 artist combinations.

The Road Runner feature makes its debut this week, and, if it's not a contradiction in terms, Cheeky's pal Hid Kid makes his first 'appearance' in this issue.