Bernie was an accident waiting to happen.  Unfortunately for him, the wait wasn't very long.  Often heralded by the sound after which he was named, Bernie would appear with bandages around various parts of his anatomy.  Cheeky would then ask his mangled mate how he sustained such damage, and Bernie's reply explained how a seemingly innocuous event had resulted in the injury on display.

The 15 July 1978 and 02 September 1978 issues presented the unusual sight of an un-bandaged Bernie.  On the former occasion Bernie subsequently fell down a manhole, but on the latter Bernie, trying to engineer an accident in order to miss school and crossing a black cat, spilling salt and walking under a ladder, remained unscathed.

In the comic dated 05 August 1978, Bernie's explanation of his accident was so animated that his flailing arms caused him to launch skyward. 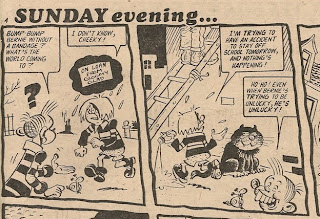 Bernie was afflicted by Cheeky Weekly's recurring inconsistent hair colour issue, being variously depicted with ginger, blonde and on one occasion black locks.  He featured in 2 Burpo Specials, but not as the headline character.  The first was with Manhole Man on 26 May 1979 (another example of a bandage-free Bernie), and the second featured Crystal Belle on 23 June 1979.

Bernie made it onto Cheeky Weekly's cover in 7 issues, each time in the Cheeky's Week feature.  He was also a guest in the Skateboard Squad strip on 24 June 1978.

Bernie was featured on the Pin-up Pal poster in the 29 July 1978 issue, where his hair colour was hidden by head-to-toe bandages.

Cheeky's bruised buddy made his debut in Krazy dated 30 October 1976, where readers learned he was the brother of Big Strong Sam\Steve. However he didn't return to the pages of that comic until the 18 February 1978 issue, thereafter making only 2 further Krazy appearances.