The extremely shy Hid Kid first didn't appear in the 18 February 1978 issue.  In fact, he didn't appear twice in that week's comic, first on Thursday and again during the cinema interval.  In total, Hid Kid failed to appear in 65 issues of Cheeky Weekly, with his last non-appearance occurring in the 26 January 1980 comic.


OK, you get the idea - Hid Kid's gimmick was that he never fully revealed himself, but hid somewhere in the panel while the other characters referred to him.  In the early part of his run, Hid Kid often lurked behind lamp-posts, but later he varied his hiding-places to include post-boxes, dustbins, trees and bushes.  Over the weeks we did get to see Hid Kid's arms, legs and hair.  In the issue dated 15 September 1979 we saw Hid Kid in one of Bump-Bump Bernie's old plaster casts. 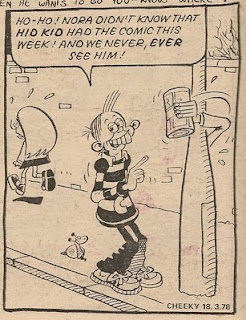 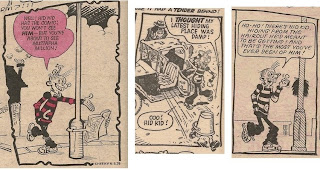 Hid Kid 'appeared' more than once in a number of issues, but the issue that really showcased the coy Kid was that dated 28 April 1979, which featured Cheeky's bashful buddy no less than 6 times, but he failed to appear on Friday.  Or at least no-one on the Friday page acknowledged he was there, though there was a caption in the panel as Lily Pop propelled Cheeky across the road, which said "Did you spot Hid Kid in this picture?  No? Neither did we!". 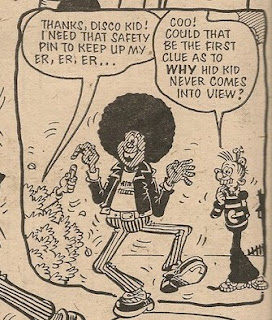 In the 14 July 1979 issue Cheeky speculates that Hid Kid's reticence to reveal himself may be due to a wardrobe malfunction.  This would seem a reasonable assumption, since in the Kid's earlier under-bucket appearance (see above), he appears to be deficient in the trouser area. 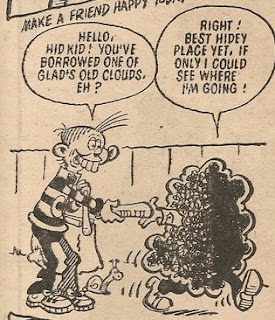 However, in the comic dated 28 July 1979 it is evident that Hid Kid, incontrovertibly fully trousered, still chooses to conceal himself.

A half-page announcement in 27 May 1978's comic invited readers to send in their drawings of Hid Kid.  The £2 prize-winning entries were published in the 05 August 1978 issue. 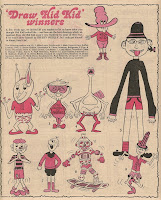 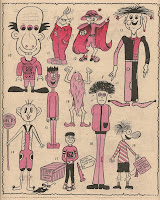 Hid Kid's name may have been a play on that of Krazy comic character Hit Kid.