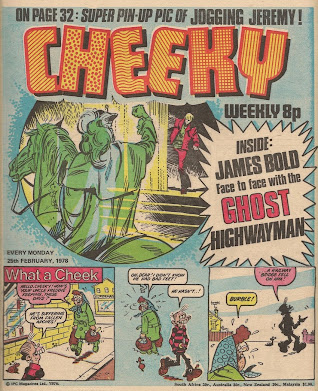 The Pin-Up Pal poster gets a plug on the top of the front page again this week, and the main part of the cover gives the current James Bold tale a boost with, as we might have guessed, artwork taken from a panel of this week's story.  The cover version of this panel is coloured in a rather fraudulent way, to give the impression of a transparent, spectral highwayman, but as we have seen in an earlier post, the final episode reveals that the 'ghost' is entirely human.  Of course, readers of Cheeky Weekly will only discover next week, when this Bold story reaches its conclusion, that their expectations have been cynically manipulated.  Cheeky's stooge for the What A Cheek strip this issue is a generic housewife rather than one of his pals.

There is something of a trend emerging in the comic, as this issue it's the turn of Louise to appear on all but Wednesday's Cheeky's Week pages, after vowing on Sunday, "I'll think of a way to make Cheeky kiss me, if it takes all week!"  She can be seen plotting furiously over the following days. 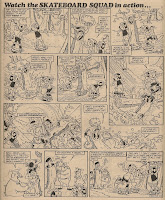 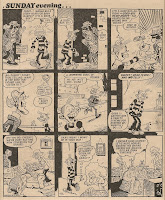 On Sunday evening, as Cheeky puts another plan into operation to watch 6 Million Dollar Gran, we note that Cheeky's mum has had her hair dyed since we saw her in the previous issue.

There's a close encounter of the Gran kind, as the robotic pensioner blasts off to confront the occupants of a UFO. 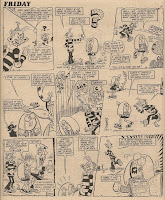 Cheeky wears a false beard as he enters the newsagents to read the cover-featured James Bold episode, but this disguise doesn't stop him from being ejected from the shop just as his reading reaches a peak of excitement, as usual.

On Friday, someone in the Cheeky Weekly office couldn't resist inserting a joke referencing playwright Harold Pinter (the lettering is different to that on the rest of the page).  This is the most highbrow joke to appear in the comic's run, so if you're expecting anything better than this, you're reading the wrong comic. 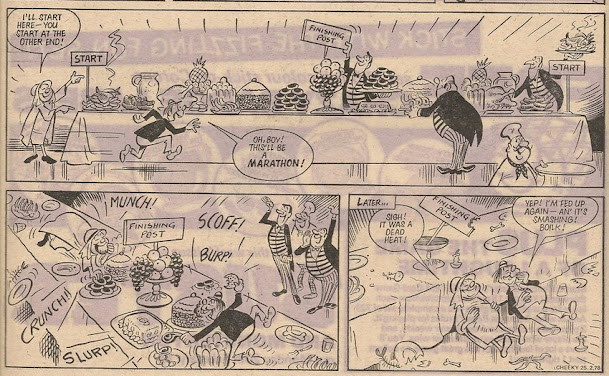 On page 24 there are 2 IPC ads - a plug for Misty number 4, and news of a free gift with Buster and Monster Fun; a set of Corona soft drink stickers featuring the 'every bubble's passed its fizzical' theme of the concurrent TV ad campaign.  I seem to remember that the stickers were also given free with every purchase of Corona drinks.

On page 31, Louise finally carries out her osculatory threat from Sunday, and kerzunks a smacker on the toothy funster, before the comic rounds off with the back page poster of feeble fitness fanatic Jogging Jeremy.