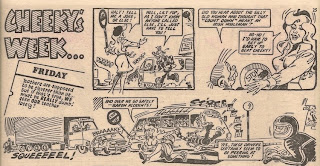 The gorgeous Lily Pop appeared in 113 issues of Cheeky Weekly.  She was employed as a school crossing supervisor (or 'lollipop lady', hence her name), but she was guaranteed to stop the traffic even without her 'lollipop'. 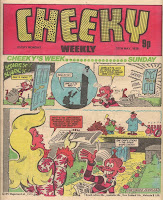 Drooled over by most of the adult male characters in Cheeky's Week (most notably Cheeky's Dad and Teacher), it was Lily's job to deliver Cheeky safely across the road to school, but first she would demand a joke from the toothy funster.  On receipt of one of Cheeky's corny gags, Lily would step into the road and cause the traffic to halt, seemingly unaware of the looks of longing on the faces of all the male motorists. 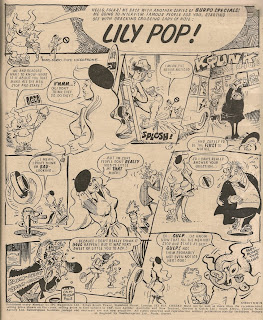 Fortunately, Lily was never affected by the Cheeky Weekly inconsistent hair colour problem, and remained resolutely blonde throughout her appearances. 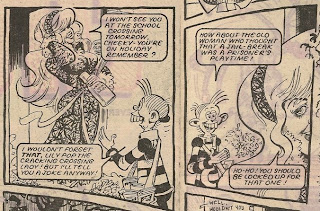 The cracking crossing lady was created for Cheeky Weekly, although after her debut she did appear in 2 issues of Krazy - 25 February and 15 April 1978.

No-one drew Lily like Frank McDiarmid, who brought out the full fwooarr factor whenever he depicted her.  Luckily for us, Frank was the most regular artist on Lily, drawing her in 66 elements.  All the art in the examples above is by Frank McDiarmid, except where noted otherwise.  For the breakdown of the other Lily elements by artist, see below.