This week's cover strip features portal punnery with the Knock-Knock Door, swiftly followed by larks with luscious Lily Pop as she takes delivery of her copy of The Sunday Stunner. And where exactly is Cheeky's gaze directed in the final panel? Certainly not at Lily's face (or her hand which for some reason has turned yellow).

6 Million Dollar Gran is this week engaged in a search for her bloomers which have blown away with the rest of the contents of her washing line. In a convoluted plot, the lost laundry is propelled through the Earth's crust and the synthetic senior citizen burrows down to locate her errant undies in Australia, allowing another outing for that oft-used British comic device; depicting life in Australia as being upside-down. Do Australian comics show Britain in the same inverted fashion?

On Wednesday Elephant and The Man InThe Plastic Mac make their only crossover into Cheeky's Week as the toothy funster's dad provides his grinning offspring with the latest copy of the Mystery Comic.

This week's issue of the Mystery Comic is the only one to feature Why, Dad, Why? on the cover. As Dad expounds on the subject of gravity we learn why the Antipodeans depicted in this week's 6 Million Dollar Gran episode didn't fall off the planet.

Usual Mystery Comic cover star Tub is entirely absent this week, and for the fourth time a Star Guest is occupying one of the pages of the perplexing publication. This time it's Uncle Rich and Willoughby of Super Store who are attempting to boost sales of Whizzer and Chips. As we return to the Cheeky Weekly section of the comic, an ad on page 21 informs us that readers of that very comic are this week enjoying a free sachet of milkshake mix as IPC's promotion reaches its penultimate fourth week. The toothy funster's comic will be the last title to carry a free packet of raspberry-flavoured powder next week.

As of Thursday, the artwork duties on Cheeky's Week are handed over from Frank McDiarmid to Mike Lacey. On that same page Cheeky introduces us to a new pal, Zoot Soot the chimney sweep. Zoot will go on to appear in a further 13 issues of Cheeky Weekly.

On the following page Jimmy Hansen draws his 76th and final episode of Skateboard Squad, although there is no indication in the strip that this is to be the last outing for the sensational skateboarders under this title. The intrepid trio will return as of the 26 May 1979 issue in their new guise of Speed Squad.

On Friday Cheeky gets another eyeful of cracking crossing lady Lily Pop, and it seems to be doing his peepers no good at all. Luscious Lily delays a vital consignment of IPC product as she transports the toothy funster across the carriageway.

Rainham reader Emily Jacob takes our toothy pal to task on the Cheeky Chit-Chat page regarding the What did YOU do today? diary section which has been appearing at the foot of each daily Cheeky's Week page since 30 September 1978's revamp issue. Ms Jacob isn't happy about removing said sections from her comic, which is a little odd as I'd never believed the diary was supposed to removed. Cheeky democratically solicits reader reaction to the idea of ceasing the diary. 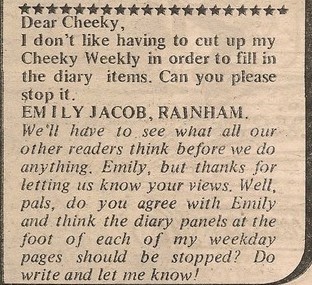 On Saturday we see a selection of Cheeky's pals struggling with the curious culinary concoctions on offer at Auntie Daisy's party. Fortunately there's a happy resolution.


The comic rounds off for the 6th consecutive week with a Burpo Special (this time focusing on Mechanic).

As mentioned above, the Cheeky's Week artwork duties in this issue are shared between Frank McDiarmid and Mike Lacey with, in a nice touch, the Auntie Daisy's party storyline being handed over between the two artists, each of whom contribute 5 elements of the toothy funster's week.

Email ThisBlogThis!Share to TwitterShare to FacebookShare to Pinterest
Labels: cheeky weekly issue summary, What did YOU do today?