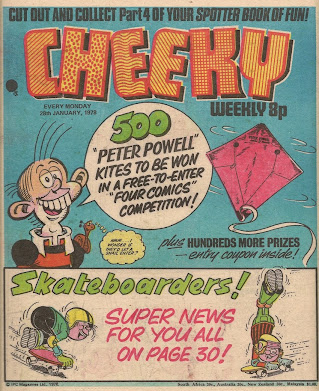 Flying Fred Holroyd, aka Bubblegum Boy, is back on the cover to see Cheeky announce a Four Comics competition.  What a Cheek is bumped from the cover by a teaser advising skateboarders that they will find super news on page 30.

On the second panel of the Sunday page, Cheeky sets Baker's Boy a riddle and allows him a whole week to provide the answer.  Those curious to learn the answer should look here.

Skateboard Squad have an unpleasant encounter with the terrible Thomson twins.  Is this a dig at IPC's rival comic publisher, DC Thomson?  Probably not.

There's some nice artwork from Ian Knox on this week's 6 Million Dollar Gran episode, which sees Gran retrieve a lost dog and foil a robbery (of course).

On page 11 is the cut-out coupon required to enter the Four Comics Competition, also running in Krazy, Whizzer and Chips and Whoopee!  Readers are invited to identify the two identical kites from the ten shown, then enter their choices on the coupon and get an adult to sign it to certify that it is the entrant's own, unaided work.  All that remains is to cut out and post the coupon for the chance to win one of 500 Peter Powell Stunt Kites ('stunt kite' is a phrase one has to be very careful with to avoid an unintentional spoonerism), 250 Peter Powell T-shirts, or one of 250 packs containing stickers and a year's membership of the Kite Club.  Readers can enter as many times as they like, so why not buy another of the Fabulous Four comics this week for an extra entry form?  The message is further enforced on page 30, which carries a half-page ad for what this time are referred to as the Funtastic Four Comics (the same titles again).  IPC are really battling to increase comic sales, and who can blame them?


Page 4 carries 2 in-house adverts, more evidence of the publishers' campaign to boost sales.  The first is for the debut issue of Misty, 'the fantastic new mystery paper for girls', which will be on sale on Monday January 30.  The free gift given away in the debut issue is a shimmering blue fish bracelet.  Not sure what connection there is between fish and the contents of the comic, but I don't think that's a prime consideration when editors are sourcing free gifts.  The other ad is for Shoot, which this week includes 2 more packets of stickers for your Football 78 Album.  These 2 ads demonstrate the multi-gender nature of Cheeky Weekly's target audience. 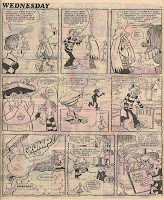 On the Wednesday page preceding the Creepy Sleepy Tale, Cheeky emerges from his house to find Krazy Town has had a fall of snow.  However, when Cheeky departs Burpo's house at the conclusion of the tale, no snow is in evidence.  By Thursday it's back, but gone again on Friday.  The artwork for Wednesday (main), Thursday and Friday is all by Frank McDiarmid Pencils 2, and one might have expected consistency within a single penciller/inker collaboration in a single issue.  I suspect, however, that on occasion, if they were short of artwork for a particular day of Cheeky's Week, the editor would substitute a page from the collection of unpublished pages they were holding for later issues. 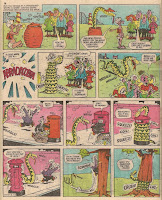 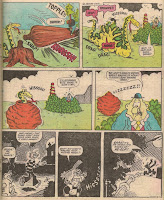 This week's Home Movie, Frankystein, features an irate milkman.  Again the editor/scriptwriter decided not to use a character from Cheeky's Week who may have fitted the bill (Milkie in  this case), instead featuring a generic pinta purveyor from the stock of cartoon extras.

Page 30 carries the super news for skateboarders - next week's Cheeky Weekly will be a special skateboarding issue, including a cut-out skateboard snap game.  Order it now!

The current cut-out feature, The Cheeky Spotter Book of Fun, reaches its concluding instalment this issue.  There are no character debuts or departures this week.  The Cheeky's Week artwork consists of 5 elements by Unknown Cheeky Artist 1, 4 by Frank McDiarmid Pencils and 1 by Frank McDiarmid.

This post updated 03 September 2020 to revise artwork attribution on 'Skateboarders! Super News' cover feature from Mike Lacey to Jimmy Hansen (and to add Spoonerism reference above).