I have changed the artist credit that I previously referred to as Frank McDiarmid pencils 2. I had originally thought the artwork in question was a combination of Frank's pencils with another artist doing the inking, but since doing the research while writing the profile of Flash Harry, I have begun to doubt that Frank had any input into this art.

This change of opinion hinges on the distinctive way this artist drew Flash Harry in the 04 March 1978 issue, in which Harry's appearance was unlike any other depiction of the character to appear in the comic's run. It seems to me that if this artwork was based on Frank's pencils, Harry's design in that issue would have been closer to the version that Frank drew when the funny photographer made his debut in the 31 December 1977 comic. It could be that at the time the unknown artist was assigned the work that eventually appeared in the 04 March 1978 comic, he/she had no visual reference for Harry, as the silly snapper had only appeared in two issues prior to 04 March 1978, so the artist just took his/her best guess at what the character looked like. This comic is the only one in which the artist that I'm referring to drew Flash Harry, although the artist contributed to 13 issues in total.


As I mentioned in my original post on this artist, he/she did include a number of distinctive components in the drawings, which is another reason to suppose that the work was entirely original, with no input from Frank - I doubt an inker would be given license to add to the pencilled pages.


Consequently, I have redesignated this artist as Unknown Cheeky Artist 1 (UCA1). 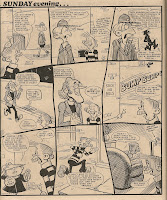 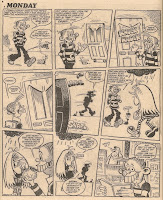 
Note as of 10 May 2012:  I believe that the artist credit Frank McDiarmid pencils is still valid, but I have struck out the reference to it above as I felt it was confusing.


However, in the process of preparing this blog I have looked through all the Cheeky art several times, and to me it seems that there is one inker who added some of his/her own touches when working on the Cheeky's Week pages he/she was assigned.  I have rather unimaginatively called this particular Frank-and-inker combination 'Frank McDiarmid pencils 2' (FMP2). 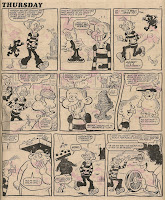 For a while, I wasn't sure whether this artwork was by Frank with an inker, but having looked at it over a period of time I see enough of Frank's work in it to satisfy myself that it's not entirely the work of another artist. I have some statistical evidence to support my theory that FMP2 is the work of Frank and an assistant, which I will discuss in my wrap-up post on the subject of the other Cheeky artists.  But then again maybe I'm completely wrong. 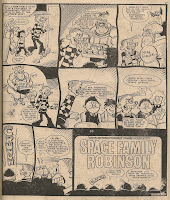 The trademarks which appear to be exclusive to FMP2 UCA1 are;

* A bird that eats the Baker's Boy's cakes, and sometimes perches on the edge of the panel, occasionally hanging upside-down.

* A punctured hot-air balloon which is propelled across the sky with attendant rude noises.

* Two references to saving Krazy comic.  Krazy was to come to an end 6 months into Cheeky Weekly's run, so maybe this inker artist was also doing work on Krazy.

* References to Cheeky putting sugar on his porridge. Scots famously put salt on theirs, so maybe this was a reference to Frank.

UCA1 was back in the following week's issue, but this time he/she contributed the Saturday page only. In the next issue, dated 28 January 1978, UCA1 was responsible for 5 pages.

After skipping a week, UCA1 was back in the 11 February 1978 issue with the cover's What a Cheek plus 4 pages, and the following week there were again 4 UCA1 pages, but no What a Cheek.  There was then another week's break before UCA1 was back with 5 pages in the 04 March 1978 issue.  The 11 March issue contained 5 pages of art, plus the cover's What A Cheek, by UCA1.

The next comic to feature UCA1 art was the issue dated 08 April 1978, which contained 4 of his/her pages.

After another week's gap, UCA1 contributed the 3-panel conclusion to Wednesday in the 22 April 1978 issue, and delivered the same element again on 29 April, and again in the 06 May 1978 comic, which was the last to feature UCA1 art.  Continuing my speculation that this artist had a link with Krazy comic, and the fact that Krazy's final issue was dated 15 April 1978, maybe it's significant that no further UCA1 art appeared in Cheeky Weekly after 06 May 1978. 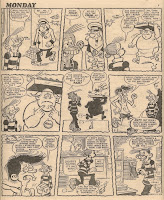