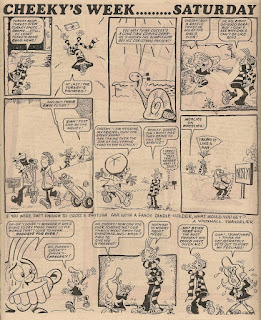 That concludes my investigations into Cheeky Weekly's lost 1978 issues. 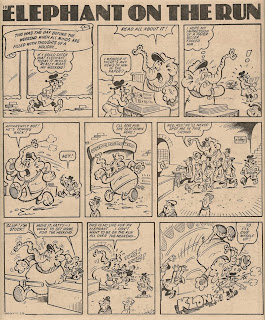 This leaves one last character from the complement of Mystery Comic fun-pals unaccounted for - Mustapha Million. I am not aware of any converted Christmas tales featuring Mustapha in Cheeky Weekly's run. Mustapha's sole appearance in the Cheeky Annual 1980 is on pages 6, 7 and 8. This is not a Christmas-themed story and appears to have been drawn to fill an annual-size page. The Mustapha strips in Cheeky Weekly were never more than 2 pages. Probably the 1979 Christmas story was the one intended for the 1978 Christmas issue - there's no way of telling for sure. 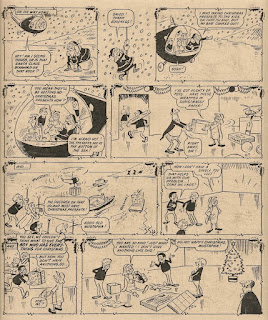 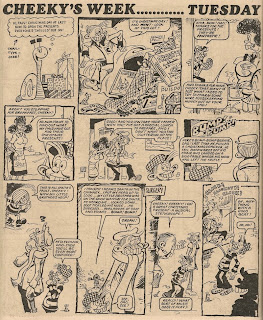 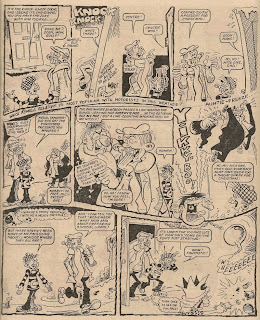 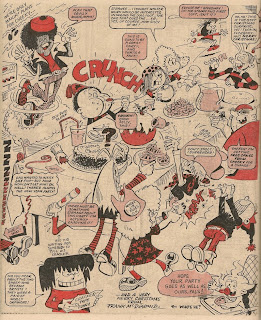 Moving on to identify the artwork that would have appeared in the 30 December 1978 issue of Cheeky Weekly (the Christmas issue) had publication not been interrupted due to a strike... 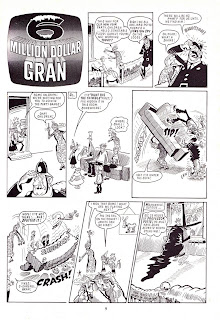 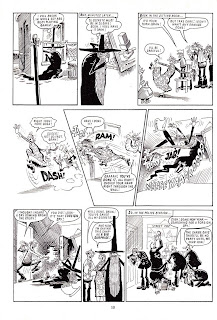 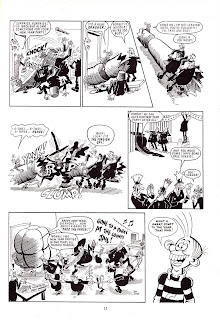 
That concludes my investigations into Cheeky Weekly's lost 23 December 1978 issue.

Paul from the excellent Cobwebbed Room blog has enquired about this ad which appeared in Cheeky Weekly dated 08 July 1978, so I thought I'd post it rather than describe it - you're welcome to use it on your blog, Paul, if it's one that you haven't already featured. 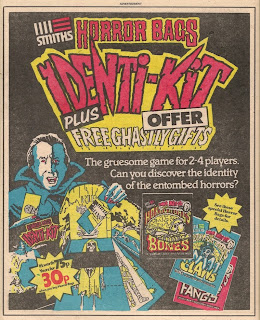 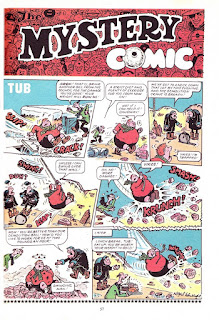 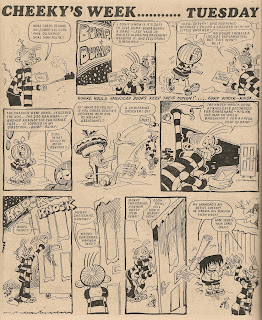 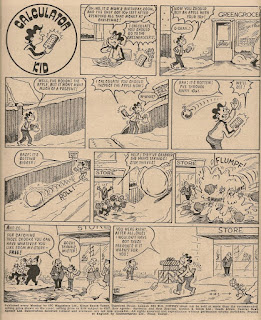 As discussed here, Cheeky Weekly failed to be published for 3 weeks in December 1978 due to an industrial dispute. The missing issues were those that would have been dated 16, 23 and 30 December 1978.

Material for Cheeky Weekly was clearly prepared some weeks in advance of the publication date, so it's a safe bet that the pages scheduled to appear in these lost issues had been delivered to the Cheeky Weekly editor before the industrial action brought publication to a temporary halt. Since two of the lost issues had a Christmas theme (there were two Christmas-themed Cheeky Weeklies in 1977; 24 December's pre-Christmas issue and 31 December's full-blown Christmas issue), these pages could not really be used (at least not without modification - of which more later) until the following festive season, and that is indeed what happened with the Cheeky's Week material.

From the 30 September 1978 issue to that dated 30 June 1979, the Cheeky's Week pages included an introductory title panel, and an area at the foot of some pages entitled 'What did YOU do today?' which gave readers the space to record a brief diary entry. Since a number of the Cheeky pages prepared for the Christmas 1978 issues included these elements, which would have to be removed in preparing the artwork for its eventual use at the end of 1979, it's possible to identify those pages which were salted away by a canny Cheeky Weekly editor for use in the following year's festive editions.

I'm embarking on a series of posts in which I will identify those pages that would have appeared in 1978's Christmas issues had Cheeky Weekly not become briefly embroiled in the volatile industrial relations of the late 70s.

By the end of 1978, the weary British public were well acquainted with the effects of industrial action. The 70s had seen governments attempting to control inflation (which had rocketed to a peak of 26.9% in 1975) by means of pay limits, a measure that was, of course, anathema to the trade unions. This confrontational scenario resulted in a series of strikes, power cuts, shortages of basic commodities and reduced working hours for many - even those not actually on strike.

As 1978 ground to its drear conclusion, Britain entered a particularly acute period of industrial strife, which came to be known as The Winter of Discontent. IPC, publishers of Cheeky Weekly, had already suffered the effects of industrial disputes earlier in the decade, and there were indications that trouble was again brewing when Cheeky Weeky dated 02 December 1978 was reduced from the usual 32 pages to 27. No reason for the page reduction was given in that issue, but most readers would have guessed that some sort of strike or work to rule was the cause. This thread on the Comics UK forum suggests that the majority of the disputes that affected IPC's output in the 70s were at the printers rather than at IPC itself.

The following week's issue was also truncated, although gaining an extra page on the previous week to make it only four pages shorter than normal.

Whatever the dispute that had caused the reduced issues, it must have worsened, as no Cheeky Weekly appeared for the following 3 weeks.

I don't remember where in London I was working at the time, but for a number of years I would visit newsagents near my various places of work during my lunch break on the day my comics of choice were published. I would then smuggle my purchases back into the office under my coat, as I didn't want my colleagues to know I was a comic reader. I don't recall asking the newsagent why there was no Cheeky Weekly during the period in question - I think I just assumed it hadn't appeared due to a strike or somesuch, but checked a couple of other newsagents, just to be sure.

We can be sure that no issues were published with cover dates 16, 23 and 30 December 1978 because the episode of Mystery Boy featured in the first issue after the break (dated 06 January 1979) continues directly from that in the 09 December 1978 issue in which Sandy was abducted by two German airmen. Also, there was a message across the top of page 2 of the 06 January 1979 issue (which was a full 32 pages) reading "Sorry we've been away - glad to be back for the new year, pals!"

It was particularly frustrating that one of the lost comics was what would have been the Christmas 1978 issue. However, I believe that most if not all of the material prepared for that issue was eventually used in one form or another - see these posts.
Posted by Niblet at 23:35 2 comments: