In Cheeky Weekly's 30 September 1978 issue, readers were invited, by way of a caption atop the first appearance of a new feature, to 'Meet a lad who's a walking disaster area!' The ambulatory accident instigator in question was one Disaster Des.

Des was a seemingly innocent young lad, who enjoyed ambling around his home town (the ominously-named Doomsville), humming his trademark 'Doody Doom', or a variation thereof, as he went. Our hero (if one with Des' destructive influence can be described as such) seemed oblivious to the fact that he possessed a disaster-inducing power that spelled calamity for those in his vicinity. Panic would erupt among the rest of the populace whenever the juvenile jinx, helpfully wearing a jumper with a large D on the front, slouched into view. Seldom did Des acknowledge the misfortunes that occurred around him.


For the benefit of readers who may have been a bit slow to appreciate the premise of this new feature, the second strip commenced with a variation on the caption above the first episode, this time reading 'This lad makes things go wrong…without doing anything!'.

In Des' ninth outing, dated 02 December 1978, the desperate shopkeepers of Doomsville devised a plan to prevent further damage to their premises in the High Street - they clubbed together and raised the funds to send Des on a world cruise. Their plan suffered an inauspicious start as Des' presence on the cruise ship caused it to flatten the shops after being propelled inland on a tide of soap suds. At the commencement of the following week's strip, the patched-up cruise ship somehow made it across the Channel and thus began Des' world tour. During his globetrotting in this and the following 4 issues, Des' catastrophic influence rendered the Eiffel Tower into a pile of scrap metal, drained the Suez Canal, flooded the pyramids at Giza and toppled the Statue of Liberty. 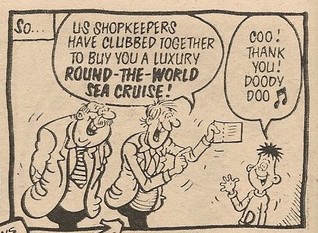 The 03 February 1979 episode opened with Des, now back in the UK, heading home by bus. Meanwhile, the desperate citizens of Doomsville, frantic at the news that Des had returned, were attempting to seal off their town by using mechanical excavators to pile snow onto all approach roads. As Des alighted from the bus, which had been halted by one of the snowy mounds, the driver of a passing experimental snow plough, unaware of the townsfolk's plan, attempted to clear the way into town. Needless to say, the snow plough went out of control and demolished Doomsville High Street again.

Many of the stories showed concerned citizens trying to lure Des away from buildings or events in Doomsville, but in this episode from 07 July 1979 we see the people of Mudhole-On-Sea have a different plan.


Des' strip in the 15 September 1979 comic opens with a Drainsylvanian visitor to Doomsville telling the Mayor that in his country they use doomwort, a smelly weed native to the swamps of Drainsylvania, to ward off disaster-bringers like Des. The Mayor despatches a team to the soggy source of the pongy vegetation, and they return with a 15-ton harvest of the reeking stuff. The Mayor orders that the town should be liberally covered in doomwort, and all are delighted when they see the approaching Des being repelled by the stink. However, concern mounts when a swarm of insects descends on Doomsville. The visitor informs the Mayor that the buzzing mass, now proceeding to chomp its way through town, consists of Giant Hairy Drainsylvanian Termites…


Des was kidnapped by agents working on behalf of a foreign power intent on harnessing the juvenile jinx's destructive influence for nefarious ends in the 06 October 1979 tale. Of course the plan backfired as Des' presence on their military base resulted in the annihilation of the nation's stockpile of weapons. The only serviceable piece of equipment remaining was a helicopter, which barely lasted the journey as the agents desperately returned Des to Doomsville.


All Cheeky Weekly episodes of Disaster Des were single-pagers. The mayhem-making moocher appeared on pages 6 and 7 of the final issue of Cheeky Weekly, but each page contained a separate story. Possibly there was a spare Des tale that the editor wanted to use before Cheeky Weekly bit the dust. It looks as though a new first panel has been added to the second story in place of the title frame. In the first DD tale of the final issue, Doomsville's Mayor, who was a recurring character during the strip's run, sought to protect his prize marrow from Des' influence (but of course failed), and in the second yet another of the Mayor's plans backfires, resulting in Des' arrival at the grand ball.


The catastrophe-causing kid made his first appearance, as one of the strips in The Mystery Comic, in Cheeky Weekly dated 30 September 1978. His first 30 strips appeared within The Mystery Comic's pages (on 2 occasions - 13 January and 20 January 1979 - making it to TMC's cover), but when the comic-within-a-comic idea was dropped as of Cheeky Weekly dated 07 July 1979, Des continued to appear for a further 28 issues. All the Disaster Des strips in Cheeky Weekly were drawn by Mike Lacey, with the exception of the 13 October 1979 episode which was by Jimmy Hansen.

In addition to his 2 appearances on the cover of The Mystery Comic, Des featured in Cheeky Weekly's main cover pic on 25 November 1978. Des was seen in the Tub episode dated 19 May 1979 and he appeared as one of the guests at Pete and Pauline Potts' party in the 6 Million Dollar Gran strip in Cheeky Weekly dated 06 October 1979.

Mooching casually through Doomsville, the adolescent accident architect was the subject of the Pin-Up Pal poster by Mike Lacey in Cheeky Weekly dated 20 January 1979 (which can be seen on Bruce's blog). A Disaster Des spot the difference puzzle, showing two versions of a pic of Des strolling through a building site, was printed in the comic dated 17 March 1979 in place of a DD strip in that issue.

The quality of the Disaster Des scripts was well above average and the daft premise gave Mike Lacey lots of scope to pack the panels with comedic incident as calamity befell the long-suffering folk of Doomsville. Des was definitely one of the Cheeky Weekly highlights.

Our pariah pal made 5 extra appearances during Cheeky Weekly's run - a ghosted strip in the 1979 Cheeky Summer Special, two Star Guest outings (Whoopee! dated 21 April 1979 and Whizzer and Chips 09 June 1979) and 2 stories drawn by Mike Lacey in the 1980 Cheeky Annual.

Des suffered his own disaster when Cheeky Weekly came to an end, as he didn't survive the merge with Whoopee! However, he did return in the Cheeky Holiday Special of 1980 and the Cheeky Summer Specials of 1981 and 1982. All these appearances in the post-Cheeky-Weekly Specials featured ghosted artwork and the strips were rather weak. Des also appeared in the Cheeky Annuals dated 1981 (1 strip by Mike Lacey), 1982 (in 2 sets, one of which featured a cataclysmic meeting between Des and Bump-Bump Bernie drawn by Barrie Appleby, and the other drawn by Mike Lacey), 1983 (2 sets, both ghosted), 1984 (2 sets by Mr Lacey) and the final Cheeky Annual, dated 1985 (2 ghosted Des stories). Sadly, Des was past his prime in most of these annual appearances.

Bruce has more info on the Cheeky Specials and Annuals.