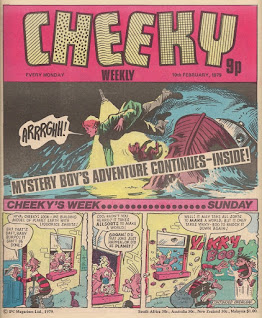 After last week's larger-than-normal-page-size issue, this week's comic reverts to its usual dimensions. Like the previous issue, the paper is of a marginally better quality than normal, with a slight sheen that's not usually evident.

Watery peril threatens Mystery Boy on Cheeky Weekly's front cover for a second time (see also 07 October 1978) and, as in his previous cover appearance, the artwork is lifted from a panel of the story inside. Cheeky and Baby Burpo share liquorice laughs in the Cheeky's Week…Sunday cover strip, before Yikky-Boo's customary exclamation brings the front page fun to a cacophonous conclusion.

For some reason the Sunday element on page 2 is missing the What did YOU do today? diary section that usually occupies the foot of the page. This is the first time Barrie Appleby has drawn an internal Cheeky's Week page since the 26 August 1978 issue and, as What did YOU do today? was introduced in the comic dated 30 September 1978, it may be that Barrie wasn't aware of the need to leave space for it. The presence of Cheeky's ugly mug at the bottom of the page meant WDYDT couldn't be shoehorned in. However, WDYDT is present where expected on all other Cheeky's Week pages this issue.


Joke-Box Jury enjoys a bumper 2-page spread, with the usual mix of old, bad and (from a 21st Century perspective) inappropriate material provided by readers who have won £2 for getting their funnies (and not-so-funnies) into print. The panel of judges seem untroubled by the dubious quality of some of the gags on offer.


Also anticipating a £2 boost to their pocket money are the 3 readers whose winning witticisms appear on Paddywack's page. The jokes here aren't offensive, but the Paddywack character clearly exhibits national stereotyping that wouldn't be acceptable today.

Jokes of this type, while shocking to our 21st century sensibilities, were common in the media and in the playgrounds and workplaces of Britain of the late 1970s.

The Tub story on the Mystery Comic's cover is the source of the main pic on Cheeky Weekly issue 64's front page that 2 weeks ago left readers confused as to its relevance. 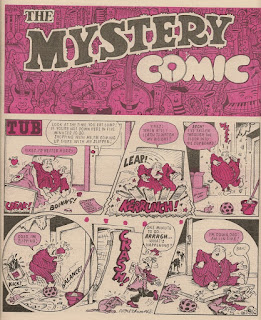 Reg Parlett and Joe McCaffrey continue to divide the artwork duties on Mustapha Million between themselves - this week Reg does the honours after a 4 week absence, providing the inks for what appears as a curious, partially-coloured strip. I suspect that the colouring was done this way as it was felt that to colour all the cards in the card shop would have overwhelmed the rest of the artwork. Maybe it would have been easier to colour this week's Elephant On The Run instead.

It's not just the readers of Cheeky Weekly who can provide bad jokes, as the final panel of Mustapha's story proves... 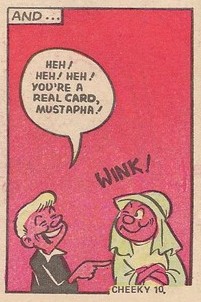 This week's Burpo Special focuses on dire dinner-lady Auntie Daisy's shortcomings in the culinary field. Burpo interviews diners as they emerge, reeling, from the school canteen. Even Yikky-Boo can only manage a feeble Yukky-Boo in reply.


After the Saturday elements bring Cheeky's Week to a close (with the toothy funster and pals biking around Krazy Town), the comic rounds off with another back-page Pin-Up Pal. This time the poster features Baker's Boy, in a rather basic rendition.