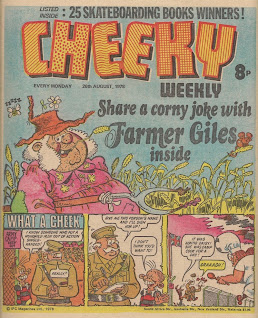 Risible rustic Farmer Giles dominates this week's cover, while Cheeky makes military mirth in the What a Cheek strip.

After last week's trip into the future we're firmly back in 1978 as Cheeky embarks on his usual Sunday paper round, meeting cover star Farmer Giles, a relative newcomer to the comic having made his debut on 08 July, along the way.  His presence on the cover may have led us to expect Farmer Giles to appear several times inside, but his Sunday appearance is his sole contribution to the internal pages. The Skateboard Squad are summoned by Lord Loot to attend to his dining arrangements in their adventure this week.  Why the butler can't serve the food remains unexplained.

As the toothy funster settles down to watch this week's episode of 6 Million Dollar Gran, he reflects that this is the last week of the summer holidays, so he'll have to resort to his wily schemes to stay up to watch Gran on TV next week.  In fact, there's an air of impending gloom at times in the comic, as several characters make reference to the imminent resumption of school.

As usual, there's great value from artist Ian Knox in this week's aerobatic Gran story.  I like the panel showing the synthetic senior citizen about to make her parachute jump via a plane's cabin door complete with letterbox and welcome mat. 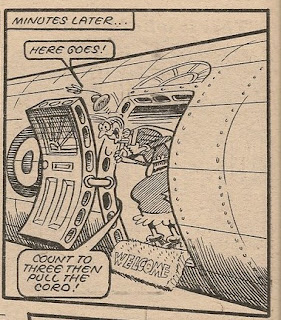 Ed McHenry draws the first Teacher's Teasers strip to appear in the comic.  I'd be tempted to describe this 2-page puzzle feature as a filler if it wasn't for the presence of Teacher and Cheeky.

The Old Comic feature also reaches the end of its run this issue, reprinting the most modern strip that has been featured, a Champ page from Whizzer and Chips, 1969.

Calculator Kid enjoys a full colour page, as did Cheeky and pals on the Monday feature on page 9.  These strips are in colour because for some reason this week's Creepy Sleepy Tale, although in its usual centre pages slot, is in black and white*.

Having said that Cheeky is firmly back in 1978 for this issue, on Saturday the toothy funster is whisked forward to the year 2001 (for a single panel) by the time-travelling phone box. 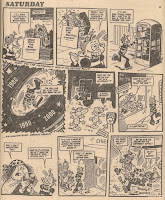 Petula taking her pet tiger to Krazy Town cat show is the subject of this week's Pin-Up Pal poster on the back cover.

There's a running joke in this issue's Cheeky's Week strips about a learner driver causing chaos in Krazy Town.

Mike Lacey delivers his final Sunday artwork this week.  Mike is in fact the provider of 10 Cheeky's Week elements this issue, with Barrie Appleby providing the art for the final Wednesday conclusion strip.  Frank McDiarmid gives us his What A Cheek on the cover, plus the main cover pic of Farmer Giles, and the Pin-Up Pal poster.

* In IPC comics of this period, colour pages were always printed side by side on a sheet which was then folded in 2 to make 4 pages for insertion into the comic.  Cheeky Weekly was limited to 4 colour feature pages per issue, presumably for reasons of cost, so colour would usually appear on the front and back covers, and across the centre pages.  However, if the decision was taken to print the centre pages in black and white, colour features would appear on pages 9 and 24, which were adjacent on the same 4-page sheet.