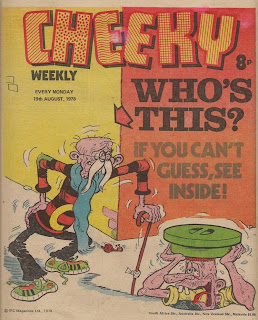 Following on from the teaser at the end of last week's issue, this week's cover has been cleared of clutter to give prospective readers a look at a familiarly-attired old gent, his geriatric manhole-dwelling companion and a septuagenarian snail.

It becomes clear on page 2 that this is to be a high-concept issue, as Cheeky gets a glimpse into his life in 2038, courtesy of crazy clairvoyant, Crystal Belle.  One of the surprises on this page is the sight of Bubblegum Boy (now Bubblegum OAP?), still floating above the streets of Krazy Town.

After a glimpse of 2038's Jetboard Squad in the final panel of Sunday's page, it's a bit disappointing to find that on the following page is a story of their grandparents, the Skateboard Squad, set in 1978. 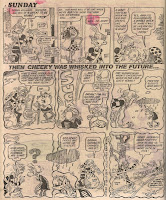 On Sunday evening, the elderly toothy funster is delighted to find that a 1978 repeat of 6 Million Dollar Gran is on TV.  Fortunately for us readers, the repeat must feature the episode that we would have witnessed anyway had this issue not leapt 60 years into the future, as it's one we haven't read before, in which Gran tackles a volcanic eruption.  Unfortunately, there's a continuity error at the end of the Gran strip - in the final panel a youthful toothy funster is seen in front of the TV set as a 'The End' caption appears, not the aged version who started viewing the episode in the final panel of the Sunday evening page.

Doodle Doug, now grey-haired, delivers the Paddywack strip as usual, and the intellectually-challenged subject of his strip doesn't look a day older than when Doug drew him 60 years earlier, but of course comic characters seldom age, the Cheeky's Week strips in this issue being a notable exception..

Cheeky meets the adult Burpo on Wednesday, and has to read a Creepy Sleepy Tale to a new generation of Burpos.  There's another continuity error in the conclusion to Wednesday, which features a youthful Cheeky again. 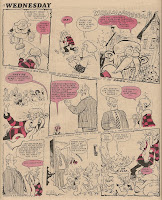 On Thursday, Cheeky visits Krazy Town library to peruse their bound editions of the Mystery Comic, from which he selects the Mustapha Million story which appeared in the issue dated 19 August 1978.  As Creepy Sleepy Tale had been shifted forward in the comic, and consequently was in black and white, Mustapha Million benefits from being in the full-colour centre-page slot.

The What's New, Kids feature on page 19 is firmly set in 1978, as a youthful Cheeky and not-so-youthful Granny Gumdrop tell us about various items of merchandise hoping to attract the attention of kids from the late 70s.

On Friday, the elderly Cheeky meets an equally aged Charlie Counter, who has of course brought Calculator with him.  Calculator, looking not a day older than he did in 1978, calculates what he and Charlie were doing 60 years earlier to present the Calculator Kid strip on page 21.

There's a double-page Joke-Box Jury on pages 22 and 23, and sitting in judgement of the readers' jokes are youthful versions of Cheeky's pals, so it's not set in 2038. 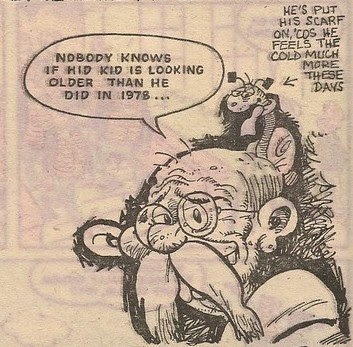 Cheeky attends the pensioners' film show on Saturday.  60 years into the future, they're still showing those rotten Tweety and Sylvester cartoons, but luckily for us regular readers, the main feature is the second episode of the Archie's Angels series we started reading in last week's issue.  What are the chances of that happening?

Crystal Belle brings Cheeky back to 1978 in the 3-panel conclusion to Saturday, and this issue rounds off with a back-cover Pin-Up Pal poster of Herman the traffic warden.

This is a great issue with lots of fun to be had as we encounter senior-citizen versions of many of Cheeky's pals (but sadly no Walter Wurx - I suppose poking fun at an elderly gent with bladder problems would have been a bit cruel).  Just to be exceptionally picky - it's a shame about the couple of continuity errors.  I suppose the strips in question were prepared some time before the idea for this special issue was mooted.  Nevertheless, I always appreciate it when comic creators go to the trouble of doing something special like this, and this is one of the most memorable issues of Cheeky Weekly.

Thankfully, most of the Cheeky's Week art on this special issue is pure Frank McDiarmid.  Frank delivers 10 Cheeky's Week elements plus the cover and Pin-Up Pal poster, with Barrie Appleby delivering the Wednesday conclusion.

Having enjoyed this issue, we're left reflecting on one question - what did Cheeky do this week in 1978?  We'll never know.