The Cheeky's Week strips are fondly remembered by Cheeky Weekly fans, but coming a close second in the memorability stakes for me are the James Bold stories.  These spooky tales provided a good counterpoint to the humorous antics of the toothy funster and his pals, so it's hard to understand the decision to axe the Bold series after the issue dated 05 August 1978.  Maybe it was felt that the eerie goings-on depicted in the Bold tales were either too male-oriented for a comic supposedly aimed at boys and girls, or just too scary for Cheeky Weekly's target audience of whichever gender.  Admittedly, this is unlikely to be the reason for the cessation of Bold's adventures, as the spooky goings-on would resume when The Terrible Trail to Taggart's Treasure began its 9-issue run in October 1978.  It seems to me that the most likely explanation is budget-related. As we have seen, the Bold scripts were re-hashes of old Maxwell Hawke stories from Buster in the 1960s, so IPC saved on writing costs, but they chose to reinterpret the scripts with new artwork, and therefore still had costs.  Archie's Angels, the strip which replaced Bold in the 12 August 1978 issue, was a straight reprint from Whizzer and Chips 6 years earlier, so no writing or artwork fees were due.

Archie's Angels was a strip in that grand British comics tradition of 'a bunch of kids sharing a mode of transport, around which adventures ensue', such as The Q-Bikes (Beano), Sammy Brewster's Ski-Board Squad (Buster), and of course Cheeky Weekly's own Skateboard Squad.  Archie's Angels did stretch credulity somewhat, in that their chosen mode of transport was a set of antique miniature biplanes, and their parents seemed unconcerned as the Angels flew off into perilous situations. 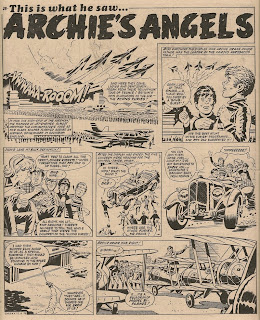 The team consisted of Archie Drake (leader, 'cos his dad bought the planes, and pilot of Angel One), Ginger (the ginger one, Angel Two), Scoffer (fat, Angel Three), Cyril North (brainy, spec-wearer, Angel Four), Jackie (girl, who made the team uniforms, Angel Five).

The first Archie's Angels episode was a 3-pager, but all subsequent instalments ran to 2 pages.

At the end of the introductory episode, we see that a train carrying circus animals is about to hit a car stranded on a level crossing.  The second episode commences with the resultant crash and consequent derailment.  On hearing of the disaster (in which no-one was hurt, but the animals broke out), Archie heads off to get the Angels airborne in order to capture the errant circus beasts. As he watches his son head off to the barn where the team's planes are housed, Archie's dad shouts a warning, "Be careful, lad! Those brutes aren't half-tame zoo animals…they're highly dangerous!"  I would have thought that uppermost in his mind would be the fact that his son and pals will soon be heading skyward without adult supervision. 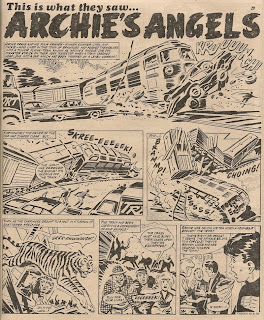 Archie activates the old air-raid siren attached to the barn roof, summoning the rest of the Angels.  After briefing them on their mission, the team takes to the air. 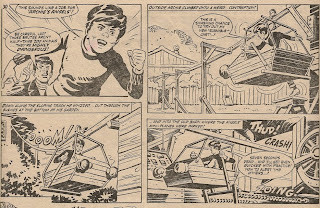 In episode 3 the Angels succeed in herding a vicious panther into a workmen's trench with some low-level flying, then set about rescuing a young lad who has been abducted by an enraged gorilla.  The fourth instalment sees Archie land in an orchard, alight from his aircraft, and pelt the ape with apples.  Distracted by this fruity onslaught, the gorilla drops the little boy and turns his attentions to the intrepid team leader.

In episode 5, just as it seems the gorilla has got Archie cornered, the rest of the Angels turn up and use their planes to force the gorilla into a nearby shed.

The air-aces then seek out the circus owner, who tells them that two Canadian bears are still unaccounted for.  Unknown to anyone, the bears are approaching the local old people's home.

In the denouement, the Angels take to the air with a net slung between the planes (these are kids flying, remember!) and drop it on the marauding grizzlies.  Expressing his gratitude to the team for recovering his animals, the circus owner gives the Angels free tickets to the circus.  A bit stingy if you ask me, but the Angels seem to be enjoying themselves at the show in the final panel.

Archie and his team went on to have at least one more adventure during their original run in Whizzer and Chips, but the final episode to appear in Cheeky Weekly was in the 16 September 1978 issue, after a run of 6 weeks.

All the Angels episodes were drawn by the mighty Ron Turner, who I associate more with sci-fi hardware than old aeroplanes, but as ever Ron does a sterling job, with dynamic work on the train crash.

The first Angels instalment in Cheeky Weekly commenced with a banner above the title reading "This is what he saw" to tie the strip in with Cheeky's cinema visit on the preceding Interval page.  The caption changed slightly the following week, to read "This is what they saw".  None of the following episodes had captions, but the 'story so far' summary which appeared above the strip title when originally published was removed for the reprints.  Presumably it was intended that the recap would be included in the Interval feature, as it had been while the James Bold series was running.  However, the only Interval to have a story so far summary during the run of Archie's Angels was that in the 26 August 1978 issue.  In the Interval in the comic dated 09 September 1978, it seems space was left in a speech balloon for a recap to be included, but the space is blank.