Jimmy appeared only in the 18 February 1978 issue.  He was given a rather distinctive look, wearing a strange flat cap and glasses, so he has the appearance of a character who would return.  Sadly for Jim, however, no further work came his way after his first encounter with Walter's limited bladder capacity.  Maybe someone in the Cheeky Weekly office envisaged a rich vein of water-divining -based humour, but the writer couldn't think of any more jokes on this topic, leaving Walter as the sole source of liquid laughs. 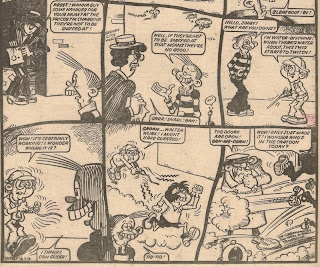