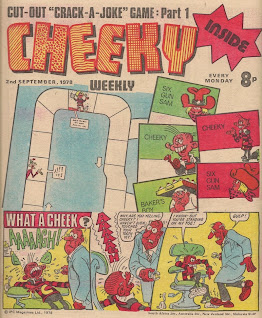 This week's cover leads with the Crack-A-Joke game that occupies 3 precious pages inside. I'm not a fan of these cut-out promotions that afflicted IPC comics of the period, I'd much prefer that the pages were put to better use with comic strips. IPC management obviously felt these schemes were effective in securing readers, as they appeared with annoying regularity.

Cheeky's in the dentist's chair awaiting an extraction in the What a Cheek strip, although the toothy funster's gnashers seem intact in the subsequent strips. Snail has gone pale with the stress of it all. 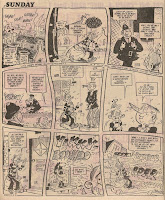 The mirthful mollusc is on the chimney pot in the first frame of the Sunday page (how did he get up there?), surveying the pall of gloom hovering above Krazy Town.  Yes, as was heralded last issue, this is the week in which school resumes after the summer hols.

The plucky trio of the Skateboard Squad are having no truck with school blues, intent as they are on a desperate race across town.  A wily journalist is on their trail, eager to bag an exclusive on the Squad's latest mission.  The newshound struggles to keep up with our heroes, crashing a bike in the process, then chasing them into an office block.  The exhausted journo enters the lobby just as the squad head into the lift and press the button for the 18th floor.  Missing the closing lift doors by inches, the press man races up the stairs.  Emerging utterly drained on the 18th floor, and anticipating a scoop of international proportions, the hack is just in time to see the Squad deliver Skipper and Skatie's dad's lunchtime sandwiches, which he forgot when he left for work.

There's more dental desperation in the 6 Million Dollar Gran strip, as Pauline Potts is suffering from toothache.  Some rather horrific scenes ensue as Gran ends up in the dentist's chair, with Ian Knox's grotesque style employed to great effect.

On page 8 is an IPC ad informing us that cut-out games are also appearing this week in Whizzer and Chips with Krazy, Mickey Mouse and Whoopee!  Additionally, competitions with £300 of Louis Marx toys as prizes will be appearing once in each of the comics mentioned over the next 4 weeks.  The competition will hit Cheeky Weekly dated 23 September.

On Monday, Cheeky is delighted to find that Teacher has lost the key to the school.

The Silly Snaps feature makes its debut on pages 12 and 13.  Consisting of 'amusing' photos supposedly taken by Krazy Town's resident photographer, Flash Harry, (but no doubt really sourced from IPC's filing cabinet of dog-eared old photos) this is, as far as I'm concerned, a filler depriving us of another 2 pages of potential comic fun.

Further fillage is to be found on page 14, where a page of Teacher's Teasers (i.e. puzzles) lies in wait to disappoint those of us eagerly anticipating a resumption of comic fun.  No offence to artist Ed McHenry who provides some nice work, including Cheeky, Teacher and Louise .

Mercifully, the comic-strip capers resume in page 15's Wednesday strip, when the toothy funster encounters Spiv making his first foray into the used (very used in this case) car trade.  A note at the bottom of this page tells readers to "Keep pages 16, 17 and 32 in a safe place until we tell you what to do with them in a few weeks' time, pals!"  So, having wasted 3 valuable pages in this issue, readers can't even do anything with them yet!

Pages 16 and 17 contain the first part of the 'board' for the Crack-A-Joke game.

Page 18 is devoted to the advertising feature, What's New, Kids, but the comics resume on page 19 with the Thursday element of Cheeky's Week, followed by the usual 2-page Mustapha Million.

A temporary halt to the cartoon fun occurs on page 22, as the Joke-Box Jury are sitting in judgement.  I always enjoy readers' jokes pages, so no complaints from me, there.

From there on it's comics all the way until the back cover, which contains the first batch of question cards for the Crack-A-Joke game.

So this is a rather disappointing issue for lovers of comic strips, as a total of 6 pages are given over to either cut-out features or fillers.  A further page is also lost to an IPC in-house ad, but I accept such ads are necessary so I won't quibble about that.

Two characters make their Cheeky's Week debuts in this issue.  Ding-Dong Debbie makes the first of her 5 appearances, and Paddywack makes his sole appearance in a Cheeky's Week strip, though he has of course been appearing in his own strip since 08 July 1978.