The Teacher's Teasers puzzle feature was a filler that appeared in only 3 issues of Cheeky Weekly, spanning cover dates 26 August to 23 September 1978. The Old Comic and Creepy Sleepy Tale features had made their final appearances in the 26 August 1978 comic, and the Crack-A-Joke cut-out game ran from the 02 September 1978 comic to that dated 23 September 1978. It seems that Teacher's Teasers was used to fill some spaces in the comic pending the end of the Crack-A-Joke promotion and Cheeky Weekly's revamp in the 30 September 1978 issue, in which the full Mystery Comic moved in to the centre pages. 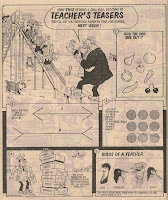 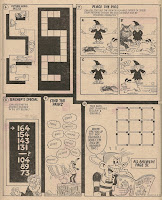 Although it was a filler, some effort was taken to tie the feature into Cheeky's Week.  In the first instalment, Teacher introduces the puzzles, saying "Welcome to Teacher's Teasers. They'll get you thinking in time for school next week!" thus picking up on the theme of the impending resumption of school after the summer holidays which runs through the Cheeky's Week strips in that issue. Also, Cheeky and several of his pals are depicted around the puzzles.

The first Teacher's Teasers was a 2-page feature, but the two subsequent appearances were single pages.  Teacher, Cheeky and Louise appeared in the second, and Teacher and Cheeky in the third and final TT page.

Ed McHenry did nice artwork on all 3 TT features.