According to the imdb, the first Star Wars film to hit planet Earth's cinema screens opened in the UK on 27 December 1977.  However, the film had premiered in the US the previous summer, so in the UK the hype had been building for some months.  Cheeky Weekly made a modest contribution to the growing hysteria, as a brief item about the imminent space blockbuster was included in the What's New, Kids feature that appeared in the issue dated 10 December 1977.

The next Star Wars reference in Cheeky Weekly came in the issue dated 11 March 1978, which included an ad for KP's crunchy, space-themed nibbles, Outer Spacers.  KP were running a promotion in which consumers of the salty space snacks could collect wrappers and send off for a kite emblazoned with a dogfight scene and the Star Wars logo.  Star Wars enthusiasts who were expecting their order to be transported across the space lanes to Tatooine or the ice-planet Hoth may have been disappointed to find that the destination for their postal order was in fact East Molesey. 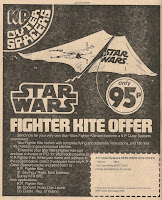 Luke Skywalker and his spacefaring chums (or at least miniature, plastic representations thereof) were featured on the What's New, Kids page in the issue dated 08 April 1978. 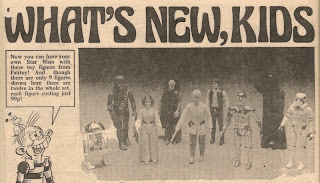 Krazy Town succumbed to the Star Wars phenomenon on the cover of Cheeky Weekly dated 13 May 1978, and in the same issue the KP Outer Spacers ad mentioned above got a second and final outing.

The fact that the toy being promoted on the What's New Kids page in the comic dated 20 May 1978 is called The Force Beam rather than The Light Sabre (or Saber) rather suggests it may have been an opportunistic, unlicensed addition to the toy shop shelves.  And a quick search reveals that was indeed the case.

Readers who had begun a collection of the Star Wars action figures advertised in previous issues may have been tempted to buy the to-scale land speeder or X wing fighter models promoted in What's New Kids dated 06 January 1979. 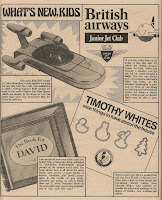 By spring 1979 it seems plans for the first Star Wars sequel were well under way, as model manufacturers Palitoy were running a competition to win trips to Elstree studio to see the film in production.  The artwork on this ad from 21 April appears to originate from the sure hand of Brian Bolland. 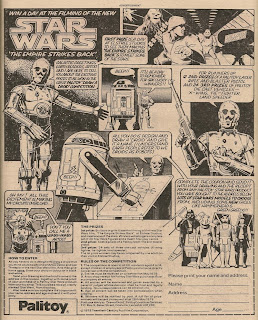 Brian Bolland was back doing the artwork in the next Star Wars ad, again aimed at collectors of the action figures and this time pushing the cantina, droid factory and Jawa models.  This full-page ad appeared in the 29 September and 27 October 1979 issues, with a half-page variant, promoting the T.I.E. fighter and again by Brian Bolland, appearing in the comic dated 24 November 1979, in a ploy to get the merchandising included on the Christmas lists of as many aspiring young Jedis as possible. 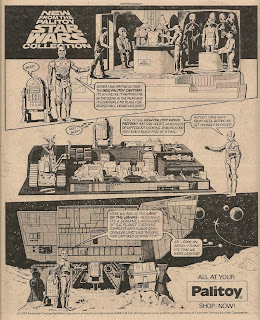 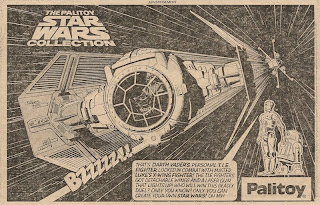 UPDATE 15 December 2011 - I found another Star Wars ad, that I missed originally due to my policy of not recording in my comics database any ads of less than half a page.  This one (about a third of a page) appeared in the issue dated  04 August 1979, and looks to be by Brian Bolland again... 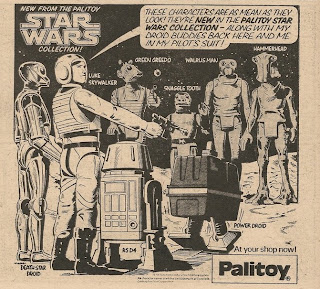