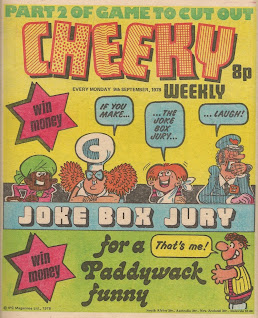 This week's cover abandons the What a Cheek strip in favour of plugs for reader participation features Joke-Box Jury and Paddywack, which can earn money for successful contributors.  The Crack-A-Joke game, now in its second week is also mentioned in the above-title banner, as a reminder for prospective comic purchasers, vacillating over the tempting piles of funny papers on their newsagents' counter, who remembered to keep their cut-out pages from the previous issue.  Parts 2, 3 or 4 of the game will be useless to readers who haven't got part 1.

There's evidence of a theme developing on the Sunday page, as Frank McDiarmid includes a couple of Smurf-related slogans in the background of a couple of panels - 'Smurfs Rool' and 'Smurfy Tyler-Moore', a reference to US actress Mary Tyler-Moore.

The Skateboard Squad are at a grand sports meeting and yes, it's time for that traditional British comic standby script to get yet another airing - the trophies are stolen, just as they were in the Squad's strips in the 06 May 1978, 20 May 1978 and 01 July 1978 issues.  This time, the terrific trio's deft use of the tug of war rope brings the fleeing felon to account.

There's more Smurfery on Sunday evening, as it appears Father Abraham is on the trail of his chirruping blue chums.

The same page also sees a bit of a row developing between Snail and Frank McDiarmid.  Good gag about the miners. 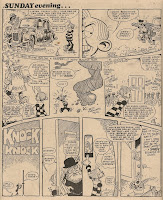 In this week's Six Million Dollar Gran strip we learn that the synthetic senior citizen is a member of Midwich Grannies Club, who are on a mystery tour by coach.  The coach, which is as venerable as the assorted granny passengers, soon breaks down.  Gran, determined to complete the mystery tour, tows the charabanc into the middle of an army artillery range. Is there a connection to John Wyndham in the story?

As Cheeky Weekly approaches its first anniversary, page 9 solicits feedback from readers.  This is one of the most detailed readers' polls I have seen, and there's not even a '5 entries drawn from a hat will win a £2 prize' incentive for readers to complete it.  It's interesting that Creepy Sleepy Tale is included in the list of features, when it ended 2 issues ago. This is actually the second time a readers' poll has been conducted - the first poll was printed way back in the 10 December 1977 issue, where it occupied a third of a page.  Let's hope the results of this poll mean we finally get shot of those flippin' Warner Brothers cartoon strips… 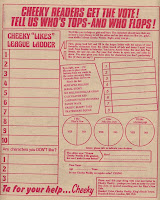 There's further mollusc/artist antagonism on the Tuesday page when Snail is amazed to see Cheeky leaning at a 45 degree angle with no visible support.  In the next panel Frank realises he forgot to draw the wall against which the toothy funster is lolling, prompting an outraged thought balloon from Snail, "Bah! That artist has got to go!"

On page 13 the reason for this issue's high level of Smurfage becomes apparent - a Super Smurfs Competition, of the 'spot the difference' variety, is featured.  Cheeky Weekly, National Benzole and Decca records pool their mighty resources to offer readers a chance to win vouchers to redeem for Smurf merchandising from National Benzole service stations.  As a bonus, all winners will receive a copy of a 'Smurfs hit' from Decca records.

The Joke-Box Jury is sitting in judgement on page 14, the same line-up of jurors as featured on the cover, except they've changed their seating arrangements.  All of them seem suitably amused by this week's batch of readers' funnies, so senders of all the jokes featured are assured of their £2 prizes.

I like Cheeky's encounter with Louise on Thursday.  Frank McDiarmid depicts a toothy funster boiling with rage.  Good acting, Cheeky, but we all know you fancy Louise really. 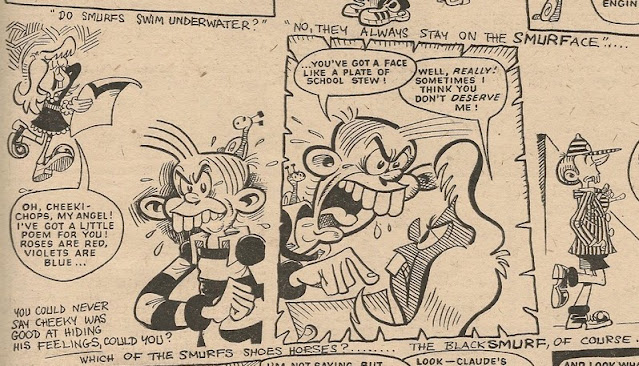 On page 31 is an announcement which all comic fans fear - no, not the 'Great news for all readers' which often heralded the end of the line for a title, but a note from Cheeky… 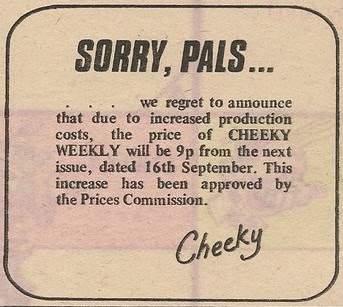 ...good to know that our toothy pal cleared the price hike officially.

We lose 3 pages of funnies to the Crack-A-Joke game for the second week, but on the plus side, this issue contains a glorious all-Frank McDiarmid Cheeky's Week, with added Smurfs.