Flash Harry's Silly Snaps was a feature consisting of photos, supposedly supplied by Krazy Town's resident photographer, Flash Harry, with funny (ahem) captions supplied by Cheeky. The feature appeared in 12 issues of Cheeky Weekly, its first occurrence being in the 02 September 1978 issue, and the final appearance coming in the 20 October 1979 comic. 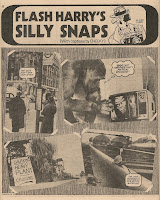 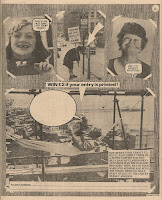 In each of its first 5 appearances, in addition to the captioned photos, a pic containing a blank speech balloon was printed, and readers were invited to send in their suggestions for an amusing caption.  The entries printed would each win a £2 prize.  Despite there being 5 caption competitions, the results of only 4 were printed.  The first competition results were printed in the comic dated 11 November 1978, and included a note saying "Look out for the September 9th contest winners soon!"  However, the next Silly Snaps results to be printed were those which appeared in the 20 January 1979 comic, giving the results of the competition set in 16 September 1978's issue.  Presumably the 09 September results were scheduled to appear in one of the issues which failed to be published as a result of industrial action during December 1978.  Wonder if any prizes were issued in respect of the 09 September competition?

The first 5 Silly Snaps features, which ran weekly from the issues dated 02 to 30 September 1978, all included a caption competition and spanned 2 pages.

The following 3 Silly Snaps features (11 November 1978, 20 and 27 January 1979) covered a half page each and consisted of successful caption competition entries and the related photo only. 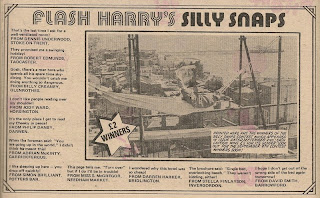 In the 03 February 1979 issue a single-page Silly Snaps feature appeared on page 11, and on page 21 in the same issue was a half-page feature giving the results of the final Silly Snaps caption competition that had been set in the 30 September 1978 comic.

Single-page Silly Snaps appeared in the 24 February, 03 March and 20 October 1979 issues, bringing to an end this feature's sporadic run.

Although some effort was made to make it relevant to Cheeky's Week, Silly Snaps falls firmly into the filler category.  Another filler, the short-lived Teacher's Teasers, emerged the week before the first Silly Snaps.  It seems that both features were intended to fill some vacant slots in the comic pending the end of the Crack-A-Joke game promotion and the revamp that occurred in the 30 September 1978 issue.  However, unlike Teacher's Teasers, Silly Snaps returned a few more times after the revamp.

Unfortunately the cheap paper and basic printing techniques used on IPC's comics of the time meant that reproduction of photos was very poor.  For the second Silly Snaps feature, an artist was employed to draw white outlines around the key objects in the photos, but this technique was never tried again.