Wednesday (conclusion) is the name I have given to this strip.  It was never given a name in Cheeky Weekly.

In 44 issues of Cheeky Weekly, the toothy funster had a regular Wednesday evening appointment to babysit Burpo.  Cheeky was highly reluctant to fulfil these duties because Burpo would lay in wait in his front garden with fiendish traps as Cheeky approached.  Reeling from the humiliation of being outsmarted by a toddler, Cheeky would attempt to restore his dignity by reading a terrifying bedtime story, in the form of a Creepy Sleepy Tale, to the belligerent baby.  The plan was to scare the terrible toddler so severely that Cheeky wouldn't be invited back.  The toothy funster's scheme backfired every time as Burpo thoroughly enjoyed the story, and it was Cheeky himself who was often scared witless, fleeing home in terror. 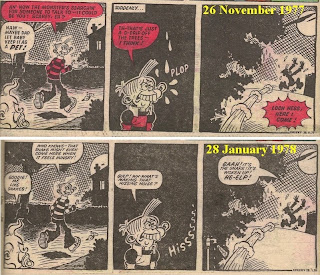 Wednesday (conclusion) was missing from a single issue in its run - the comic dated 04 Februarly 1978 was the special skateboard issue and in place of the Creepy Sleepy Tale, Cheeky and Burpo played a game of Skateboard Snap, which was the cut-out feature occupying that issue's centre pages.

The last appearance of pure Frank McDiarmid art on Wednesday (conclusion) was in the 24 June 1978 issue.  Presumably Frank was freed up to concentrate on full page Cheeky's Week features.

Wednesday (conclusion) was usually printed in black and white (with occasional spot colour) despite CST most regularly being in full colour.  I suppose the change back to black and white/spot colour denoted that Wednesday (conclusion) was set in Cheeky's universe.  Sometimes when CST was itself in black and white, a row of asterisks was used underneath the final row of CST panels to delineate the junction between the two features. In the 11 February 1978 issue, the strip was printed in red and white beneath a blue and white CST.