Paddywack, in appearing to occupy two levels of reality within the comic, qualifies to appear in a Feature post, and a Profile post.

For an explanation of the dual nature of Paddywack's relationship with Cheeky's universe, and a suggested resolution of this apparent dichotomy, see the Paddywack Feature post.

Paddywack appeared only once in Cheeky's Week, during the cinema interval in the issue dated 02 September 1978. 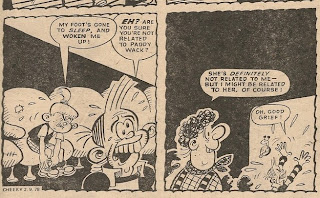 Paddywack made a further appearance outside of his own strip, when he was one of the guests at Pete and Pauline Potts' party in the 6 Million Dollar Gran story in Cheeky Weekly dated 06 October 1979.
Posted by Niblet at 19:18