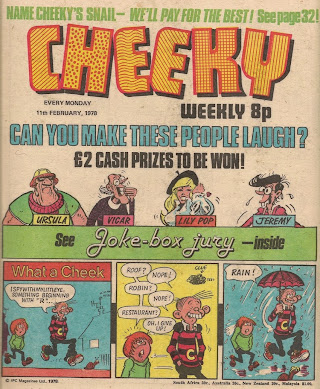 After last week's special issue we return to relative normality for issue number 17.  The banner across the top of the cover announces the Name the Snail reader participation feature, and the main part of the cover invites submissions for Joke-Box Jury with the chance to win £2.00.  The remainder of the cover is taken up by the What A Cheek feature, in which there are a couple of puzzling elements - why is the bird on the TV aerial in the first panel laughing, and where did Cheeky get that umbrella from?  Snail obviously keeps a rain hat in his shell.

On Sunday Cheeky meets Bump-Bump Bernie and decides to count how many accidents the hapless Bernie has during the week.  This is the catalogue of calamities that Bernie is subject to…

Cheeky then declares that Bernie has had 9 accidents, just before Bernie trips over the letter M.

There's an outbreak of graffiti in Krazy Town park this week.  Fortunately Skateboard Squad apprehend the culprit and put him to good use painting lines on the football pitch.  Who needs ASBOs when Skipper, Skatie and Wipeout are around?

On Sunday evening, Cheeky wangles a visit to his Aunt and Uncle's in order that he can watch 6 Million Dollar Gran.  No wonder Cheeky has such distinctive dentition - even the members of his family who aren't blood relatives have goofy teeth. 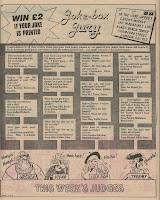 The Joke-Box Jury page, as featured on this week's front cover, includes a selection of £2.00 - winning funnies, not all of which would be considered appropriate today.  The joke-judging panel on the feature are the same as those shown on the cover, so well done to all concerned - I half expected the characters on the panel inside to be different. 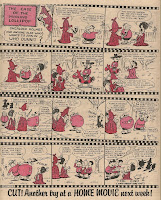 In Space Family Robinson, Suzie and Ben meet a memorable foe, King Blubber, who will be back in future episodes. 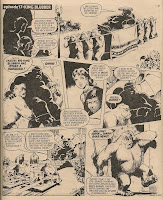 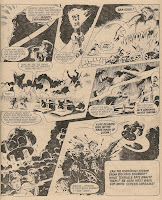 The back cover rounds off the issue with Snail demanding (rather rudely, in my opinion) "Oi! What Is My Name?".  Readers who send in the names that Snail likes best will win £2.00. Gary Gastropod?…Mickey Mollusc?…now where's my pen… 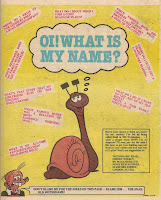 The Cheeky's Week art this issue is provided by Frank McDiarmid pencils (5 elements), Frank McDiarmid pencils 2 (a further 5 elements), and making his first contribution to Cheeky's Week, Jim Watson, who furnishes us with 3 elements.  It's interesting that the 'count Bernie's accidents' storyline is maintained across 3 different art sources, although I'm assuming that Frank McDiarmid provided the pencils for 5 of the elements.  I have in the past been rather dismissive about how the daily elements of Cheeky's Week were assembled, but this issue shows that some care was taken to have a consistent line running throughout the week, despite 3 different artist combinations being involved.