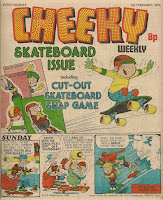 Having got Sunday out of the way, page 2 commences with the first of a 2-page Skateboard Squad story, in which they give a display at the new sports centre and, it goes without saying, foil a crime in the process.  Mike Lacey ties this tale into Cheeky's Week by placing the Vicar, Cheeky and 6 Million Dollar Gran among the spectators, although the decision to include Gran is a debatable one, since in Cheeky's universe Gran is a fictional character from a TV show.  Actually, this tale is not quite a full 2 pages, as there's a banner across the bottom of the second page directing readers to page 15 where they can find the instructions for the skateboard snap game.  Quite why they didn't just print the instructions at the bottom of page 3 rather than taking up valuable space with a pointless banner remains a mystery, but I suspect there is a bit of fillage going on in this issue. 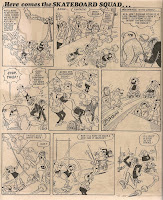 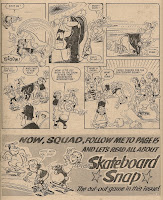 On Sunday evening, Cheeky sticks to his plan of only speaking to people on skateboards, meeting the Vicar, Manhole Man (who's actually underneath a skateboard, but evidently that's good enough for Cheeky), and providing boards for his Mum and Dad, but ignoring Louise, who is not on wheels.

For the first page-and-a-half of this week's 6 Million Dollar Gran story, it seems the skateboard theme is not going to intrude, but Gran eventually performs some boarding tricks on a trolley as she rescues a racing car driver.

This week's instalment of the James Bold tale, The Ghost Highwayman, doesn't include any skateboard references - I presume the editor felt that a ghost on a skateboard wouldn't be appropriate.  There are no skateboards or related items featured on the What's New, Kids page, either, nor are any to be found on the Old Comic page.

There is no Tuesday feature in this issue.  This doesn't seem to be due to a shortage of space, as later in the issue there is a 2-page Joke-Box Jury, so I would guess that the second J-B J page was inserted to ease the burden on Frank McDiarmid.

Page 14 is given over to an advertisement for the first issue of IPC's new comic, Misty.

On Wednesday, Cheeky arrives at Baby Burpo's house where Burpo's dad suggests Cheeky challenges Burpo to play his new card game.  This is fortunate, as the centre pages, which usually feature the Creepy Sleepy Tale, this week carry the cut-out Skateboard Snap game.  The aforementioned 2-page Joke-Box Jury follows, with no skateboard-related jokes.

After a skateboard-packed Thursday with Cheeky, Oscar gets into the mood with a Home Movie featuring a boarder, then Mustapha Million converts his mansion into a skateboard park for the local kids.

The Henery Hawk and Bam Splat and Blooie strips have no skateboard content (not surprising, as they're reprints), nor does this week's instalment of Space Family Robinson.

Page 31 features a photo of a chimp on a skateboard (yet more fillage, I suspect), and the back page carries a further set of Skateboard Snap cards. 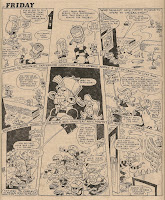 It's great that the Cheeky's Week art on this special issue is provided by Frank McDiarmid, who delivers 8 Cheeky's Week elements (the remaining one being a single panel which concludes Saturday and looks like a cut-and-paste job to me).  It's nice that the skateboard theme is carried into the other humour strips in the comic, too (except, of course, the reprints).  On the downside, as I've mentioned before, I never like cut-out features, and the inclusion of the snap game seems rather uninspired, and were I not confident that the Cheeky Weekly editor believes that such cut-out features increased sales, I'd be tempted to describe the snap game as another filler .


There are no Cheeky's Week character debuts or departures this week, but we do say goodbye to Henery Hawk who will mercifully trouble us no more in future issues.  Now if they would just get rid of these Warner Brothers strips altogether…