Artwork by Ron Turner was seen in Cheeky Weekly's Archie's Angels, and in the Malice in Wonderland strip in the first Cheeky Summer Special. I'm far from being an expert on Ron's work - all I know is that I very much like what I've seen of his art. 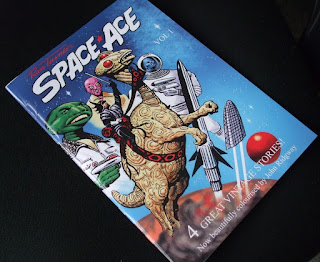 Some of Ron's strips from the 1950s have recently been published by John Lawrence in Space Ace Volume 1. These sci-fi tales, taken from Lone Star Magazine and the Lone Star Annuals, originally appeared in black and white but in this collection have been coloured by John Ridgeway. As the title implies, the volume depicts daring pilot Space Ace hurtling into intergalactic action as he attempts to thwart the evil designs of an assortment of alien and human opponents.

The artwork is of course excellent, and the colouring really enhances Ron's work, lending the stories a cinematic appearance which deserves to be savoured in detail once each of the tales have been read.

This is the first of what will hopefully be a series of Turner collections. Ordering details (and examples of some of the internal art) can be found on the Bear Alley blog here.

A couple more interesting Ron Turner links; Irmantas has just posted an example of a Ron Turner humour strip which is a delightful revelation to me. I must admit that for the first couple of pages I couldn't see Ron's work, but as the story progresses the Turner hand becomes more apparent, and it's a cracking set, demonstrating the artist's adaptability. A delicious collection of Ron's cover art can be seen here.
Posted by Niblet at 15:41