The first thing to strike regular Cheeky Weekly readers about this issue is its size. Not in terms of the number of pages, which is the usual 32, but the size of each page is bigger than normal. The size of the printed area remains the same, meaning there's a larger than usual border at the bottom of each page. The small print at the foot of page 28 reveals that this edition has issued from the presses of regular printer Southernprint Ltd. Maybe they had a paper crisis. Whizzer and Chips is also a larger-pages-than-normal issue this week. 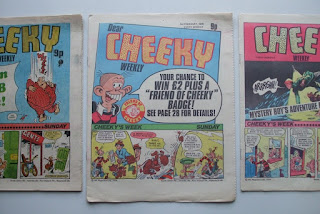 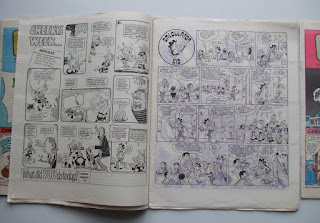 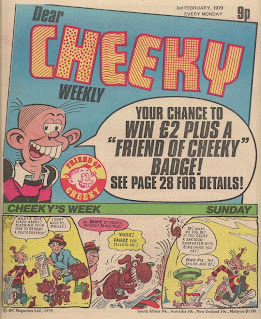 The 'standard Cheeky face' makes a front page appearance for the fourth time (see also issues dated 25 March 1978, 17 June 1978 and 08 July 1978) as the main cover pic directs readers to the Chit-Chat letters page where readers lucky enough to see their missives to the toothy funster in print can expect cash prizes and Cheeky badges.

Sometime between Cheeky's appearance in the cover strip and his return on page 2's continuation of Sunday, it seems a sudden cold snap has descended on Krazy Town (as it had in the 20 January 1979 comic). This time the temperature is so low that the comic frames are freezing up, and  the toothy funster is now sporting a scarf to match his trademark jumper.


6 Million Dollar Gran suspects the Potts kids are about to buy her a birthday present in her story this week. Do robots have birthdays?

This week's Calculator Kid story is unusual as there is tension between Charlie and Calc early on. Charlie should maybe have reined in his criticism of his electronic pal, as Calc tastes revenge at the end of the tale, while Charlie has to contend with something distinctly less palatable.


The last in the run of three mazes drawn by Steve Bell's appears on page 8. This week readers have to determine which of four trains is on the track that will lead it to the station. Steve includes a character called The Bulk, who bears a strong resemblance to a green-skinned comic superstar with anger management issues.


The final 16 cards (featuring 4 each of Lily Pop, Granny Gumdrop, Do-Good Dora and Louise) for the Friends of Cheeky Snap Game are printed in colour on the centre pages of The Mystery Comic. Instructions (it's just a straightforward Snap game) are printed on page 24, beneath Joke-Box Jury. Bumped from The Mystery Comic this week due to the intrusion of the game is Elephant On The Run.

Despite the frosty frolics witnessed in the early part of Cheeky's Week, Tub and Disaster Des are the only characters to have snow-related adventures in this week's Mystery Comic.

Turning to page 22 and the resumption of Cheeky Weekly, we find that Mike Lacey has taken over the artwork duties from Frank McDiarmid who had drawn all the Cheeky's Week elements before the Mystery Comic section. Mike also draws The Burpo Special, in which the belligerent baby interviews Bump-Bump Bernie.


Tub, sitting on a seesaw and using his bulk to launch a slap-up feed from the opposite end into his gaping gob, is the subject of the back cover's Pin-Up Pal poster drawn by his usual artist, Nigel Edwards.

The Cheeky's Week artwork duties in this issue are shared by Frank McDiarmid and, as mentioned above, Mike Lacey, each of whom provide 5 elements depicting the toothy funster's daily doings (plus the Burpo Special which, after much deliberation in the early days of this blog, I decided to include as a Cheeky's Week feature). Mike also supplies his usual strip Disaster Des. The snowy spell which Frank establishes in Cheeky's Week as of page 2 evidently comes to an end on Wednesday night, since from the point at which Mike Lacey takes up the pencils, no snow is to be seen and Cheeky's scarf is no longer present. We will learn in the 19 January 1980 edition that Frank McDiarmid enjoys illustrating snowy scenes.

This is the first time the Cheeky's Week elements have been supplied by more than one artist (or single pencil/inker collaboration) in a single issue since the 23 September 1978 comic (with the exception of the 06 January 1979 'standby' issue). It seems that the policy of having no more than one artist on Cheeky's Week per issue, which has been evident as of 30 September 1978's revamp number is beginning to break down.