...Well, not quite, but it seems that Lew Stringer has included our toothy pal in his intro that will appear in the forthcoming Cor!! and Buster Special. Nice touch. Clearly, Cheeky never appeared in either of the vintage comics in question but Lew is of course aware of this so the intro probably features a selection of IPC characters from across their titles. But maybe the contents aren't restricted to strips that appeared in Cor!! and Buster. The cover, by Neil Googe, includes Hit Kid who certainly never appeared in Cor!! and I would imagine if he appeared in Buster it was in the form of reprints from Krazy.
Posted by Niblet at 10:59 4 comments:

In Cheeky Weekly’s first issue our toothy pal tracked down the latest edition of the Mystery Comic in the waiting room of dentist Ivor E Tugger, although the tooth-wrangler himself did not appear on that occasion. Considering Cheeky’s mouthful of magnificent munchers it’s surprising that dentists did not figure more regularly in his life, and the funster's next dental encounter was presented on the cover of the 02 September 1978 issue, in the What A Cheek strip. Presumably the forceps-equipped gentleman causing Cheeky's discomfort was Mr Tugger.

Our grinning hero's next interaction with the molarmeister came almost a year later in the 04 August 1979 edition, and it seems Ivor had grown a moustache in the intervening period.

The dentist returned in the comic dated 08 September 1979, although his name had been removed from the plate by the surgery door at this stage (but his upper-lip adornment was more luxuriant than previously).

The final dentist gag, a single-panel quickie, appeared in the 13 October 1979 edition, by which time the funny fang-fixer had evidently decided his 'tache was surplus to requirements. UPDATE - this wasn't in fact Ivor's farewell - see below.

UPDATE 14 March 2019 - I've just found another appearance by Mr Tugger, in the final edition of Cheeky Weekly - see below...

Ivor never appeared in the Cheeky pages in Krazy.


A month after heroically raiding Memory Banks, our middle eastern mate was intruded upon by a weaselly Whizz-kid once again. The raider-infested Mustapha Million strip which appeared in Whizzer and Chips dated 25 July 1987 was originally presented in Cheeky Weekly's 15 July 1978 edition (minus interloper, of course), and had previously been reprinted in the 27 October 1984 issue of Whoopee. If you're feeling lazy you can scroll down to see the identity of the intruder.


Whoever the raider is revealed to be, I just hope they don't say it....

I mean, they've used the same phrase over and over again...

Surely they'll come up with something different this time... 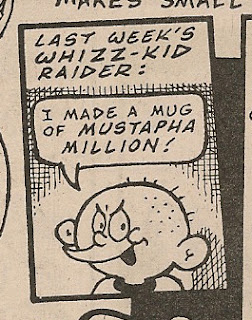 ...to be fair, I suppose it's a little unrealistic of me to expect the indolent Benny 'Lazy' Bones to expend any energy on thinking up a new slogan.

The weary Whizz-kid had previously summoned enough stamina to raid Calculator Kid in the 15 February and 31 May 1986 issues of Whizzer and Chips.

My decision to devote a Profile post to this particular Krazy Town inhabitant contradicts my declaration here that to qualify for this honour the character must possess a name. In fact, the 'character' under examination this time is an inanimate object (although there is a human being associated with it), but then again so are the Knock-Knock Door and time-traveling Phone Box, both of which have received a Profile post despite not having names as such, so let's press on.

It seems to me that the Hot Air Balloon (HAB) was a creation of a Cheeky's Week artist who I am unable to identify, and refer to on the blog as Unknown Cheeky Artist 1 (UCA1), since this artist was the only one to depict the blimp floating above Krazy Town. HAB made its debut appearance, being pursued by a large bird, on the Saturday page in the 11 February 1978 issue. This wasn't the first occasion on which UCA1 had drawn an aerially-drifting object, as the same artist included Bubblegum Boy (BB) hovering above Cheeky's home town in the comic dated 14 January 1978. That was the only occasion on which UCA1 drew the perpetually-drifting Fred Holroyd, so fortunately readers were spared the sight of a mid-air collision between HAB and BB.

The next issue to include artwork by UCA1 was that dated 18 February 1978, but HAB was not in evidence on any of the 4 pages which the artist contributed that week. UCA1 next provided work in the 04 March 1978 edition, and 2 of the 5 pages that were delivered by the unidentified artist did feature the subject of this post; on Thursday the balloon was punctured by an arrow, the source of which was unseen, and the following day the perforated sphere continued to  Proooooop!! across the sky.


A week later 3 of the 6 Cheeky's Week elements drawn by UCA1 contained images of the still-damaged dirigible being propelled through the firmament by the gas leaking from its unwelcome aperture, the occupant remaining surprisingly mute considering his predicament.

UCA1 was next drafted in to provide visuals for the 25 March 1978 edition, which was the last to include the hot air balloon, and was the only time that its occupant spoke.

Please note the following page contains material which would be considered inappropriate today...


HAB never appeared in the Cheeky strips in Krazy.

It’s the penultimate edition of Cheeky Weekly, although readers picking it up from the newsagents’ counters all those years ago would have been unaware that was the case (however there are intimations of the imminent demise of our favourite comic inside this issue as we’ll see). A rather strange cover suggests that Cheeky’s Sunday paper round has been extended to include Tarzan’s jungle abode. This rather jarring cover, abandoning any pretence of a link with the toothy funster's Krazy Town locale, makes me wonder whether  the creators were, by taking this liberty with the setting, signalling (maybe subconsciously) that the end of the title was looming. Nevertheless, Frank McDiarmid furnishes a nice depiction of the bellowing vine-swinger.

Over the page we’re back in Krazy Town for the remainder of Cheeky’s deliveries, and the weather has improved since the snowy conditions that prevailed in last week’s comic, although Gloomy Glad’s personal rain cloud is, as ever, precipitating.

The kids of Stage School are on an educational trip to the museum, but they’re not enjoying it so use their showbiz wiles to trick Sir into spinning what he thinks is a piece of ancient pottery atop his cane.

This gets Teach into a state of nervous exhaustion and the entire group ejected from the building, so the kids head for their Stage School and a lesson from their (rarely-seen) cravat-sporting showbiz teacher. This is the final time Robert Nixon will draw the aspiring performers in Cheeky Weekly - Barry Glennard will deputise next week.


This week’s episode of Elephant on The Run sees our pachyderm pal return to employment in the circus. Cheeky Weekly readers who have followed this feature since its first episode will recall that in the opening instalment a terrible accident befell the amnesiac tusker while he was appearing at Tingaling’s Circus. The final panel of this week’s adventure could almost serve as a conclusion to the story, with The Man in the Plastic Mac seemingly frightened off and Elephant happy in his new circus role. What is missing, of course, is an explanation of why our be-trunked hero is being pursued. Maybe we’ll discover the reason in next week’s comic (non spoiler alert – we won’t).

Mike Lacey takes over the artwork duties from Frank McDiarmid on Cheeky’s Week as of Thursday.

I don’t often show Tub strips, mainly because it’s not a favourite of mine, but this one’s not too bad as our portly pal gets one over on his rather unpleasant dad. 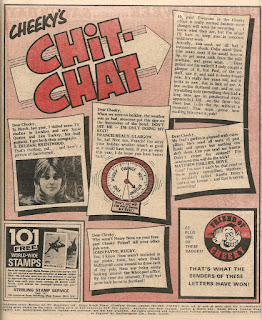 There’s no particular theme to Cheeky’s Saturday, so our toothy chum roams Krazy Town exchanging gags with his pals, as he does most days. Is the billboard a deliberately ironic inclusion?

This issue sees the final Cheeky Weekly appearances of


And we also say goodbye to the Paddywack strip (although the witless welly-wearer will continue to confound in Whoopee!). This week's Cheeky's Cut-Out Comedy Catalogue, featuring gags relating to Krazy Town's jovial joiner Mr Chips, is the final one. Ian Knox delivers his final 6 Million Dollar Gran artwork (Nigel Edwards will provide the visuals next week).