After Mustapha Million's raid in the first combined issue of Whizzer and Chips and Whoopee dated 06 April 1985, three further issues passed without raids involving ex-Cheeky Weekly characters. However, our middle-eastern pal's excursion into Whizzer evidently rankled with those wily Whizz-Kids, as four weeks after he intruded upon the Whizzer pages, Mustapha was himself targeted in a revenge raid. Can you spot the interloper? Scroll down to see the culprit revealed.

...Bloggs from the Store Wars strip.

Just for a bit of fun, I'm going to be keeping a tally of the number of raids perpetrated by and executed upon the ex-Cheeky Weekly characters...

As 1977 drew to a conclusion, Cheeky Weekly readers concerned that they lacked somewhere in which to record their doings over the forthcoming year were no doubt relieved to read the announcement on page 30 of the comic dated 26 November - the first instalment of the Cheeky Diary 1978 was to appear in the following issue.

The Cheeky diary was prominently featured on the cover of the 03 December 1977 comic, in which the debut instalment appeared on pages 31 and 32. In fact all four instalments of the diary were similarly located, allowing each part to benefit from the colour printing that was available on the back cover/page 32.

Friends of Cheeky who were so inclined could cut out and fold each section in half to make 4 diary pages. Having collected all the sections readers were able to assemble the pages (taking care to observe the correct chronology) into a booklet wherein they could chronicle 12 months of japes and jollifications. 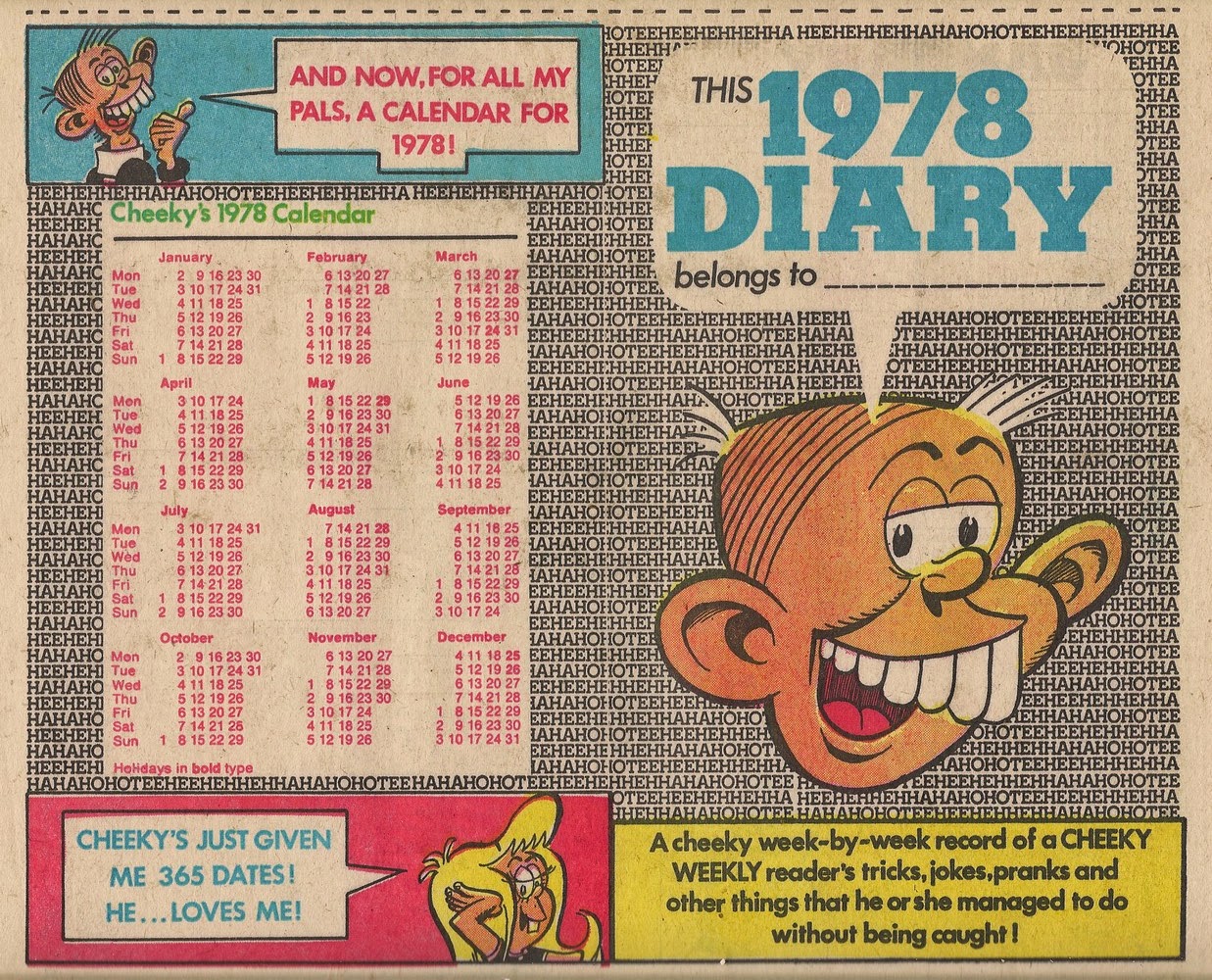 The diary cover features an appearance of what I refer to as the 'standard Cheeky face (printed numerous times during Cheeky Weekly's run and used at the top of this blog), which I have always assumed was produced as a reference drawing or 'model sheet'. 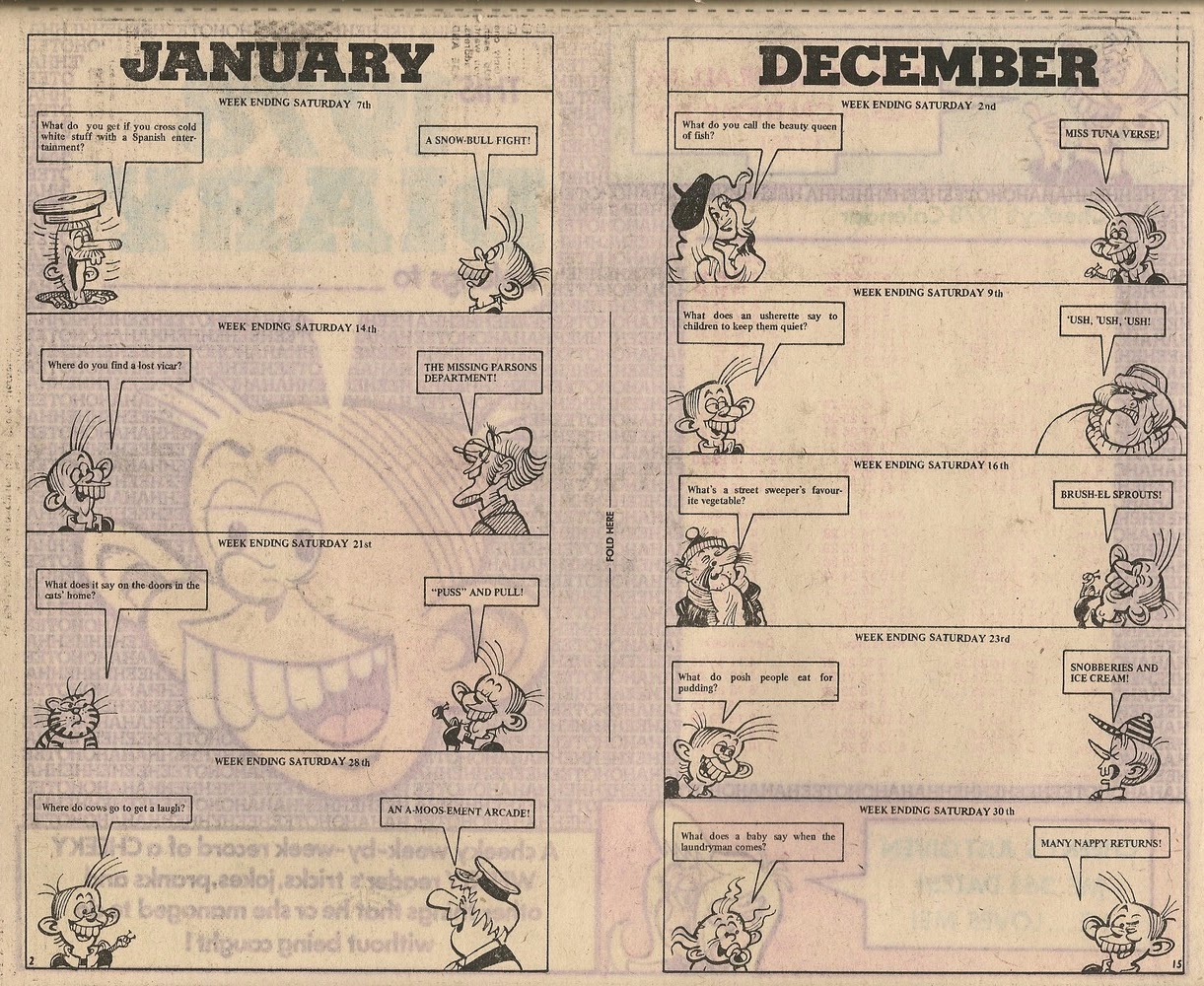 Apart from the standard face, all the diary art was by Jim Petrie (this wouldn't be the last time Jim would contribute a cut-out feature).

Unlike a more traditional daily diary, this booklet provided space to record events by week only, with our grinning pal sharing chortlesome banter with one of his chums in each slot. Jim gave Cheeky a nice assortment of expressions, and there was a bonus centre spread. 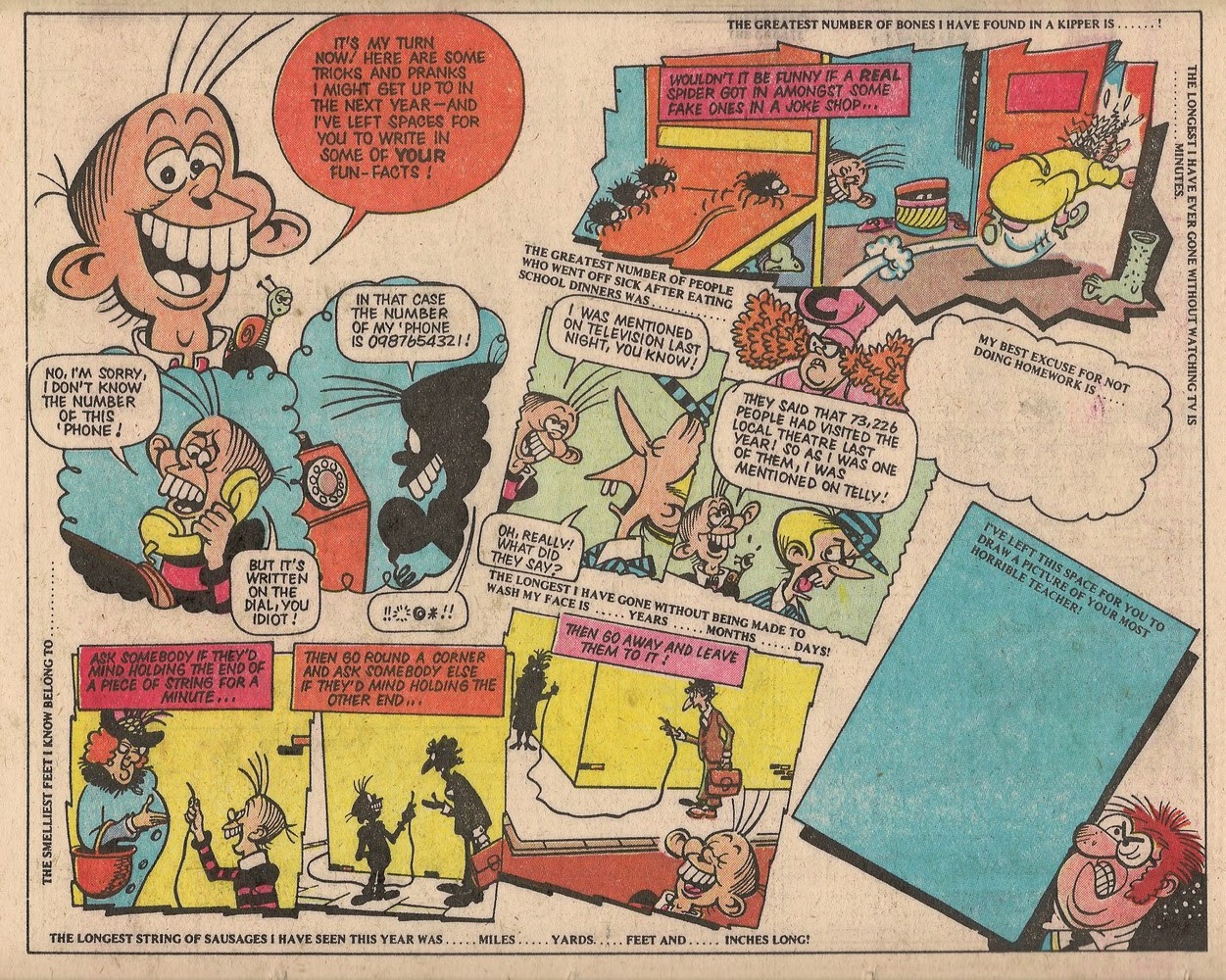 Readers of the toothy funster's title were given the opportunity to record their daily happenings in the the What did YOU do today? section, introduced into the Cheeky pages as of the 30 September 1978 issue, as the comic underwent its second revamp.
Posted by Niblet at 16:27 No comments:

As IPC's 1979 Star Guest promotion reached week 10, the toothy funster himself was called upon to represent his comic within the pages of Whoopee! dated 02 June. This was Cheeky's second full-page Star Guest outing, his previous being in 28 April's Whizzer and Chips.

As with Cheeky's earlier Star Guest appearance, Barrie Appleby supplies the artwork. Frank McDiarmid provided all the Cheeky's Week elements in the toothy funster's comic that week, so was presumably too busy to take on the promotional strip as well. Whoopee! readers are introduced to a different set of Cheeky's pals to those featured in his earlier Star Guest visit to Whizzer and Chips, but this strip doesn't benefit from the spot colour that livened up that earlier page.
Our grinning pal, never afraid to address readers directly, informs Whoopee! fans that they can enjoy more of his corny jokes in Cheeky Weekly so, as with Cheeky's previous Star Guest outing, there's no need for Star Guest's customary caption at the bottom of the page directing interested parties toward the source title. Any comic consumers persuaded to place an immediate order for the toothy funster's funny paper could have enjoyed a 36-week run of Cheeky Weekly before it succumbed to the inevitable merge and was absorbed into Whoopee! itself. 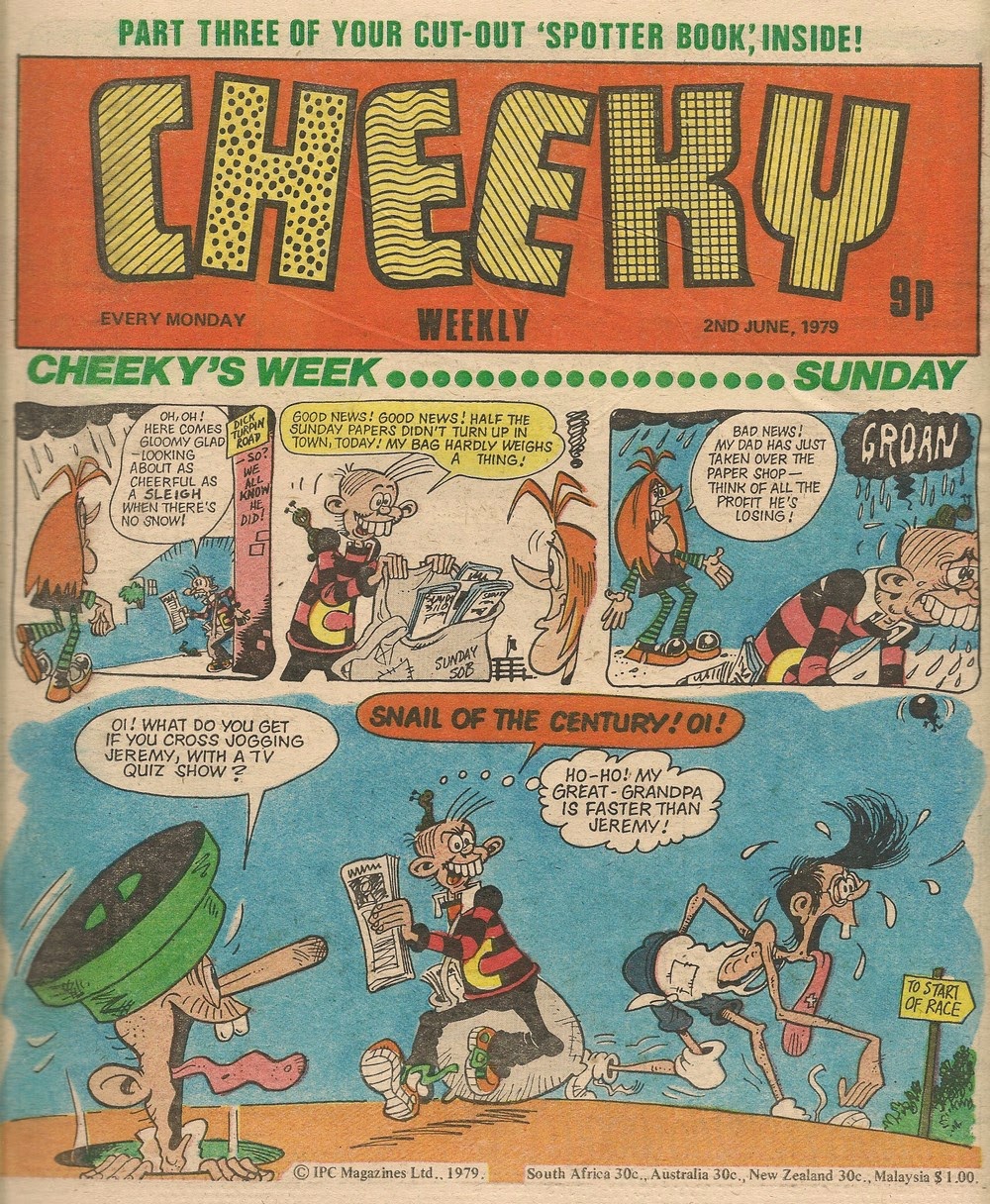 Issue 82 of the toothy funster's comic kicks off with a Frank McDiarmid Cheeky's Week...Sunday involving Krazy Town stalwarts Gloomy Glad (making her second and final cover appearance), Manhole Man (his 17th appearance on the front page) and Jogging Jeremy (cover appearance number 6 for the feeble fitness fanatic). Bubblegum Boy, still drifting above the streets, is on the cover for the 11th time. Frank adds to the comedic cover capers with a Dick Turpin graffiti gag. Maybe the tag line to the closing front page joke gave someone the idea for the strip of the same name which commenced in the 14 July 1979 issue.
Nigel Edwards stands in for regular artist Ian Knox on this week's 6 Million Dollar Gran, in which the synthetic senior citizen visits the village fete with customarily chaotic consequences.
Calculator Kid has a run-in with fearsome Basher Briggs this week. All bullies in comics are called Basher Briggs – is it the same bloke in all the stories? Strips featuring bullies end with the hero triumphant and the ruffian's evil designs thwarted, but we all know that in real life the bully would be waiting outside the school gates the following day with the intention of administering a severe thumping.


This week's Star Guest, appearing within the Cheeky Weekly section rather than within the Mystery Comic as it has on 5 previous occasions, is the ever-beaming Smiler from Whoopee! Let's enjoy this story in which the indomitable hero encounters a car mechanic whose attitude problem suggests he may very possibly be Basher Briggs' dad...


The Mystery Comic is wrapped inside Cheeky's Wednesday dinner-time napkin this week. This issue of the perplexing publication is the briefest yet, at only 6 pages (it's the shortest of all 37 issues), so although there are no ads or other intrusions (this week's instalment of The Cheeky Spotter Book of Town and Around is located within the Cheeky section), Disaster Des and Why, Dad, Why? are absent.

On the Thursday page, Frank McDiarmid includes a running gag inspired by a famously talkative dog on TV's That's Life!


On the Chit-Chat page, our grinning pal passes on some news about a forthcoming special issue of his comic... 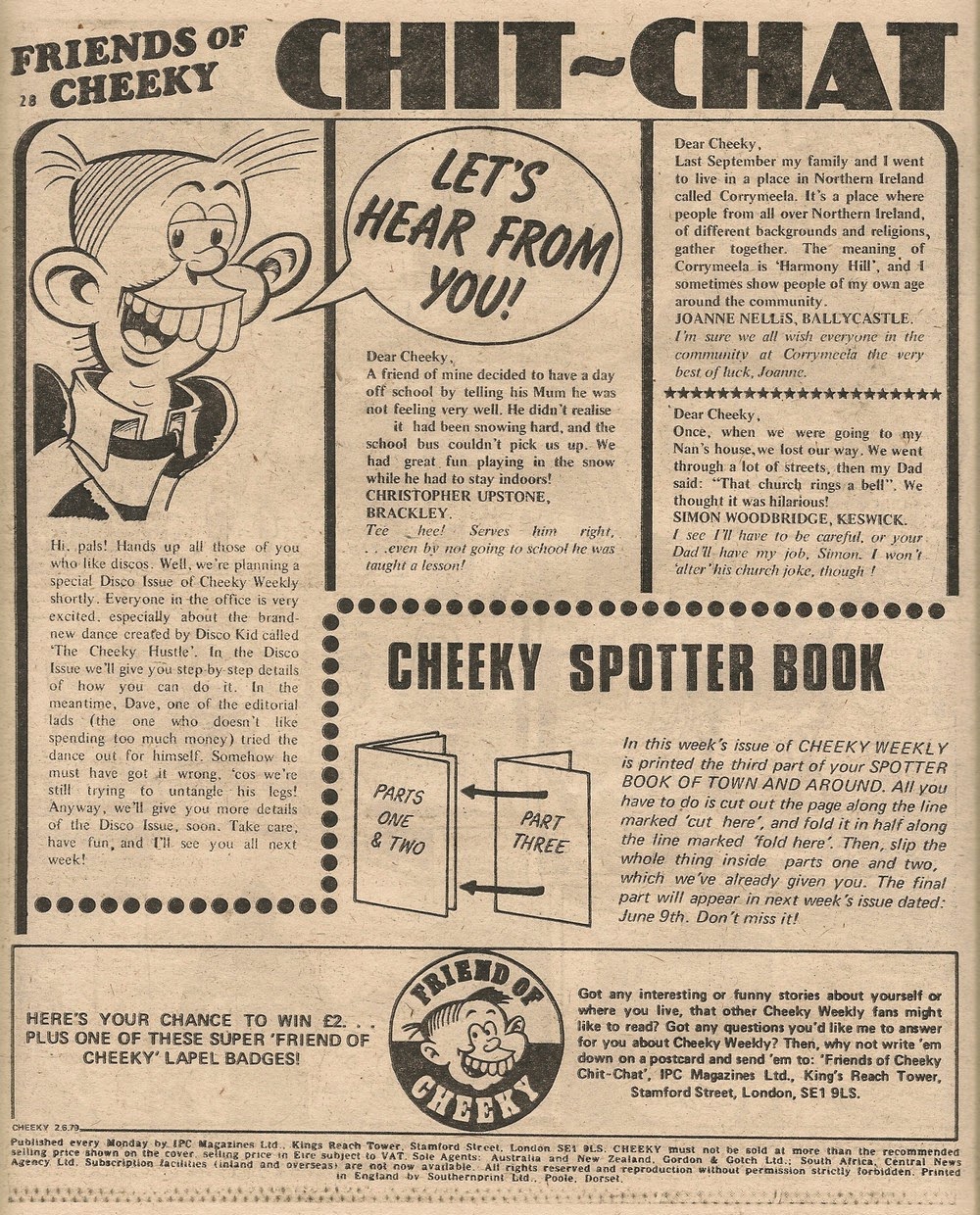 Unlike recent issues, there's no particular theme to Cheeky's Saturday – he's just wandering around swapping jokes with his pals, much as he does every day. There's no Burpo Special this week - the back cover is the location of a Trebor competition in celebration of the news that their Chews are now bigger than ever, a fact which no doubt has dentists all over the country firing up theirs drills in readiness.
Pleasingly, Frank McDiarmid delivers all 9 Cheeky's Week elements in this issue (the last all-pure-Frank Cheeky's Week was in the comic dated 21 April 1979).

Since its inception Whizzer and Chips styled itself as 'two comics in one', and messages to readers from Sid (leader of the Whizz-Kids) and Shiner (head Chip-ite) within its pages encouraged a friendly rivalry between those who preferred Whizzer and those whose taste leaned more towards Chips. A weekly notice advised kids that the two comics could be separated by careful manipulation of the staples, but I doubt many readers did that on a regular basis.

By the time Whoopee merged into Whizzer and Chips, the latter title had established a long tradition of 'raids', whereby a character from one section of the comic would make an unexpected appearance (by means of a cut-and-pasted image) within the pages of the other.

In this new series of posts I'll be documenting the raids involving the ex-Cheeky Weekly characters, either as perpetrator or victim. Mustapha Million and Calculator Kid were the two features that originated in Cheeky Weekly and survived into Whizzer and Chips as regular weekly strips, with Stage School making only two appearances after the merge.

Our prosperous pal Mustapha Million certainly didn't waste time in embarking on a raid, as he intruded upon the Super Steve v NME Nasties strip in the first combined Whizzer and Chips and Whoopee, dated 06 April 1985... The gimlet-eyed among you couldn't have failed to notice Sweeny Toddler gatecrashing the strip and exposing the invader, but as made clear by Chief Chip-ite Shiner this wasn't a raid, the terrible toddler appeared on several pages of both sections in that issue (but not on Mustapha or Calc's pages) as he sought out the location of his strip. It turned out that his adventure appeared on the back page in that edition, but Sweeny subsequently deposed Sid from the prestigious front-cover slot he had previously shared with his serpent sidekick Slippy.