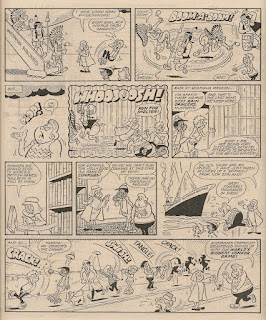 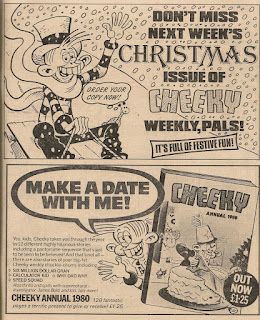 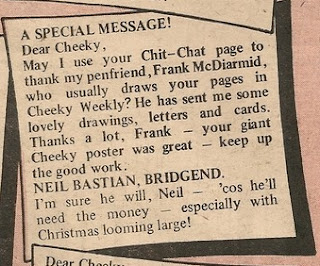 You're safe with Cheeky

I've just caught up with this post over at the Boys Adventure Comics blog. It presents an article from the July 1987 issue of the Society of Strip Illustration newsletter in which the editor of Oink!, Mark Rodgers, discusses the pig-centric publication. He also mentions that Bob Paynter, IPC Group Editor, was apparently of the opinion in 1987 that Krazy and Cheeky Weekly (from an earlier era of course) 'failed because they played too safe'.
Posted by Niblet at 17:26 No comments:

Cheeky introduced Welsh wag Taff the Laff in the 14 July 1979 edition of his comic. Where Taff had been for the preceding 87 issues was never explained. Maybe he had only recently moved from the valleys to Krazy Town.


...but by the time of his third outing the comical couplets had been restored...


In the comic dated 18 August 1979 the leek-loving lad shared a name-based quip with our toothy pal on Monday and again on Wednesday. Taff also appeared twice in the 08 December 1979 edition, but his second outing that week was in a non-speaking, background role.

Cheeky Weekly dated 10 November 1979 saw a reversal in the usual order of things as the toothy funster told Taff a joke rather than the other way round. This was one of those occasions when the panel containing the set-up was at the end of a row, and the punchline appeared in the first panel of the following row, a situation which does not make it easy to present a decent scan of the gag. I'll just tell you that Cheeky's payoff was "A Taffodil", and you can probably figure out the joke yourself.

Taff appeared on the cover of the comic dated 12 January 1980, sharing a rugby joke with our grinning hero, and the Welsh wit also appeared on the Monday page in the same issue. The laffing lad's final Cheeky Weekly appearance was in the last edition of the comic, bringing to 26 the total number of issues in which Taff appeared. He never featured in the Cheeky pages in Krazy.

Email ThisBlogThis!Share to TwitterShare to FacebookShare to Pinterest
Labels: Profile, Taff the Laff

A number of the supporting cast who populated Cheeky's Week in his own comic originated in the Cheeky pages in Krazy. However not all the characters who appeared in the toothy funster's Krazy strip made the transition into Cheeky Weekly.

A year before Uncle Hamish made his debut in Cheeky Weekly, our toothy pal (at this time still sporting a 'K' on his jumper - he didn't begin wearing the sweater bearing his initial until Krazy dated 20 August 1977 in his own strip, although it was a week later before the toothy funster's 'C' jumper appeared on the Krazy Gang pages) had an encounter with another comical Caledonian...


Cheeky's diminutive pal from north of the border made no further appearances in Krazy, nor did he transfer into Cheeky Weekly. As mentioned above, the role of frugal Scot in the pages of the toothy funster's own comic was fulfilled by Uncle Hamish.
Posted by Niblet at 15:40 No comments: