We Whiz You A Merry Chipmas - Part Two

Following on from my examination of the contents of the Whizzer section of the Christmas 1986 Whizzer and Chips, I'm now going to scrutinise the festive doings which occurred within the Chips portion of that same Yuletide publication.

As was the case with that week's copy of Whizzer, a story ran through the pages that constituted Chips. Chips' resident sleuth, Mizz Marble, was called upon to investigate the apparent theft of Shiner's Christmas presents to his Chip-ite chums.


Unlike the Whizzer section, where apart from the usual raider, no characters from the rival title appeared, the Chips story included cameos by several Whizz-kids as the investigation got under way on the Junior Rotter page. 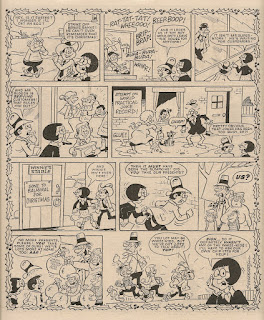 Over the page, Phil Fitt chased a couple of suspects but neither turned out to be the present pilferer.

Titchy Chip-ite Sammy Shrink was the next to be embroiled in the mystery, and our pint-sized pal placed a suitably seasonal message in the border around his strip.

Mizz Marble then enlisted Town Tarzan in the search. 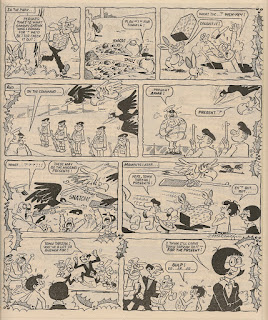 There then followed a 2-page break to allow for readers' Christmas messages to friends and family, but the search resumed as Mustapha Million (by this time the sole survivor from Cheeky Weekly) recruited fictional sleuths Inspector Clueless (Clouseau), Sherlock Holmes (with Doctor Watson), Kojak, Cagney and Lacey, Magnum P.I. plus Crockett and Tubbs (from TV series Miami Vice). I think the glasses-wearing guy in the baseball cap is meant to be the helicopter pilot from either the Blue Thunder film or the subsequent spin-off TV series of the same name. Not only that, the strip concludes with a reference to vintage American TV police comedy Car 54 Where Are You? 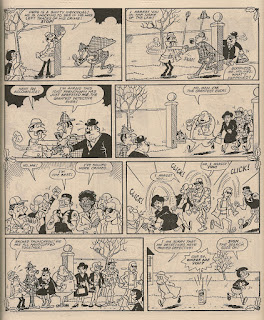 The action then moved to the Bottom Of The Class page. This strip's title would later contract to 'Bottom' (some years before Rik Mayall and Adrian Edmondson appropriated the title for their own comedic purposes), and the stories would then revolve around protagonist Rock's unfortunate habit of tearing or splitting his trousers, but at this point the humour usually focused on the titular lad's surname and resultant posterior-based hilarity. However at the end of this particular episode Rock is trapped under the mistletoe by ugly Cynth and suffers a selection of slobbery kisses...

...hence the hideous sucking noises originating off-panel at the commencement of Creepy Comix which, as well as participating in the ongoing investigations, also contained the conclusion to the JR/Bumpkins subplot that commenced earlier.


The Case of The Missing Presents then reached its dramatic climax as all was revealed. Like the Whizz-Kids, our Chip-ite pals enjoyed a well-deserved traditional festive nosh-up at the conclusion of their storyline. 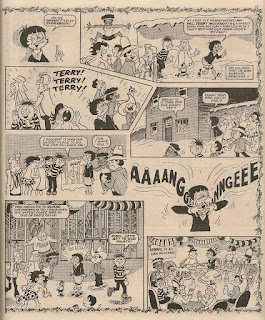 But that wasn't quite the end of the riddles, as on the following page readers were challenged to identify the contents of the recovered Chip-ite parcels. The Whizz-kids had an equivalent page in their section which consisted of instructions for the party games as played at their Christmas get-together.


The Christmas 1986 Whizzer and Chips was a real Yuletide treat, and the extra effort that was no doubt required from the creators paid off very well. As far as I know it was the only IPC comic to feature plotlines running across the various strips in a single issue (I think DC Thomson may have done something similar on one or two occasions). This edition was so fun-packed that it featured no internal adverts at all – there was just a Weetabix ad on the back cover. Also, as Stephen Archer commented on part one of this post, this edition was, unusually, entirely free from reprints. The running storylines also meant that the strips presented here were very unlikely to be used as reprints themselves.

P.S. Rather ironically I forgot to include reference to the Memory Banks strip in the first part of this two-part post. I have now made a minor update to rectify my omission.
Posted by Niblet at 17:22 6 comments:

We Whiz You A Merry Chipmas - Part One 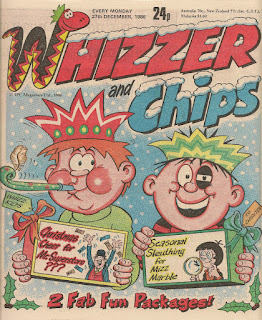 Excited youngsters lifting the 1986 Christmas issue of Whizzer and Chips from the newsagents' shelf would, while enjoying the cover depicting a seasonal truce between rivals Sid (Whizz-kid leader) and Shiner (chief Chip-ite), have wondered what '2 fab fun packages' lay in store as they commenced their Yuletide reading. This cover teaser heralded an unusual festive edition of the long-running two-in-one comic, wherein the Whizzer and Chips sections each contained a running storyline that continued across the individual strips in the constituent parts.

The Whizzer plotline began on page 2 where Mr Superstore from the Store Wars strip was, as usual, finding it hard to compete with neighbouring retailer, Bloggs...

The action continued overleaf, as sugar-craving Sweet-Tooth seemed about to visit Superstore in search of his Yuletide glucose fix...

On Winnie, The Royal Nag's page, the titular equine heroine was required to pull Charles and Di's carriage as they visited Superstore, intent on a regal Christmas shopping spree.

Toy Boy was Mr. Superstore's next target, and things were looking good for the shifty shopkeeper...

Likeable loafer Lazy Bones seemed to have generated a sale, but ended up being given a ride home courtesy of Bloggs' assistant Ted and his delivery bike. This strip was also the subject of a seasonal sneaky raid by a Chip-ite invader – can you spot the infiltrator?

Next up was Whizz-Kid leader Sid and his serpentine sidekick Slippy.

Mr Superstore then turned his attention to Joker.

Surely the Bumpkins, always keen to dispose of their unwanted millions, were only too willing to bestow their fortune on Mr Superstore?

A great Odd-Ball page followed...love how the Odd-Balls from the surround merge into the first panel of row 3.


Whizzer's forgetful Bernie 'Memory' Banks was the next to encounter greedy Mr Superstore.


Sadly, Mr Superstore didn't undergo a Scrooge-like redemption as the story came to a conclusion (the strip had to continue as normal in the new year, after all) but at least things ended on a traditional Christmas slap-up feed. Were the years of festive face-filling finales in British comics inspired by the Cratchits dining on Turkey at the end of A Christmas Carol? Discuss. But not here.

Part 2 of this examination of Whizzer and Chips' Christmas 1986 edition will be a little more on-topic as I report on, among other things, Mustapha Million's role in the Chips section of this issue.
Posted by Niblet at 18:25 6 comments:

For a profile of Bubblegum Boy's career in the pages of Krazy, see here.

Bubblegum Boy had the honour of appearing on the cover of Cheeky Weekly's debut issue, where he narrowly avoided a collision with the flying free gift. Inside that same edition, BB's appearance on the Sunday page saw him musing philosophically on Krazy Town's signage before drifting away on the breeze. From thereon BB continued to float, silent and unnoticed for the most part, across the cartoon skies as depicted in Cheeky Weekly, in exactly the same way as he had in Cheeky's strip in Krazy prior to the launch of Cheeky's own title. Indeed, our aerial chum continued to appear in Krazy while concurrently floating across the pages of Cheeky Weekly.

Soon after the debut of the toothy funster's comic, BB was honoured with his own episode of the Cheeky's Pal feature in Krazy's 10 December 1977 edition, wherein it was revealed that the reluctant aviator's name was Fred, although this fact was never referred to again in Krazy, and only once more in Cheeky Weekly.

A month after his cover appearance on the first Cheeky Weekly, Fred was again on the front page of the 19 November 1977 issue. 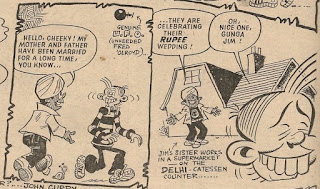 Young Master Holroyd was back on the front cover of the 22 April 1978 comic, where his likeness was in fact the same image that had appeared on the cover of the first issue.

Our airborne chum made yet another front page appearance on the edition dated 13 May 1978.

A catastrophic mid-air clash between BB and B-BB occurred on Monday in the 05 August 1978 comic. 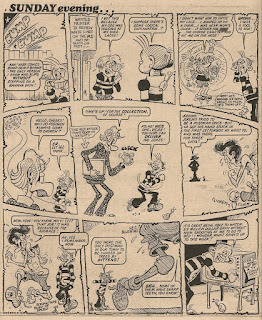 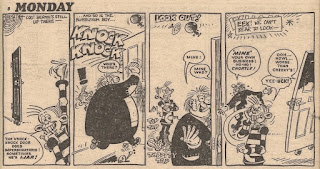 In Cheeky Weekly's '60 years into the future' edition, it was prophesied that an aged Fred will still be airborne in the year 2038. 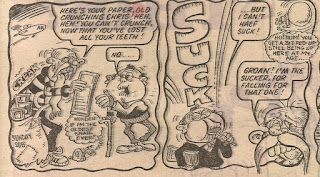 The hapless chewer was again on the cover of the 14 October and 28 October 1978 issues, on these occasions observing events within the front page gag strips.
The cinema Commissionaire employed a gum-bubble to evade his customary Saturday trampling in the issue dated 04 November 1978.


The reluctant aviator was once again on the cover of the comic dated 25 November 1978, and he narrowly avoided a rapidly-descending Tub on the 27 January 1979 cover.


High-flying Fred was yet again witness to front page frolics as of the 02June 1979 edition.

A plaintive cry from the sky on Sunday in the 09 June 1979 edition revealed that our airborne chum's birthday was the 2nd of June.

Bubblegum Boy's aerial wanderings took him to the coast in Cheeky Weekly dated 07 July 1979, just in time for a wee joke with Walter Wurx.

Our drifting pal had a speaking role on the cover of the 11 August 1979 issue.

Fred joined Cheeky Weekly's front cover fun for the final time as of the 03 November 1979 issue, and his final appearance within the pages of the toothy funster's title was on the Friday page of the last issue dated 02 February 1980.

This last appearance brought to 73 the number of Cheeky Weekly issues through which our soaring pal drifted, 13 of which featured BB on the front cover.