Disco Kid boogied into Cheeky Weekly in the 08 July 1978 comic, and bopped his way across 67 editions, surviving into the final issue.  According to his first appearance, Disco Kid, who was seen with a copy of the NME (IPC's influential music paper) in his pocket, was so-named because he was frequently to be found in discos.  His main role in Cheeky's Week was to set up music and pop group puns.

The funky fun-maker, who was almost as generously-endowed with dentition as Cheeky, featured throughout Cheeky's Week in the issue dated 16 September, when he was seen carrying placards containing TV show and pop group puns, in support of his campaign to get more pop music on TV.  Sample slogans; 'Put Queen in Crown Court', 'Less cricket - more Darts', 'Showjumping out - Showaddywaddy in'.  Disco Kid appeared on one of the 2 Pin-Up Pal posters in the same issue.

In the comic dated 28 October 1978, Disco Kid is annoyed to find that he's been sold that week's issue of The Mystery Comic, instead of the sheet music he was expecting.  Needless to say, Cheeky is delighted to take the mysterious publication off his hands. 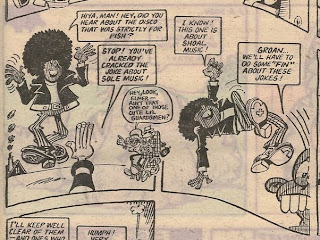 In the 18 November 1978 issue, the perky pop-picker was seen pondering which route to the disco would provide 12 more discs for his vinyl collection, in the back-cover maze. 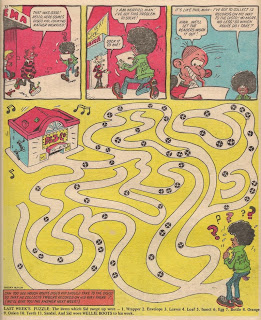 Cheeky met Disco Kid's big brother while visiting a record shop in the comic dated 17 March 1979, and in the 29 December 1979 issue we met our pop-picking pal's father, who was apparently a better dancer than DK.

The centre spread in the 16 June 1979 comic (the 'super disco issue') contained cut-out instructions on how to do the new dance sensation, the Cheeky Hustle.  Disco Kid, Cheeky and Louise were seen on the booklet's cover in the throes of terpsichorean frenzy.  Disco Kid performed the DJ duties at Saturday's big disco in the same issue. 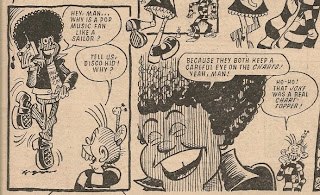 In his early appearances Disco Kid would sometimes wear a bomber jacket with his nickname emblazoned on the back, and his shoes often exhibited signs of makeshift repair necessitated, no doubt, by excessive boogying.  The risible rocker was quite often seen wearing an Olivia Newton-John t-shirt (sometimes abbreviated to ONJ OBE).

Our musical merrymaker featured on the front cover of the comic dated 08 December 1979, dancing with a large bird, as a visual reinforcement of a joke with the punch line 'John Travulture'.  DK was in evidence at Cheeky's Christmas party in the 29 December 1979 issue, where he could be seen bopping furiously, and he was back on the cover on 05 January 1980, among a group of Cheeky's pals celebrating the new leap year.  Inside the same issue the madcap music maniac was one of the revellers at Cheeky's new year party.

Disco Kid was the coolest and most 'street cred' of Cheeky's pals.  Mercifully he wasn't subject to the ethnic stereotyping that afflicted certain members of the Cheeky's Week cast.  He was created for Cheeky Weekly and never appeared in the 'Ello, It's Cheeky strip in Krazy comic.