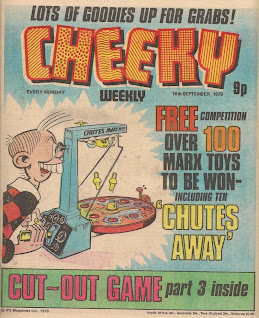 As Cheeky warned us last week, with effect from this issue the cover price has increased by 1p to 9p.  However, to compensate, 100 toys are to be won in the competition running inside.  The cover sees Cheeky testing his skill on one of the prizes, while Snail wisely stays clear of the target area.  The Crack-A-Joke game, now in its third week, also gets a mention on the front page, although now, as if the enthusiasm for it is waning, it's referred to merely as the Cut-Out Game.

On Sunday, Cheeky tells us that he's starting a campaign for more pop music on telly, and Disco Kid says he'll be helping as it was his idea.  This is the first time we've had a 'Cheeky's pal throughout the week' issue since Teacher underwent his breakdown in the 05 August 1978 comic. 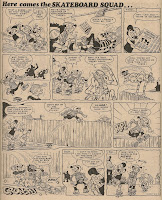 Skateboard Squad feel pity for Cheeky in their strip, having run him over again in the final panel of the Sunday feature on the previous page.  However, their concern for our toothy pal is short-lived as the Squad realise the felon they apprehended last week is on the run, and the intrepid trio are soon rolling in pursuit. 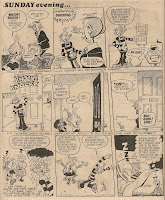 On Sunday evening there's a guest appearance by BBC TV's rugby commentator and It's A Knockout scorekeeper, Eddie Waring, as well as a rare glimpse of a happy Gloomy Glad.

6 Million Dollar Gran sets her sights on a diamond necklace, reduced from £5000 to 5p in a sale.  Taking up position outside the store the night before the sale doors open, Gran has to contend with 2 villains intent on stealing said trinket.  Gran's story is reduced from the normal 3 pages to a 2-pager this week.

On page 14 is the first ad for the first Cheeky Annual.  It's out now but, as is the tradition for British annuals, is dated a year ahead.

Mustapha Million puts his considerable resources towards helping a pal watch his favourite TV show this week.  However, despite having banks of TV screens able to pick up any channel from around the globe, Mustapha's staff are hogging all the screens, so Mustapha's mate has to watch his show in a shop window (but surely he couldn't hear the TV through the glass).  Reg Parlett draws The Two Ronnies on screen, and a copper with a car on his foot in the background. 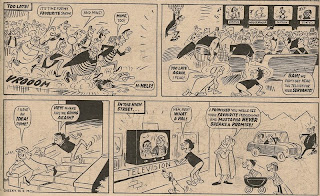 There's a surprise reprint on pages 26 and 27 as the weekly cinema show begins - it's Jim Watson's Hickory Dickory Doc one-off strip from Cor!!  This strip appears in place of the usual Warner Brothers cartoon feature - hooray!

After the cinema show, Cheeky meets Disco Kid to assess the results of their campaign for more pop music on TV.  Disco Kid has been seen throughout the week holding placards emblazoned with pop music and TV show-related puns.  Cheeky solicits readers' views on the question of a music-only TV channel (it'll never happen, trust me).

The issue fittingly closes with a Pin-Up Pal poster of Disco Kid strutting his funky stuff.  This is in fact the second poster to appear this week - Calculator Kid is the subject of the poster on page 17, drawn by Frank McDiarmid rather than usual CK artist Terry Bave.

This week's issue loses one page to the Crack-A-Joke game, whereas the two previous issues each contained 3 game pages.  I would guess that this loading of cut-out game pages into the early weeks of the promotion is to lessen the impact for those readers who started buying the comic after the first 2 weeks of the game.  The game sections printed from 09 September on are useless if one hasn't got the first part.  I wonder whether it was originally planned that there would be 2 game pages this issue, and that's why Gran's story is reduced to 2 pages, and an extra poster was therefore deployed to replace the planned second game element this week.

For the second week running there's a gratifying whole Cheeky's Week of pure Frank McDiarmid art.  Frank does his last pure art on the Sunday evening feature, which will be coming to an end next week.  Frank also provides the main cover pic and 2 posters.  Excellent!