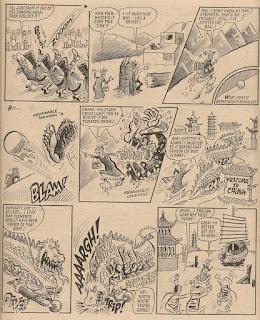 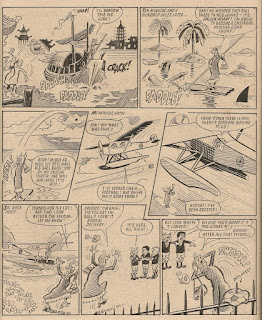 Following my previous post, I have completed my re-evaluation of all the artwork that I previously attributed to Mike Lacey. This was an interesting project as my realisation that the work displayed in the link above wasn't Mike's enabled me to look at artwork that I have studied many times before in a new light. As a result the artwork credits associated with 130 Cheeky Weekly elements have been changed.

The question of course is, if these elements were not drawn by Mike Lacey, who was the artist? As discussed earlier in this series, the similarity of Jimmy Hansen's style on The Bumpkin Billionaires in the late 1980s to that of Mike's was what alerted me to the possible mis-attribution, and the very helpful comments from some readers of this blog also made it clear that the two artist's styles had been hard to distinguish for some time. Thus, my best guess is that Jimmy is the artist in question.

There were 2 episodes of Speed Squad that always seemed to me to be by an artist other than the regular one (who I now believe to be Jimmy) although I couldn't identify who was responsible, and therefore they remained uncredited. While studying these particular stories again, I came to the conclusion that the mystery artist is Colin Whittock, so I have updated these database entries as well.

This re-attribution of artwork credits has necessitated updates to the following posts...

I have also tried to capture and update any sundry mentions of Mike, that I now believe to be Jimmy.

What I haven't yet done is re-generate any of the tables in the affected issue summary posts, aside from the 2 indicated above (these were the first two issues in which Jimmy contributed to Cheeky's Week  - I have yet to do a post about the third). Please accept my apologies for this. I've been aware for some time that I need to assign presently uncredited episodes of Creepy Sleepy Tale to Keith Reynolds, so I'll wait until I've done that before embarking on a mass update to the issue summary posts. UPDATE 17 November 2018 - I have now updated all the 'contents' tables in the issue summary posts covering Cheeky Weekly issues 1 to 96. This means that the contents now show Keith as the artist on the CST elements that he drew, and also Jimmy Hansen as the Skateboard Squad and Speed Squad artist for this run of comics. The summaries for issue 97 onward have shown the correct artist details for Speed Squad so they don't need amending.

(Update 04 October 2017 - I have now realised that when reassigning artwork credits from Mike Lacy to Jimmy Hansen I missed Jimmy's work on the 16 June 1979 Cheeky Hustle booklet, so have revised the table below to include those pages)

Update 03 September 2020 - Reattributed the 'Skateboarders! Super News' artwork on the cover of the 28 January 1978 issue from Mike Lacey to Jimmy Hansen - I'd missed this when revising the credits back in 2016.

Update 06 September 2020 - Reattributed the 'Skateboard Issue' artwork on the cover, and the Skateboard Snap game, in the 04 February 1978 issue from Mike Lacey to Jimmy Hansen - I'd missed this when revising the credits back in 2016.

Update 15 September 2020 - Reattributed the 'Great News for Skateboarders' artwork on the cover of the 29 April 1978 issue from Mike Lacey to Jimmy Hansen - I'd missed this when revising the credits back in 2016.