Back in 2013 Russ Juckes responded to my Space Family Robinson post, informing me that John Richardson was the artist on the first 23 episodes of the sci-fi thriller. Until reading Lew's post above I'd never realised that the original Robinson artist was the same person who illustrated Mystery Boy (although, assuming it wasn't a reprint like Mystery Boy, the Robinson artwork was completed some years later than the World War II adventure). 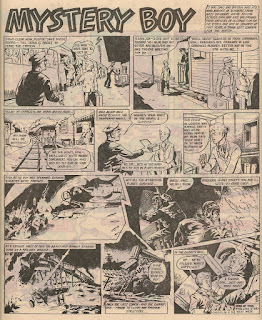 Lew Stringer is looking back at Cheeky Weekly from forty years ago this week. Thanks to Lew's post I now know that Mystery Boy was drawn by John Richardson.
Posted by Niblet at 14:35 4 comments:

Last month I finally got round to assigning the relevant Creepy Sleepy Tale episodes to Keith Reynolds, and following on from that I have now updated all the 'contents' tables in the issue summary posts covering Cheeky Weekly issues 1 to 96. This means that the contents now show Keith as the artist on the CST elements that he drew, and also Jimmy Hansen as the Skateboard Squad and Speed Squad artist for this run of comics (longtime followers of this blog may recall my Mike Lacey and Jimmy Hansen crisis of a couple of years ago when I realised that I had wrongly assigned the two strips as being drawn by Mike). The summaries for issue 97 onward have shown the correct artist details for Speed Squad so they don't need amending. The artist credit for the Disaster Des strip in Cheeky Weekly dated 13 October 1979, the only time that Des was illustrated by Jimmy, was updated in the aftermath of the 'crisis', some months before I originally posted that particular issue summary, so does not require amendment.

However, while applying these revisions I noticed that two issues had Cover Features promoting Creepy Sleepy Tale which used artwork by Keith (18 February and 03 June 1978), to which I hadn't previously assigned artist credits. I therefore updated the database entries for these 2 issues before regenerating the contents tables, but those changes mean I have also had to re-run the following...

Cheeky’s week begins with a chilly paper round and it starts to snow just as he enjoys a cover quip with Petula. Overleaf on the Sunday page a considerable fall of the white stuff is in evidence, and Frank McDiarmid slips in a reference to the end, in November 1979, of the industrial dispute which halted publication of The Times newspaper and its supplement-packed Sunday companion for almost a year – obviously this gag was a bit out of date due to the unavoidable lag between completion of the page and publication. Nevertheless I imagine the joke was appreciated by many a broadsheet-encumbered newspaper girl and boy. The blank billboard is a bit of a puzzle – the lettering of the ‘please write your own joke’ message is not by Frank McDiarmid. Were the original billboard contents removed? The page ends with a meaty gag but Mr Mutton is absent since his shop is closed


The microchip machinations of Calculator Kid’s electronic advisor deny Charlie a breakfast. The local bird population benefits, and a peckish Charlie sets out into the streets. It would seem that this story occurs early on Sunday, before the residents of Krazy Town were troubled by snow. The tale ends at a porridge-eating contest (referencing the huge popularity of porridge-eating contests in the late 1970s), and you can guess who takes the prize.

Cheeky's Monday follows a page of Paddywack gags, and Krazy Town still has a covering of snow as the toothy funster enjoys the usual banter with his pals.

Rain, not snow, is the problem for Mustapha Million and his chums as they try to enjoy a footie game. However, Mustapha was never shown to be resident in Krazy Town (initially he was presented as a fictional character as far as Cheeky was concerned) so the variance in weather conditions need not trouble us.

Following directly from our middle-eastern mate are the junior troupe of aspiring performers and their showbiz-hating tutor who make up the main cast of Stage School. Contrary to the climatic conditions apparent in Cheeky’s world this week, the weather seems fine as Sir sets the kids an initiative test by driving them out of town then abandoning them to find their own way back to school. Of course this particular strip’s relationship to Cheeky’s universe was never specified, as the feature commenced in the 07 July 1979 'new look' issue, a week after the Mystery Comic concept was dropped, and at a point in Cheeky Weekly’s evolution when the framing sequences which for a time explicitly established a relationship between each of the non-Cheeky’s-Week contents of the comic and the toothy funster’s pages had, with one exception, been abandoned*.

The resourceful kids raise some cash and catch a number 6 bus going to Kensal Rise, an area of north London. Unless the bus route has changed in the intervening years, a number 6 does not usually terminate at Kensal Rise – the full southbound route runs from the delightfully-named Bertie Road, Willesden, to a stop designated Aldwych/Drury Lane in central London. I would have expected the Stage School kids to have waited for a bus that would take them to Drury Lane, often described as 'the heart of London’s theatreland'. However, I suspect that the bus route reference is a private joke – possibly one of the staff in the Cheeky Weekly office lived in or around Kensal Rise. In 1980, Cheeky Weekly publisher IPC was based at King’s Reach Tower, so I used Transport for London’s Journey Planner to devise a route from Bertie Road to Stamford Street, the location of that famous edifice, to see what route a Willesden-based IPC employee might take to get to work. The first route suggested by TfL didn’t involve travelling on the number 6, but it did use the Jubilee underground line, which began operating in May 1979, and I wondered what would be the effect of excluding tube travel from the journey. Having removed subterranean commuting from my request, I updated the page and found that the suggested route takes our putative north-London-dwelling Cheeky chappie or chappess on the number 6 from Bertie Road to Kensal Rise rail station, and thence by a combination of train and foot, to postcode SE1 9PS, the location of South Bank Tower, formerly King’s Reach (not only has the name of the building changed since the time of Cheeky Weekly - the postcode in those days was SE1 9LS). 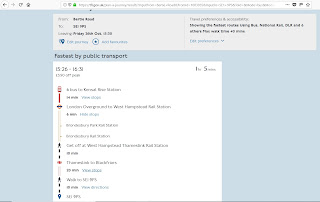 * The 6 Million Dollar Gran story in the 14 July 1979 issue was the final strip to feature a framing element. For more info see here.

On Tuesday we see that someone (possibly Sid the Street-Sweeper?) has kindly cleared the snow off Lily Pop’s zebra crossing.

There are cold conditions for Soggy the Sea Monster's reprinted escapade, but not due to the chill affecting Cheeky's home town. The silly sea serpent ventures up to the frozen north and gets hooked by a local fishing through a hole in the ice. Needless to say he doesn’t end up in somebody’s frying pan alongside some chips.

This week’s Why, Dad, Why? Shows Dad and Son heading for the pictures via streets clear of snow, but the strip was originally included in the Mystery Comic so was a work of fiction set in an unspecified location as far as Cheeky was concerned.

It’s cover co-star Petula’s turn to feature in the Cut – Out Comedy Catalogue which, as one might expect, is full of animal jokes.

The link between Cheeky’s world and that of Elephant on the Run (initially a strip in The Mystery Comic as was the above-mentioned Mustapha Million) became an ambiguous one when Elephant and The Man in the Plastic Mac appeared on the Wednesday page in the 12 May 1979 issue. Their adventure this week is a snowy one, suggesting that they may indeed share Cheeky’s universe.

The next strip, Disaster Des, also originated in the Mystery Comic and was firmly set in Des' home town of Doomsville, so it's no surprise to see the streets clear of snow as Des mooches along, unconcerned by the mayhem he's unwittingly unleashing as he goes. However, the majority of the story focuses on Doomsville's long-suffering Mayor, who finds that he can't escape the negative influence of the junior jinx even while on a well-deserved cruise (although choosing the Bermuda Triangle was pushing his luck somewhat).

The Gang's reprinted adventure from Whizzer and Chips is also untroubled by snow as the youngsters prepare to enter a vintage car in an 'old crock's race', which was one of those terms that was, as far as I'm aware, only ever used in comics, never in real life. See also 'spifflication' and 'slap up feed'.

There's no sign of a thaw as Cheeky does his Thursday round of jokes and japes, after which Tub, who is the last of the former Mystery Comic inhabitants to appear this week, gets stuck in the turnstile at a football match, with no snow to be seen.

Speed Squad, who were shown to occupy Cheeky's Krazy Town setting while appearing under their former title of Skateboard Squad as well as in their current guise, are pleasingly enjoying a tobogganing session as their story commences, the snow depicted as they race downhill matching the icy conditions evident in this issue's Cheeky's Week strips.

Cheeky then enjoys a frosty Friday, following which there's a 6 Million Dollar Gran spot-the-difference puzzle, the artwork for this filler having been lifted from her adventure in the 17 March 1979 edition. This is Gran's only appearance this week, her usual strip is absent.

Following 2 pages of readers' rib-ticklers in Joke-Box Jury, is another filler (although just half a page this time, sharing its location with an ad for IPC's sports-inclined title Tiger which next week, as part of the publisher's unwavering campaign to encourage readers to dismantle their comics, will be commencing a 1980 Winter Olympics booklet pullout) in the form of Jogging Jeremy's 'weak'ly exercise routine.

There are some more insights into life in the Cheeky Weekly office on the Chit-Chat page. Which of the chuckle crew live in Kensal Rise? 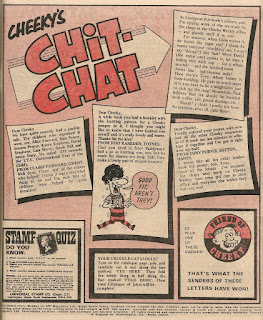 It's still snowy underfoot on Saturday, as the toothy funster learns of Crystal Belle's 1980 predictions for some of his pals (the impending move into the pages of Whoopee! not being among her prognostications). Our grinning pal then signs off, although he's featured on the back page in Snail of the Century, in which we see that the chilly conditions are also affecting Snail's back-yard buddies.


This week's cover co-star Petula makes her final Cheeky Weekly appearance in this issue (as well as the cover she also appears on the Cut-Out Comedy Catalogue and on Saturday), along with...

I think all readers will have enjoyed this issue at least as much as Frank McDiarmid enjoyed drawing the snowy Cheeky's Week.