The features - The Burpo Special

While the format of the Cheeky's Week elements of the toothy funster's own comic was clearly based on the Krazy strips 'Ello it's Cheeky and 'Ello I'm Cheeky, The Burpo Special was the only strip to appear under the same name in both Krazy and Cheeky Weekly.

In Krazy, The Burpo Special evolved from a feature called Cheeky's Pal, each episode of which focused on one of a rotating band of supporting characters from Krazy's Cheeky strips, with the toothy funster himself occasionally introducing the action. However, Baby Burpo introduced the Cheeky's Pal strip in Krazy's 17 December 1977 issue, saying “For this week's Burpo Special, me tell you all about Jogging Jeremy – Cheeky's pal from his own comic”. Despite Burpo's opening comment, the strip was titled Cheeky's Pal rather than The Burpo Special, and it was also the first time that Burpo had hosted such a page.

Krazy's Cheeky's Pal series continued intermittently, with occasional appearances by Burpo. The Cheeky's Pal in Krazy dated 18 March 1978 had a Burpo Special sub-heading, but the penultimate issue of Krazy, dated 08 April 1978 included a strip titled The Burpo Special, the subject of which was Bump-Bump Bernie in only his second Krazy appearance. This was the only Krazy strip to bear The Burpo Special as its main title.


The Burpo Special then appeared to have perished along with Krazy, (although there was a page in the Cheeky Annual 1979, published in September 1978, that would seem to have been intended for Krazy but never included there, which the terrifying toddler introduced as a Burpo Special although its title was The Doors Are Open) until the feature was resurrected in the truncated Cheeky Weekly dated 09 December 1978. Burpo introduced the revived strip, saying “Me back with another series of Burpo Specials. Me going to interview famous people for you”. The subject of this initial outing of the Cheeky Weekly run of Burpo Specials was Lily Pop.


All the subsequent Burpo Specials (the feature was absent for just 4 issues between 09 December 1978 and 30 June 1979) followed the same pattern - Krazy Town's teeny terror would interview one of the Cheeky cast, using a carrot instead of a microphone when the strip was drawn by Frank McDiarmid.

Burpo himself was the subject of the 16 June 1979 Burpo Special.


The first 11 Burpo Specials were in black and white, but thereafter the strip moved to the back cover and consequently the remaining 12 episodes were in colour. The notorious nappy-wearer suffered a bout of Cheeky Weekly Inconsistent Hair Colour Syndrome when, in the 19 May 1979 strip, he was depicted with brown locks.

A Burpo Special in all but title kicked off the run of Cheeky Weekly Star Guest appearances in Whoopee! dated 07 April 1979.

As mentioned above, the final Burpo Special appeared in Cheeky Weekly dated 30 June 1979, and the following week the comic was revamped with a 'new look'.

It's generally accepted that after Krazy folded, its surviving strips merged with Whizzer and Chips, but as we have seen, The Burpo Special actually transferred posthumously from Krazy to Cheeky Weekly.

The strip's title was based on that of the 70s TV series The Burke Special.

The Burpo Special in the Cheeky Weekly Index

A series of IPC's promotional Star Guest strips commenced in humour titles Cheeky Weekly, Whizzer and Chips with Krazy Comic (WCK) and Whoopee! as of 31 March 1979, concluding in each of those titles' issues dated 28 July 1979.

The guests in the Star Guest runs were sourced as follows;

Whoopee! presented characters from Cheeky Weekly (and presumably WCK – I don't have any Whoopees from the period in question).

As was the case with the first Star Guest of the 1979 run in WCK, it's a little surprising that Cheeky himself, being the lead character in the comic, wasn't the subject of the initial strip to represent Cheeky Weekly in Whoopee! (although Whoopee! readers were treated to a glimpse of the toothy funster's grinning fizzog at the top of the page).  However, this Burpo Special variant does introduce readers unfamiliar with the toothy funster's comic to a number of Cheeky's pals, and it's pleasing that the artwork is by the mighty Frank McDiarmid.

The promotional blurb at the bottom of the page suggests that readers could enjoy a Burpo Special in every issue of Cheeky Weekly. The Burpo Special, which commenced in Cheeky Weekly's 09 December 1978 was absent from the 02 June 1979 comic and came to an end in the 30 June 1979 issue, expiring 4 issues before Star Guest reached its own conclusion.

This page was new and never appeared in Cheeky Weekly. In the same week that the above Star Guest featured in Whoopee, Spiv was under interrogation in a colour Burpo Special in the 07 April 1979 issue of Cheeky Weekly.
Posted by Niblet at 15:00 No comments:

Cheeky on a Shoestring

The Chit-Chat page in Cheeky Weekly dated 12 January 1980 included a letter from reader Douglas Bell telling our toothy hero that he had spotted a copy of his favourite comic in an episode of BBC TV detective series Shoestring broadcast on 04 November 1979. 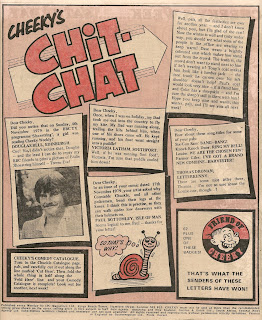 Cheeky hadn't seen the programme in question, but here are the scenes Douglas referred to... 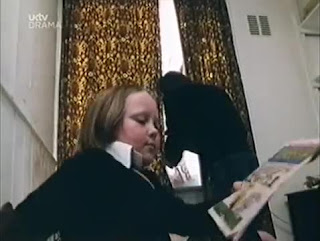 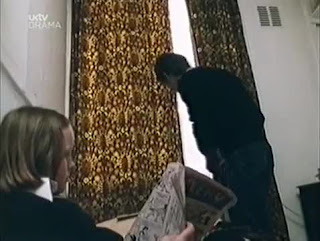 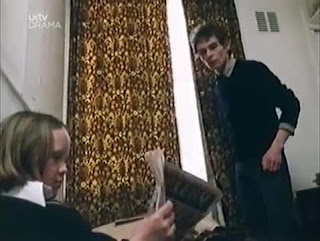 The issue featured in the episode is Cheeky Weekly dated 28 April 1979... 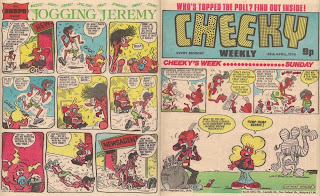 The full Shoestring episode, Nine Tenths Of The Law, is currently on YouTube. The Cheeky Weekly sequences begin at 07:05 and 11:08. UPDATE - this link no longer works as the episode has been removed.

For an earlier TV outing of Cheeky Weekly see here.
Posted by Niblet at 17:06 No comments:

Email ThisBlogThis!Share to TwitterShare to FacebookShare to Pinterest
Labels: Shoestring 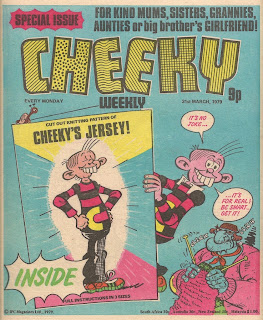 Here's something rather unusual for Cheeky Weekly's 73rd issue – the cover leads with the news that readers can sport their very own facsimile of the cheeky funster's trademark jersey. All that's required is wool, knitting needles (neither of which are supplied) and some proficiency in following the pattern printed inside this issue. So it's over to you, (as the cover announces in a blatant display of late-seventies sexism) 'kind mums, sisters grannies, aunties or big brother's girlfriend'. Good luck with that. Despite her clicking needles, Cheeky's cover co-star Granny Gumdrop is - judging by her skin colour - entering the final stages of hypothermia.

Page 2 wastes no time in establishing the knitting theme which runs throughout Cheeky's Week this issue – Cheeky announces in Sunday's first panel that Krazy Town's notorious knitter Granny Gumdrop is producing replicas of the toothy funster's stylish garb for all his pals. Judging by the attire of Constable Chuckle, Manhole Man, Doctor Braincell and Cheeky's parents, Granny's needles have already seen considerable action.

Cheeky Weekly's other Gran, of the 6 Million Dollar variety, is collecting her pension at the opening of her story this week. Quite how a robot came to be eligible for a pension remains unexplained. The synthetic senior citizen is outraged to discover a fake banknote among her cash, so decides to forge her own notes in order to lure the currency fakers to reveal their identities. It's not long before the aged automaton delivers the genuine forgers (if that's not a contradiction in terms) to the cop shop.

Granny Gumdrop is appropriately this week's source of the Mystery Comic, which makes no mention on its cover of the knitting pattern which is located therein.

Why, Dad, Why? is in colour on page 16 (sharing the centre pages with the colour cover of the cut-out knitting pattern) and the title banner at the top shows son suffering from the tweaked ear he receives at the end of the story, while Dad leers evilly in anticipation of the thrashing he will administer with the aid of a busted inner tube.

The instructions for Cheeky's jersey continue from page 17 to page 18, after which the Mystery Comic concludes with another thrilling Mystery Boy episode. Missing from this week's Mystery Comic is Elephant On The Run, bumped from the issue by the knitting pattern. 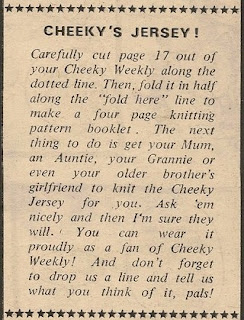 Returning to Cheeky Weekly, readers with a vacant space on their bedroom wall will be looking forward to loosening the staples in next week's issue after they've read the ad on page 21 – the toothy funster's comic will feature the first section of a Top Ten Poster as part of the Comics Go Pop promotion also appearing in companion titles Whizzer and Chips and Whoopee! Whoopee's Sweeny Toddler and Bumpkin kids are certainly getting excited. Apparently none of the stars of Cheeky Weekly or Whizzer and Chips were available for the ad.

Barrie Appleby, who has drawn all the Cheeky's Week elements thus far this week, hands over artwork duties to Frank McDiarmid as of the Thursday page, but the jersey japes continue.

Cheeky Weekly's participation as one of the host titles for the 1979 Star Guest run gets under way this issue with a promotional appearance by Whoopee's peerlessly parsimonious pater, Lolly Pop (who will make return Star Guest appearance later in the run) drawn by Sid Burgon. One might have expected the accomplished Sid, who was the regular Lolly Pop artist at the time in Whoopee! and provided weekly strips for most of the IPC humour titles of the period, to be among Cheeky Weekly's band of talented cartoonists. Only two pages of Sid's work appeared in Cheeky Weekly, both of which were part of the Star Guest run. In addition to the Lolly Pop page mentioned above, Sid delivered the Joker page that appeared in the 07 July 1979 issue of the toothy funster's comic.


The Pin-Up Pal poster on the back page, this week featuring the Skateboard Squad drawn by Mike Lacey, is the final one in the series.

This issue is another nice Cheeky Weekly special edition (see also the skateboard, 60 years into the future and Smurf issues), with the knitwear fun running through Cheeky's Week. It's a pity the theme didn't extend to the Skateboard Squad and Calculator Kid strips.

Other strips not participating in the pullover punfest are 6 Million Dollar Gran, Paddywack and all of the Mystery Comic features. However none of these stories take place in Cheeky's universe, so the lack of knitwear references is understandable. The intrusion of the knitting pattern into the Mystery Comic is purely due to the mechanics of the Cheeky Weekly printing process, so presumably isn't actually to be considered as part of that perplexing publication.

Some loose strands to knit together with this post -

The Chit-Chat page in Cheeky Weekly dated 19 May 1979 contained an admission regarding the jersey pattern... 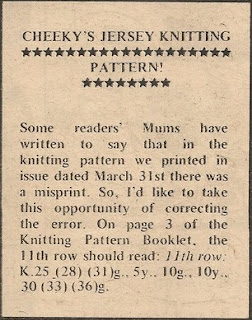 But 11 August 1979's Chit-Chat proved that some jerseys had been successfully completed... 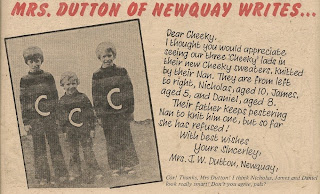 As mentioned above, Barrie Appleby and Frank McDiarmid share the Cheeky's Week art duties this issue, each contributing 4 elements.