The Cut-Out Features - All About Skateboarding

Last November I posted the first in a series concentrating on Cheeky Weekly's cut-out features (of which there were many). In that post I said More Joke Strips, appearing in the 12 November 1977 issue, was the first feature that readers were invited to remove from the comic. Nobody spotted my deliberate (ahem) mistake. The first cut-out feature actually commenced the week before, when the comic dated 05 November 1977 carried the first of 4 instalments of the All About Skateboarding booklet.

The sport/leisuretime activity of skateboarding was of course one of the many crazes of varying hazard levels that captured youngsters' imaginations in the 1970s (see also Clackers, Yoyos, Rubik's Cube). Many British kids were no doubt enticed into trying their skill on a board after watching TV clips of juvenile Californians pursuing the hobby under perpetually sunny skies. Propelling a board through cold, windy British streets with rain lashing into one's face was an entirely different experience.


The Cheeky Weekly editor, no doubt hoping to latch onto the skateboarding bug while in its ascendancy, evidently felt a 4-part booklet giving boarders (and those hopefuls who had included a board on their 1977 Christmas list) a few tips, tricks and safety hints would prove popular enough to retain the comic's existing readers and also gain some new ones.

Drawn by Peter Maddocks, the All About Skateboarding booklet was published in four 2-page instalments (with each page designed to be folded into 2 booklet pages) in Cheeky Weekly issues dated 05 November to 26 November 1977. The toothy funster appeared on the booklet's cover along with Cheeky Weekly's resident expert boarders Skipper and Skatie, from the Skateboard Squad. Snail was also present, recklessly mounted on a speeding board without any safety equipment, and seemingly inches from a shell-shattering collision with his grinning pal. 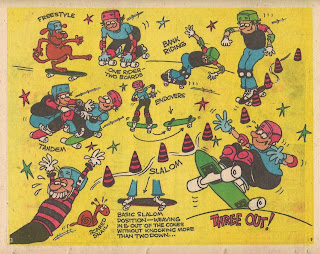 Skipper, Skatie and Cheeky also appeared in the booklet's centre spread along with the canine member of the Skateboard Squad, Wipe-Out. Snail was again in evidence, but wisely on foot although he seems to be involved in yet another near-miss with his toothy chum. Cheeky's Jersey is missing its trademark 'C' (as it was on the booklet's cover).

Those on a tight budget weren't forgotten - the booklet included instructions on building a board from plywood and urethane wheels.

Also lost to posterity - providing the booklet pages were removed carefully, no other elements of the comic would be lost.

Another skateboard-related cut-out feature, the Skateboard Snap game, commenced in the 04 February 1978 issue of Cheeky Weekly, which was the special Skateboard issue.

George has given the banner on his excellent Wacky Comics blog a cracking Easter update. Sharing the header with a number of British comic luminaries is none other than our toothy pal. I'm sure Cheeky is chuffed to be in such exalted company as Dennis the Menace, Frankie Stein and Desperate Dan, among others.
Posted by Niblet at 14:56 4 comments:

Frank has a Bash at The Beano

While reading a copy of DC Thomson's Classics From The Comics (issue number 152), I was surprised to see this Bash Street Kids reprint, drawn by Frank McDiarmid, from a 1975 Beano. I was of course aware that Frank drew The Beano's Roger the Dodger for a number of years, but I didn't know that he also drew Bash Street. Does anyone know for what period Frank drew the Kids? 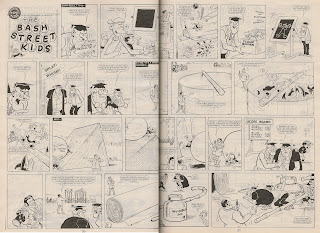 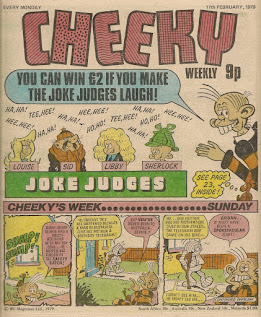 Reader participation feature Joke-Box Jury gets a front cover boost for the second and final time this issue - the previous occasion was just over a year ago. The prize on offer for readers whose jokes appear in the comic hasn't increased in the intervening months - it remains at £2.00, despite UK inflation running at 8.3% in 1978 and the price of Cheeky Weekly rising by 12.5% in the same period. A different panel of judges is shown on the cover this time, all of whom seem highly amused before they've even seen any jokes. Meanwhile in the Cheeky's Week…Sunday strip, Bump-Bump Bernie regales our toothy pal with details of his latest mishap. Readers with an aversion to scenes of a distressing nature will be relieved to find that the strip concludes just as Bernie's bandaged foot is about to make contact with that slapstick staple, the discarded banana skin.

There's a double the normal amount of comic confusion with Paddywack this issue, as he features on 2 pages.

Wednesday this week happens to be February the 14th, and consequently Cheeky tries his hardest to avoid Louise. He's forgotten that Wednesday is also Mystery Comic day…


The artwork on Mustapha Million has been shared between original Mustapha artist Reg Parlett and Joe McCaffrey since January 1978, but this week's issue is sadly the last to feature work by Reg. Mr P bows out with a colour spread, but unfortunately the somewhat pedestrian script gives him little scope for the slapstick, physical humour that Reg depicts so well. For a reminder of a Parlett peak, have a look at the corker of a strip he drew way back in Cheeky Weekly number 6, here and here. Thanks for all the laughs, Reg - the comic will be that little bit more dull without your inimitable contributions. 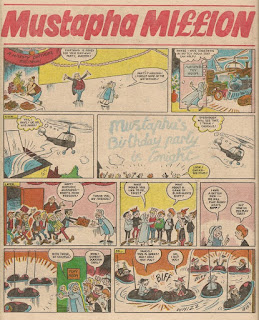 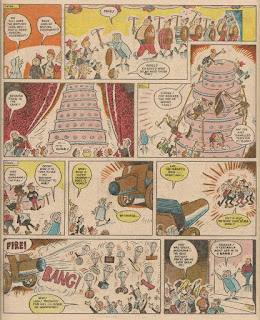 This week's issue contains what I believe to be two stories that were originally intended for the lost Christmas 1978 issue, and subsequently altered to remove the references to the festive season - Elephant On The Run and Skateboard Squad. The strips can be seen here and here.

This week's Mystery Comic section features a full complement of strips, with no absentees.

A new feature commences on page 24 - it's Tease Break, a half-page collection of puzzles. Tease Break shares the page with the final 'Your chance to vote' ad, in which readers are given the last opportunity to choose which celebrity they would like to see on the forthcoming poster.


However, those in more urgent need of a poster to cover the ink stain they just made on their bedroom wall will be delighted with this issue's Pin-Up Pal pic on the back cover, featuring Krazy Town's foremost TV addict Square Eyes, with which this issue draws to a conclusion.

Frank McDiarmid provides the art on all 10 Cheeky's Week elements in this issue.

Although he appeared in 23 issues of Cheeky Weekly, Krazy Town's long-suffering, snuffling newspaper seller was never named in the comic. I therefore refer to him as Newsvendor (not to be confused with Newsagent).


Whenever he encountered the put-upon purveyor of papers, Cheeky would target Newsvendor's placard and amend the text to (what he no doubt hoped was) amusing effect. These acts of textual vandalism would leave Newsvendor silently fuming at the affront to his noble profession, although Cheeky was of the opinion that the changes he made would boost newspaper sales.


Cheeky changed the wording on Newsvendor's placard in 24 issues of Cheeky Weekly, although the persecuted paper seller was himself present on only 23 occasions.


In his early appearances Newsvendor was, by means of an onomatopoeic caption, shown to be suffering from a snuffle which may have prevented him uttering the semi-intelligible yells traditionally associated with those in his line of work.


Cheeky Weekly dated 24 June 1978 was the only occasion on which Newsvendor spoke intelligibly, as he handed the toothy funster that week's issue of The Mystery Comic. On this occasion, the paper seller also defaced his own placard.


Usually depicted as being dentally deficient, in the 30 September 1978 issue Newsvendor suddenly developed a full set of teeth as Cheeky departed.


Over the weeks, the sullen scandal sheet salesman was seen beneath a variety street signs. By relocating his pitch he probably hoped to evade the toothy funster.

Newsvendor most frequently appeared on the Saturday page and the longest gap between his appearances was the 18 Weeks that elapsed between his penultimate outing in the 11 November 1978 comic and his final performance as Cheeky's stooge in the issue dated 17 March 1979 (although there were of course only 15 issues published between the two dates).


Couldn't resist finishing with this related classic sketch from Eric and Ernie...

Newsvendor - Number of appearances by Element